The Year of Pretending 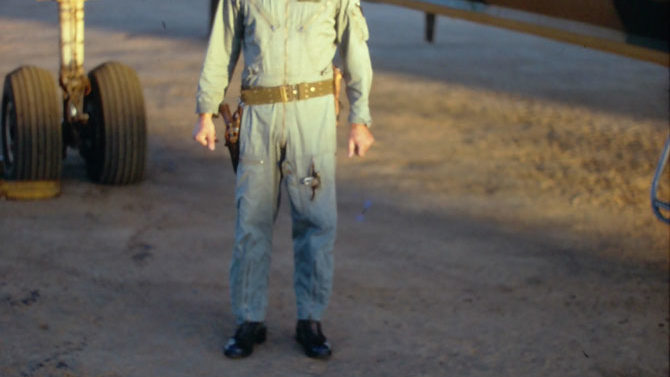 We agreed there was no reason to go through the canisters of slides handed down from my parents. We have the photo albums; we could just toss the slides and save ourselves a lot of trouble. But the one labeled “Vietnam” in my dad’s precise print caught my husband’s curiosity. There’s my dad in his flight suit with his plane.

I was 7 years old at the time, living with my mother and 9-year-old brother in Montgomery, AL. There aren’t any slides that tell our story from that year, but my most vivid memory was the night he was due home. The three of us stood outside staring at the airplane parked on the runway. Everyone had disembarked, so where was Dad?

It was 1969. For a year, we’d lived in Montgomery so my mom could be close to her parents while Dad, an officer in the Air Force, served as a supply pilot in Vietnam. We rented a brick ranch with fig and pecan trees whose abundant produce was just a burden—one more thing for my mother to deal with.

We sought help from strangers, including the kind couple next door, disturbing them around Christmas when we couldn’t make our tree stand work and the fully decorated tree fell over. And when a large package arrived from my dad with warnings written all over it, my brother took it to their house, afraid to open it with just his mom and little sister for backup, knowing what a prankster his dad was.

Sure enough, a real (but dead and stuffed) cobra posed in the classic striking position was wrapped inside. Disturbing in so many ways, this provided my brother with a new prop that featured prominently in his practical jokes throughout my childhood.

There were no scary packages for me but there was unknown territory. My first love ended melodramatically when my second grade boyfriend  snatched the necklace he gave me—a glittery button on a string—and flung it down onto a gravel driveway, furious that I preferred playing with my girlfriends to kissing him.

And this was the year of the now legendary “squash showdown.” My mom served me boiled yellow squash that looked pale and slimy. I declined even to try it. Mom insisted that I sit at the table until I’d eaten a bite. So I sat.

Hours later, when Mom was in bed, my brother snuck me my teddy bear in a secret show of solidarity. Even later that night, my mom woke me up; I’d slid to the floor in sleep. She demanded my surrender and offered terms: I could put anything I wanted on one bite. I chose to smother it in ice cream.

For years, I refused to eat squash in support of that act of protest, silently daring her to a rematch. Mom later said she regretted going so far over something so unimportant, especially considering how stubborn I am.

We were not a particularly religious family but that year mom made a tradition of praying together.  In the little hallway alcove meant for the phone, my mom created an altar with lace and a cross. We knelt before it and recited our assigned psalms.

I refused all invites from friends for sleepovers, never spending a night away from my mom for an entire year. I didn’t understand why but hoped my mom was right—once Dad came home, I’d be back to normal.

We were different in all sorts of ways that year, but carried on as if everything were the same.

Now the year was over, and my dad was supposed to be on that plane. My brother pointed to a man who walked out with a cane, wearing dark glasses and sporting a mustache. Mom laughed at my brother’s mistake.

The man limped past, none of us noticing that he stood a few feet behind us. When all the passengers had come and gone, my mom looked around perplexed and finally recognized her husband—the strange man standing behind us.

Dad wasn’t hurt. He didn’t need the cane or the glasses, and grew the mustache as part of the joke. That’s my dad. We laughed and hugged and went home to our little family celebration. There was a “Welcome Home” sign on the lawn, and I think we had cake. Dad had a martini.

Getting ready for bed that night, I pulled a dresser drawer out too far and it fell on the floor with a bang. My dad came tearing into my room, wide-eyed in anger. Maybe the loud noise startled him. His intensity made me cry.

I used to think Dad was pretending when he got off that plane looking like a different man, but maybe he was the only one not pretending.

The year was over, and once again we were a cohesive unit, ready for the next move.

Thrilled to have a real “hometown” after a childhood of constant moving, Kathryn has loved Athens in all her incarnations: student, activist, social worker, wife, mom, tennis player, zombie, cyclist and writer of stuff real and imagined. Send your Summer Slackpole submissions to editor@flagpole.com.