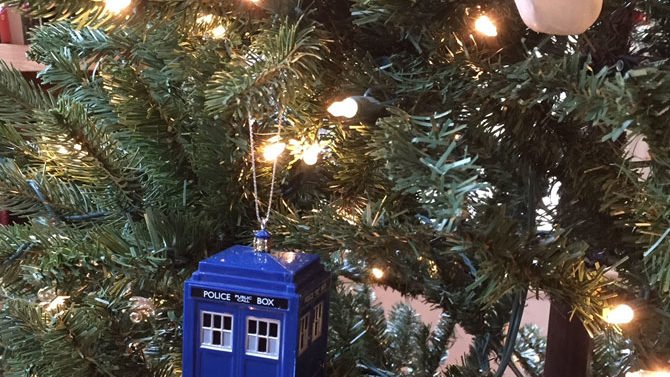 It appeared just after Christmas 2017. On my desk sat a bag bright with a cheeky-looking Santa. I thrust my hand into the tissue paper and drew out a blue rectangle with a string looped around the top. The words “Police Box” were printed on each side.

A co-worker said she had a late gift for me, but she didn’t know this about me—did she?

I like to forget I am a walking stereotype. I sent this co-worker a text: “Did you give me the TARDIS?” She texted back, “The ornament?”

Yes, TARDIS: Time and Relative Dimension in Space = “the ornament.”

Like all Whovians, I harbor strong affection for the TARDIS, a time-traveling vessel disguised as a British police call box. This is just what my tree needed, and—thanks more to laziness than the superstition I claim—my tree stays up well past Christmas, so I hung it up as soon as I got it home.

Snuggled amidst fake pine-tree needles, it evoked tantalizing dreams. With a TARDIS, I could travel back, change a national election, reduce climate change and usher in world peace.

But Christmas was over, and I was feeling selfish. This was my TARDIS, and I would use it as a portal to my Christmases past.

The first voyage would be only two days back: Christmas Day 2017. Before we all left the house to go see Star Wars, I would find the leftover turkey hovering in a corner, its platter covered by a pecan pie, and put it in the fridge instead of leaving it out to spoil. This is what comes from trusting a vegetarian with the meat—no turkey sandwiches to nourish the Jedi resistance. I could delete this total fail from the family memory bank.

The next trip I’d make in my TARDIS would be to Christmas 1993. That year, my 5-year-old daughter made a last-minute request for a My Size Barbie. Amid peers giddy with the grasping opportunity of the season, she was coached to make a bold request. I assured her that Santa would surprise her with something wonderful—and that she would actually play with—but she hung on stubbornly.

When our bright-eyed little girl ran into our living room that Christmas morning, she eagerly surveyed the giftscape. Failing to find any “my size” present, disappointment flashed over her face, but infinitely sadder was the forced stoic enthusiasm that followed. You’d do almost anything to avoid seeing your 5-year-old hide her broken heart.

This was her secret litmus test. Any Santa worth believing in would bring her that doll regardless of what her parents thought. Santa failed her, and as Santa’s emissaries, so did we.

Yes, if I could go back, I would let Santa get her that damn scary Barbie, and I’d treasure every second of her joyous belief confirmed. More time for her to wonder about magic in the world would be a gift to us both, and the perfect job for a TARDIS.

My parents did a better job. Santa didn’t go all crazy, but there was always enough magic in the air to hang my hopes on. I don’t have a single childhood Christmas I would change until 1984.

I was in my 20s spending the holiday with my family. I unwrapped a gift from my parents, meaning my mom: a set of yellow canisters—tins of varying sizes covered with a strawberry design as ubiquitous in that time as ribbon-wearing geese for country-kitchen wannabes.

I frowned. Mom knew me better than this. My dad tripped over his quiet explanation that he’d won them in a tennis tournament. He could have had a trophy, but he had so many trophies, he thought it’d be nice to get me something.

Dad never got me gifts on his own, and after this Christmas, he would hedge his risks, buying me only bottles of booze.

I tried for a do-over. I softened my critical gaze, remarked on how useful they would be, how cool it was that he won them. Years later, when he’d visit me, I’d point to them in use, trying to make solid truth out of the slippery gloss applied in panic.

If I could go back, I’d unwrap those tins with joy, and he’d see my genuine appreciation for his intentions, no matter that it wasn’t my style, and that domestic gifts to women are generally ill-advised.

And that would be my gift to him: a glimmer of hope for a future I already knew. Our misaligned efforts to connect wouldn’t be forever doomed to miss their targets.

My TARDIS returns home in time for this Christmas, and I step out realizing that even these small, selfish-seeming ambitions are bigger on the inside: a desire to celebrate and protect our connections, which are stronger than our mess-ups. We can’t get it right every time, but we can have the grace to forgive each other and ourselves—even when we leave the turkey out.

PETA Wants Georgia to Get Rid of Uga