Singing an ‘American Tune’: How Yesterday’s Athens Informed My Present Self 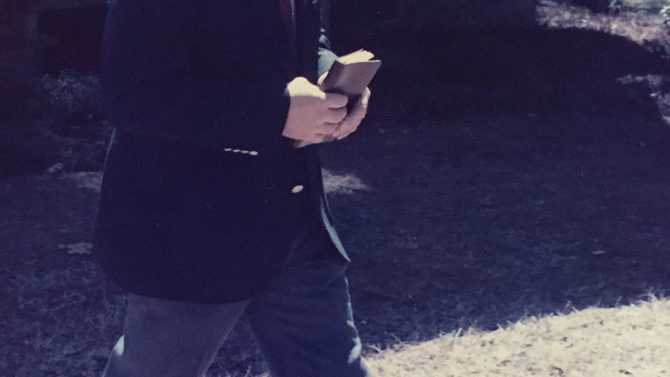 Like many who come to Athens, I moved here in my 20s. Some make their mark on this town in a big way fast and move on. But even if you stay in the background, live in a city long enough and your life becomes part of the cityscape. I’m not nostalgic for either the old Athens or the young me—I accept the current imperfect manifestations of both—but Athens has been like an older, cooler sibling who came of age beside me, our parallel arcs of evolution intersecting at key times.

When I was 22, I walked in front of an audience in the Memorial Hall ballroom. I carried an easel, set it up and inserted my hand into the wire handcuff attached to the easel. I pulled a headband over my eyes and began singing Paul Simon’s “American Tune.” I wore white painter pants and a McDonald’s T-shirt.

It was 1984, and when I moved here the year before, I quickly found the Athens chapter of the Nuclear Freeze movement, a national organization dedicated to raising awareness about the perils of the arms race and the need to reinvest resources into education, health and the environment.

My performance was part of a troupe of the absurd: The Nuclear Snack Bar Players. The name came from a pamphlet obtained by fellow member Mike Nicholson. Mike was an art professor at the University of Georgia. Among his favorite absurd aspects of the nuclear age were the preparations of FEMA. In the aftermath of nuclear war, there would be a snack bar. Our absurdity dimmed in comparison to the insanity of the times. Everything old is new again.

On my easel were the words “Status Quo.” I wince now at how uncool I was: dramatic and obvious and earnest. Our unofficial leaders were in their 50s, maybe. They were “old” because I was young. Besides Mike, there was Clyde Anglin, who also worked at UGA and picked up the occasional gig as a preacher for weddings of the unconventional—including my own, two years later.

Clyde loved Kurt Vonnegut and procured written permission from the author to use his short story “A Piece of Wood” as a performance piece. This story illustrated a basic premise: Nuclear weapons were just a symptom of an age-old problem: the warring mindset. Clyde and Mike believed the key to change on any scale started with our personal connections to different types of people, making it harder to turn them into the “other,” breaking down stereotypes and fears.

Cheery yellow cans in the grocery aisles evoke Mike and Carol Hokanson’s coffee-shop scene. They chatted about favorite coffee brands as the screen behind them showed images of global unrest, violence and poverty—the luxury of the trivial amid a world of chaos—and the inability to see that as privilege: “I like Chock full o’Nuts,” Mike said in all seriousness, referring to an actual brand.

Our group ended due to a confluence of transitions typical for Athens: Some started families, some finished school and moved away, and some became sick. By the time Mike and Clyde died, I was old enough to know that they were young. Vibrant men who walked the talk of their beliefs and visions for a better world, I miss them.

I imagine my 22-year-old self would be disappointed by my current status quo. Quieter with my opinions these days, I rationalize that I’m bridging the distance between myself and the “other.” She would call this a cop-out.

In January 2017, my path again intersected the mood sweeping through Athens and the wider world as I joined three buses full of Athenians headed to the D.C. Women’s March. No one action is a cure-all—it doesn’t redeem a past of inaction or excuse a future of denial—but it is, at the very least, a public gesture of private convictions.

Back in the ballroom where R.E.M. once played, I wore that blindfold because I couldn’t sing in front of a crowd with my eyes open. But my ideals were stronger than my fear of looking foolish, my convictions uncomplicated by shades of gray. I was, among other things, brave—even if I did wear a blindfold.

At the end of the song comes the fatigue of striving, the reconciliation of ideals with the reality of living, a struggle I barely knew at the time: