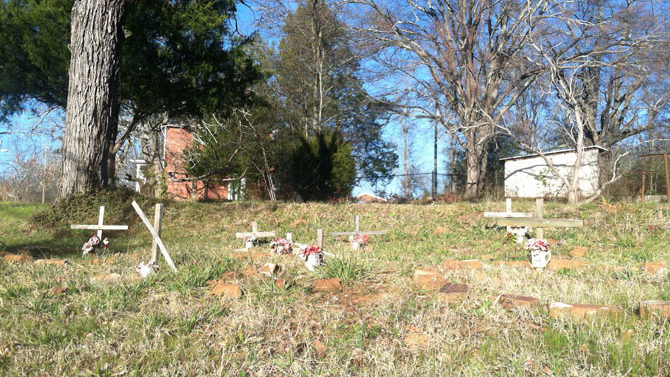 “Twister, Jam, Midnight, King.” Mary Howington unclasps her hands and picks at the oilcloth. “But Midnight was the worst.”

I’ve come to ask Ms. Howington about the crosses in her front yard. There are quite a few of them, maybe 10. They are crudely made, just sticks tied together with twine. I first noticed them years ago, while walking to my car from my office in the Chicopee building. Back then, it wasn’t quite clear what their purpose was. They were arranged somewhat randomly on a little hillock in the corner of the yard closest to the street. There were big ones and small ones; some were clustered together in little groups, and some were placed further apart from the others. It was likely that these crosses marked the graves of many somethings, but I wasn’t sure. The fact that they were arranged so close to the street, where everyone could see them, made me wonder whether there was some other reason for them. Maybe this was an art installation, or some kind of metastasized Mount of Calvary display.

And if these were graves, why so many of them? Vetstreet, a website for animal enthusiasts, reveals that the average American family has 1.83 dogs and 1.57 cats, for a total of 3.40 pets per family. So, according to these statistics, it’s clear that most American families have parts of pets lying around their households. But however many pets or bits of pets may be owned by a typical U.S. family, it’s nowhere near close to the number hypothetically buried in this particular front yard. 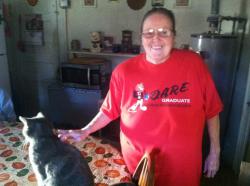 Ms. Howington sighs, remembering Midnight. I’m sitting with her and her mother, Evelyn Brooks, at their kitchen table, in the house they’ve lived in at least since Ms. Howington was born in 1954. In those 59 years, they’ve had time for a lot of pets, and this explains why there are so many graves collected at the edge of the yard.

“My Pop-Pop [grandfather], he bought this house we’re in now. He was the boss of the mill,” Ms. Howington says, pointing in the direction of Chicopee. “Back when it was Johnson & Johnson.”

That would have been around 1958, back when calling Athens the “Manchester of the South” made people think of textiles, not music. In those days, Ms. Howington spent her time swimming in a Trail Creek that was blue not from a giant Ty-D-Bol leak, but from the reflection of the sky. When the young Ms. Howington buried her first pet, a dog named Twister, in her family’s yard, it wouldn’t have been on the highly visible corner of two well traveled roads. It would have been an almost rural location, far more private and pastoral.

Ms. Howington continued to care for a menagerie of animals as the mill closed and the neighborhood changed around her. In the 1970s and ’80s, she watched the mill workers move away, replaced by African-Americans from other parts of Athens. These were families driven by high taxes from communities like Allenville to Ms. Howington’s neighborhood, commonly known as Chicopee-Dudley.

Ms. Howington describes relationships with her neighbors almost as close as the ones with her pets. “We’d keep an eye on each other,” she says. “There was Daisy and Darlin’ Thornton, who lived in that pink house across the street. They were farmers. That parking lot across the street from Chicopee? That was their garden, a huge one. They’d walk uptown every now and then and sell their jams and vegetables to the Mayflower Restaurant.”

What did the neighbors think of her pet cemetery?

“They’d come by and bring flowers, and we’d sing hymns and say prayers.”

These days, the neighborhood has changed yet again. The old families have died or moved, replaced by artists and students looking for cheap, conveniently located housing. The response to her pet cemetery has also changed.

“One time, someone tore up the crosses. I think they were drunk, because they left behind a beer bottle. It was probably just one of those students, trying to be a smarty pants. Another time, somebody called the police on me. They thought I was out there burying a body.”

“Yeah, that was Midnight,” she says. “He was so big that we had to bury him in a lawnmower box.

“But mostly, I get people pulling over in cars, asking what’s wrong. They don’t understand that I’m digging a grave. I tell them what I’m doing, and they just look at me funny, like, ‘Why are you going to all that trouble?’ I guess they think we should just dump ’em, or something. But I love animals because they keep you company. You can depend on them. They don’t talk back, and they cheer you up when you’re down. I think this [burying them] is the last good thing you can do for them, after what they’ve done for you.”

Ms. Howington has over 30 pets buried in the corner of her yard. They include not only cats and dogs, but also birds, rabbits and even fish. “We’ve got a lot of fish out there,” Ms. Howington confides. “We bury them on top of each other.”

Ms. Howington says that she doesn’t have any pets now, and doesn’t plan to get any more. “We don’t want to go through what we went through when Midnight died. It hurt us so bad.”

Instead, she borrows her neighbor’s cat, Topper, who’s been purring on the kitchen table through our whole conversation.

Ms. Howington agrees that the neighborhood is very different from the days when the mill made the diapers she wore, but she’d never consider moving. “My mother and her sister got married in this house. In the living room, right in front of the heater. You take away my house, you take away my life.”

On the way out the door, I mention that I have an 18-year-old cat with diabetes who surely, surely won’t be around much longer. Would there be a place for Pete in her well tended graveyard?

She’s standing on the porch of the house she was born in and will likely grow old in, and when she replies, I’m not sure whether she’s talking about her pet cemetery or the neighborhood she’s been a part of for nearly 60 years. “I’m sorry,” she says, “but we only bury our own here. You’ll have to find your own place.”