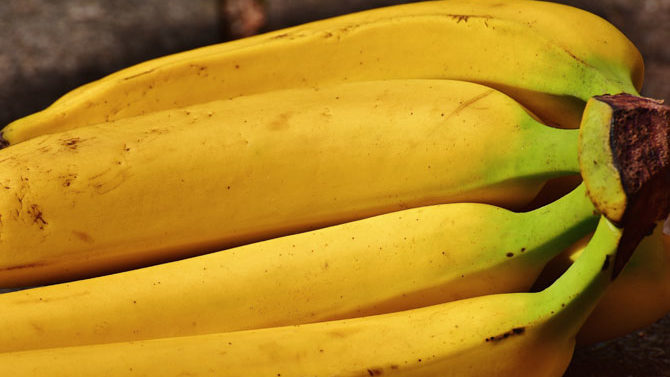 Andy and his family lived in one of the rental houses on Stokes Street in Monroe. Andy had died suddenly, a few days before. I stood with his widow and grown daughter in their living room, talking things over.

“Before you go,” said Andy’s widow, “Let me give you these bananas. Andy loved bananas, but nobody here eats ’em. We don’t want them to go bad.”

“Oh, I would not feel right about taking Andy’s bananas,” I said.

His widow reached out and squeezed my arm reassuringly. “He would have wanted you to have them,” she said.

Andy and his wife were in their early 60s, and were stable tenants. They mowed the lawn, they often paid the rent, and they kept an eye on the house next door. The house next door was also a rental unit, and was hard to keep occupied. A series of snakebit people lived there, people in and out of jobs and jails and hospitals. Andy called me often to keep me apprised. “Sherman bought another 200-gallon fish tank,” he’d say, or, “Fay’s daughter is running a prostitution ring out of the garage.”

When the house was empty, they’d talk it up to potential renters. “How’s the neighborhood?” asked one such lady, gesturing at the trailer park across the street.

“The only thing you’ll see on Stokes is someone being carried home from a party on a Saturday afternoon,” declared Andy’s wife, who had accompanied me to show the house. “No shootings. That’s all on Davis.” She pointed behind her, at the next street over.

One day, 10 minutes before I was supposed to show the house, Andy called me. “I have to talk to you right now, face to face—it’s urgent,” he said. I could hear cars and wind in the background, like he was driving.

“I’m at work,” Andy yelled into the phone. “I’m going to swing by and pick you up.” Andy delivered pizzas.

“No, Andy. I’m not going to ride around and deliver pizzas with you. I have to show the house.”

The prospective tenants pulled up in a yellow Camaro. What kind of 30-year-old man does not think to put a on a shirt when he goes to look at a rental house? His mother had driven the Camaro and would be the one signing the lease. They were silent, barely looking at the rooms as we walked through. I asked a question, and she answered me sullenly, like it was all my fault. After the tour, we stood outside. I held out a folded rental application. They stared at me with dead eyes. There was no way I was going to rent the place to these two people. They seemed like the kind who’d have no trouble killing you.

Behind them, I saw Andy’s battered truck pull into his driveway, the red and blue pizza light stuck on the roof. He sat there until the Camaro people left, then leapt out of the truck and ran across his yard. “You can’t rent the house to those people,” he said, panting.

“Duh,” I said. “Those two people were obviously murderers.”

“Because those are the people that killed my son,” said Andy.

I’d met Andy and his wife six years before. I was on my knees in the living room, scrubbing the linoleum, when they walked in unannounced. The woman was crying. “We’ll take this house,” said Andy. “We’ll move in right now.”

“Right now?” I said. These two would be my very first tenants. I hadn’t even put out a for-rent sign yet. “Renting a house is easy,” I thought.

“Our son was just murdered,” said Andy’s wife, sobbing. The story poured out of her, about how her son was partying with his so-called friends down by the party creek under the bridge, and how the police said it was drowning, because there was drinking involved, but that she and Andy had paid for an autopsy, and it didn’t account for the blunt trauma on his head, and we know who did it, and we have to get out of where we are right now.

I had not ever rented a house to anyone before. I had not even stood up from my scrubbing yet. I was not prepared for a story like this. They moved in two days later.

Now, Andy was standing in the yard, telling me the two people I’d just shown the house to had murdered his son.

“I don’t understand,” I said. “Why would they want to live next door to you if they murdered your son? Do they know you live here? Do they know that you know it’s them? Have you confronted them?”

“Everybody knows it was them. I went down there with my best friend to the party creek after they killed him. We were going to take care of it, but I never got to, because my best friend shot me with a nail gun.” Andy pulled up his pizza delivery shirt and showed me a vivid scar on his belly.

“Your best friend shot you with a nail gun?” I said. I felt like I was about to catch on fire. “He lured you out to the party creek to confront your son’s killer, and then he betrayed you?”

“No!” said Andy. “It went off by accident. He’s still my best friend. Listen, please, don’t rent the house to those people.”

“Andy, I would not rent the house to the people who killed your son.”

“OK,” he said. “Thanks.” He turned and started walking back to his pizza truck.

“Andy,” I yelled, “How did you know who I was showing the house to?”

“Word gets around,” he yelled back.

That night at dinner, we prayed for Andy and his son and his family. For dessert, we had bananas.

Editor’s note: Names have been changed to protect the innocent.