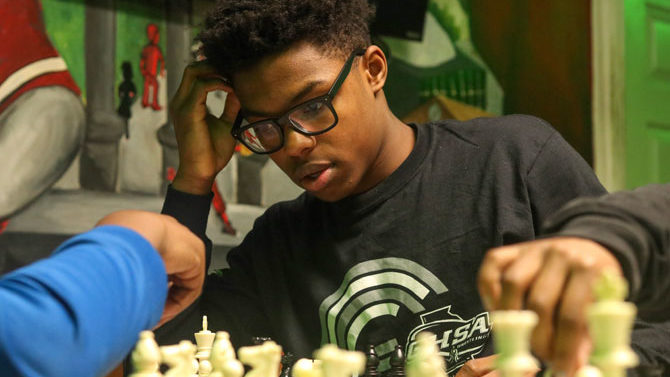 Chess and Community’s mission is to empower the youth of Athens through community service and educational enrichment. LaRoche, known as “Life,” seeks to change the mindset of youth in Athens in an unconventional way—through the game of chess.

“Chess is a game that challenges you to think from a different perspective,” LaRoche says. “The elders in my community taught me the same lessons when I was a child, and I want to teach every child who comes through how to look at life through the chess board.”

Chess and Community has expanded to Washington, DC, Greenville, SC and Columbia, SC. Teenagers and adults involved in those organizations will visit Athens this weekend for Chess and Community’s annual conference at the Classic Center. Those involved will participate in a chess tournament, essay competition, art show and more. In addition, the organization offers Chess Enrichment at the Boys and Girls Club every Wednesday and Thursday from 3:30–5:30 p.m., Open Chess Play every Monday at the Athens-Clarke County Library from 4–5:30 p.m., and Chess and Pizza every third Tuesday at Little Italy from 5–7 p.m.

LaRoche says he started the organization in order to equip the next generation to become leaders. To accomplish this, he teaches them about local and national government, and exposes them to new cities across the nation and overseas.

Each year, the children involved with Chess and Community are given the chance to earn trips to Atlanta and Washington, DC, and two years ago, LaRoche and other parent volunteers took a group to Ethiopia. Laroche says that if he can expose the kids to a world outside of their own, it will help them break the cycle of poverty and change their communities from the inside.

“I want to help the kids as much as I can, but I also realize that poverty is real, and that they have a lot of obstacles in front of them,” LaRoche says. “I want them to recognize who they are and that they control their own narratives.”

Since 2012, Chess and Community has sent 26 teenagers to college with a scholarship called “Think Before You Move.” One recipient was mentored by Laroche as a teenager within the juvenile system. That child is now an adult attending the University of Georgia, and Laroche plans for him to eventually become the executive director of Chess and Community.

The goal is for each child to implement the lessons from the organization in his or her daily life.

According to Dabriah Brown, the mother of a 13-year-old member of Chess and Community, the lessons taught to her child are echoed at home as well.

“I was having a rough day one day, and I’m in the car with Marcus, and I’m talking a mile a minute… and he looked at me and he says, ‘Mom, think before you move.’ and you know, that’s the theme for the club.” Brown says.

LaRoche’s motive is not only to help each child navigate their personal life, but to solve larger problems in the community. He wants to see an end to the “school-to-prison pipeline” in Athens by giving kids the tools to live out their dreams, no matter their socioeconomic background.

“I do it for my two boys at home, to be able to create a community where they can thrive. So even when I’m gone, we’ve built the structure so that all the kids know how to start these programs, and they can break the cycle of poverty,” LaRoche says.