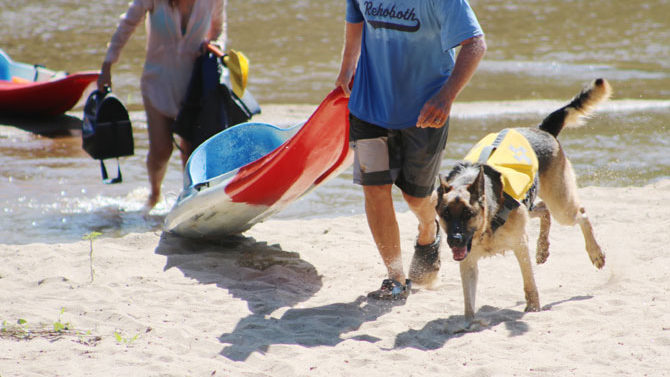 For many, beer is a must when floating down the river on a hot day. So, fewer people may be heading to the Broad River in Madison County following a recent ordinance that prohibits tubers and kayakers from bringing coolers or large quantities of beverages with them on their trip.

The ordinance, passed earlier this month, makes it illegal for Broad River and Hudson River outfitters to allow their customers to bring “glass, plastic, styrofoam or metal [containers] and containers known as cups, bottles or cans” on the river. Each person, however, can bring one plastic or metal bottle of up to two liters.

The ordinance addresses several riverfront property owners’ complaints about river-goers trespassing on their property and littering in the water and along the shore. “This is something that’s been going on for quite some time,” says Scott Edwards, a river property owner who coordinated the effort behind the ordinance. “The river is the last little bit of wilderness in this area, and it has become an amusement park.”

Since the mid-1990s, large groups frequently party along the river, often with alcohol, Edwards says. Beer bottles, cans, cups, coolers and picnic supplies end up abandoned in the water, floating onto private property areas. Often times, people may pull off the river and stop along the shore for hours, trespassing and littering in some people’s backyards, he says.

“A lot of the property is posted with signs. Once someone gets out of their boat and they touch the bottom of the river, they’re on someone else’s property,” Tom Krobot says.

Krobot owns over half a mile of property along the river; on a monthly basis, he has to clean up the trash left by river-goers in his backyard. “It never fails. I pick up anywhere from a half a case to a full case of bottles,” he says. “We own the property, we pay taxes on it, and we’re having to pick up other people’s trash.”

While Krobot and others have had some who stop on their property be “belligerent and aggressive,” most of the river-goers are respectful. “We’re more than willing to share our space with people,” Edwards says. “But 500 to 1,000 people a day, that’s when it becomes too much.”

According to Edwards, years of trying to get the outfitters to inform their customers about the private property and prevent littering and trespassing got them nowhere. “You know, you have to go through the outfitters to get on the river,” he says. “They have fences around their buildings so no one can get on their land, but they’ll put 500 people on the river to trespass on other people’s land.”

Eventually, the group of property owners got together and drafted an ordinance to present to the Madison County commission. “The problem has grown over the years,” Commissioner Lee Allen says. “There’s been more trespassing [and] more litter, according to homeowners.”

After two public hearings on the ordinance, the commission unanimously passed the proposal.

Both Allen and Edwards were quick to say that the ordinance is not an attempt to put anyone out of business. “Wherever you have many people gathering and you want to keep it pristine, you have rules,” Edwards says. “It’s just the tiniest, itty bitty, little mundane ordinance. We’re not asking for much.”

Moody is quick to call out the landowners, many of whom he says used to be his friends, saying their intention behind the ordinance was to get rid of the outposts altogether. “It’s not a question of cleaning up the litter,” he says. “I do agree there’s more litter than there should be, and we should work to fix that. But they should have worked with us, let us limit the size of a cooler, rather than an outright ban.”

Customers have said almost unanimously that if they’re not allowed to bring a cooler, they won’t come back, Moody says.

He calls the ordinance a “knee-jerk reaction” from “relatively wealthy, relatively new to the area” property owners. “They bought property on the most popular river in northeast Georgia. If you buy property on the river, you have to expect there’ll be garbage,” he says. “When they bought that property, they acted like it’s their river. It’s not; it’s a public river.”

Though two of the three area outfitters participated in the hearings and meetings leading up to the vote, Allen says, Moody and others are disappointed about the way the issue was addressed. “We would have appreciated being contacted by landowners before going to the commissioners,” says Sarah Owens, a representative for the outfitter Sandbar.

The ordinance will go into effect next year, and with the season winding down, the outfitters will have the offseason to get any necessary signage in place.

“We’ve had some customers ask about the ordinance, but we’re not entirely sure on the information yet, so we’re trying to get answers to give them answers,” Owens says.

Employees at the Broad River Outpost have been telling their customers about the new rule. “Some people seem irritated by it,” says Bret Eady. “But most people aren’t very informed about it yet.”

Under the rule, if someone is caught bringing a cooler or any other prohibited item, the outfitter that allowed them on the river is responsible. That part concerns outfitters the most. “I’m supposed to have someone down at the river and check what people are bringing on the river,” Moody says. “And if they sneak by and get caught, I pay the $1,000 fine.”

“There’s 100 people out here around noon,” adds Eady. “It’s hard enough to get them to get on the bus, much less listen to the ordinance that they can’t bring their beer on the river.”

An exception in an ordinance lets outfitters allow those with “specific medical or physical needs” to bring larger or multiple containers or coolers with them. Outfitters expect that exception to be abused by customers. “Medical information is private,” Owens says. “I have to take people at their word, and I don’t feel I should be held accountable for that.”

They also raise concerns about the safety of limiting each person to two liters of water, assuming they opt for a full two liters of water and forgo any alcohol. Northwest River Supplies recommends river-goers drink roughly a fourth of a liter every 15–20 minutes. People on the Broad River would be out of water after two hours at that rate. “Some people go in at 10 [a.m.] and come out at 7 [p.m.], and two liters is definitely not enough water,” Eady says.

A citizen is donating a boat to the Department of Natural Resources to assist the game warden in patrolling the river, Allen says, but some are still skeptical about the number of officials available to monitor the area. The game warden normally works in another county on the weekends, and the county is cash-strapped to hire more patrol, Allen says.

Moody says he intends to challenge the legality of the ordinance. Property owners “have their legitimate gripes, but their solution sucks, and it probably won’t stand up in court,” he says.