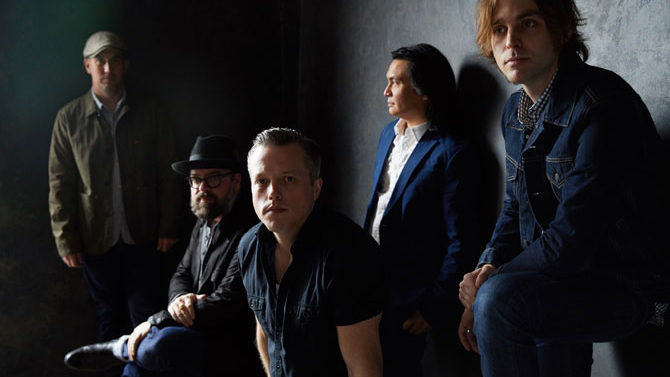 Jason Isbell’s The Nashville Sound is the summer soundtrack for those of us who fled small towns because of the sexism or the racism or the lack of opportunities, only to see all of those things amplified by the election of Donald Trump, rendering our hometowns almost hostile to our very existence.

“I used to think that this was my town/ What a stupid thing to think” the former Drive-By Trucker sings on “High Road,” the first single off the album. “Hear you’re fighting off a breakdown/ I myself am on the brink.”

It is a white man’s record about the problems inherent in whiteness and masculinity, but as always, Isbell doesn’t preach. He tells stories, and he does it with as much literary ambition as any songwriter out there. “Elephant,” off of 2013’s Southeastern, is one of the most devastatingly sad songs you’ll ever hear, suffused with an aching gallows humor.

I’d been struggling with these same issues: how to be a white man and not be a complete piece of garbage. So I figured I’d talk to Isbell about it, and about music and literature and other things.

Baynard Woods: Like you, I was born a Southern dude who left there, and I’ve identified some with the the ways you struggle with that. It seems to be up front on this album. When “High Road” first came out, my wife and I both really felt like it was the first art that spoke to how we felt about our families and stuff at this moment. Did you write that after the election? Did it inspire that?

Jason Isbell: I think that one was probably written before, but not long before, you know. “White Man’s World” came after. But, you know, the climate was the same. The election was sort of a sneeze. I think the cold has been lingering for quite a while now. I don’t see the election as the culmination of the problem, I see that as a symptom of the problem. But if you’re going to make a good story, you’re going to need a good setting, and the only way for me to tell people what the world is like right now before I can move on to narrative considerations is by explaining the climate, you know, the cultural social climate, and that, to me, just can’t be discussed unless you bring up the divide in what people call politics.

BW: I feel like, in especially “White Man’s World,” there’s the sense that being white men, especially Southern, places us on the wrong side of history in a lot of ways. You end the song talking about the fire in your little girl’s eyes. Did having a daughter help you grapple with masculinity and whiteness and all that stuff?

JI: I wouldn’t say it changed the way I looked at it, but it certainly made me more inspired to speak out about what I believe, you know. I think I’ve felt the way that I feel for a long time, but when she came along, I thought, “I’m going to have to tell everybody how I feel now, one way or another, because that’s what I want her to see, and if there’s any way I can make the world a better place for her, then that’s what I’m going to have to try to do.” But it didn’t change my beliefs, and I think that’s how people are able to be white men with daughters and still be bigots, you know, still be misogynists.

And what you said about being a white man, in certain ways it puts us on the wrong side, but I think more than that it gives us a responsibility. I’m not going to feel guilty or ashamed about being a white man. I think those are terms that people who are on the other side of the argument use. The criticism I’ve received from “White Man’s World” comes in the form of proud white men saying, “I don’t have any shame or guilt for being a white man.” But nobody should really have guilt or shame about something they can’t control. I’m born a white person. The guilt and shame would come in if I didn’t use my privilege to try to make the world a better place for other people. That’s where the guilt and the shame comes in—if you’ve spent your whole life just enjoying your privilege, and never actually working for it by trying to level the playing field for other folks.

BW: Yeah, when you sing about wishing you’d never pretended not to hear another white man’s joke, like growing up or whatever, it…

JI: Yeah, I didn’t do it every time. But I wish I’d spoken up every time, now. The older I get, the more I think I should have said something every single time I heard the N-word in elementary school, or every time I heard someone make a joke about women or Mexicans in a bar when I was growing up in Alabama. If there’s any regrets as I’m getting older, it’s that I didn’t stand up for people as often as I could have, and I think really that’s what I’m talking about in that song is, since all these doors are already open for me, being a white man, my job is to try to hold them for the person behind me or the person in front of me, to try to open them for someone they might be locked for.

BW: So, I also write about politics, and I’m going to see Jeff Sessions testify tomorrow.

BW: What would you say to ol’ Beauregard if you could take him back behind the barn and give him some advice or something?

JI: He should have stayed in Alabama. It will be too much scrutiny for a boy like Beauregard. It’s heartbreaking for me to see all these real serious bigots coming up and getting good jobs and being in control of some shit. I don’t know where to start with Sessions. I mean, his idea of marijuana, first of all. I think if maybe he would smoke some of the marijuana, he would realize that people are all the same, and that smoking a joint once is not going to kill you. There’s no crack rock in a joint.