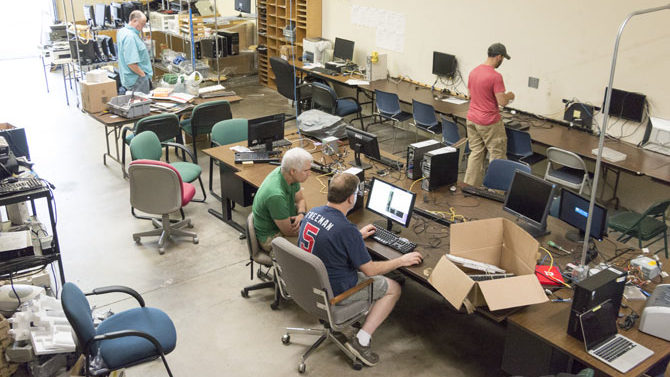 While most ribbon-cuttings involve a colorful bow, Jonathan Smith, president of Free I.T. Athens, thought it would be more appropriate to officially open his organization’s doors by cutting a parallel ATA data ribbon.

If you don’t know what that is, don’t worry, no one else does either—unless you happen to be the type of person who volunteers at a nonprofit that refurbishes old computers.

An advocate of free technology and free software since 2005, Free I.T. has distributed more than 2,000 computers not only in the U.S., but Cameroon, Peru and El Salvador as well. It’s also working to reduce e-waste in landfills, which is responsible for the majority of toxic waste buildup beneath the rubbish, according to Smith. The group has collected over 100 tons of computer equipment that would have otherwise ended up in a landfill.

Having gone from a basement on Prince Avenue to a warehouse space on Chase Street, Free I.T. has now found the ideal location in the Homewood Shopping center. With a storefront, it can utilize its main attraction—cheap computers—to draw in foot traffic and spread the message of what it’s doing.

Right now, the store is open Sundays from 1–5 p.m., Wednesdays from 6–8 p.m. and Fridays from 3–7 p.m. “One of our first orders of business is to expand those hours,” says Treasurer Paul Walker. The group also hopes that with the new space, it can draw more volunteers and add regular classes to the schedule, in addition to the tech support offered.

Volunteering at Free I.T. has its own benefits. While helping to reduce e-waste and refurbish computers, volunteers get to take home equipment after a set number of hours, and no experience is needed to sign up.

The whole process starts in the back of the store, outside, where donations are dropped off and then triaged by the team. Since data mining is a real and dangerous threat, Walker assures donors that they take every precaution.

“We pull all the hard drives first. We want everybody to know that when they donate, not only are they keeping things out of the landfill, we take it very seriously,” he says. He motions to a row of tables with monitors on the wall and cords snaking their way beneath. “This station right here is for wiping hard drives. They get double wiped. If it’s impossible to wipe, we destroy them with hammers.”

After destroying any information that comes in with the e-waste, they recycle what they can’t use through a verified recycler called VIA Technologies. Once data has been wiped or hammered to bits and parts salvaged or kept, the donations either become new used computers for a volunteer or walk-in purchaser, or the parts will be separated and kept in bins, available for purchase at a low cost to those in need of computer components.

While the work of recycling, refurbishing and redistributing hardware is a big part of what Free I.T. does, there are other important parts of its work. The mission statement on the wall proclaims that closing the digital divide is a key concept, as well as technology education, free software and open alternatives. Diversity is a key goal. “All things tech have a pretty big diversity problem,” Smith says. “We try to address that.”

Free software is important because not only is it monetarily free, but it encompasses four freedoms, which are scrawled on the whiteboard above one of the many computers lining the walls of Free I.T.: “To run the program for any purpose. To study and change the program. To redistribute exact copies. To redistribute modified versions.”

“Once you get it set up and it’s working, it’s always working. They do push out updates. They’re always free,” says Walker about open-source software like Ubuntu and Linux. Another advantage of free software is that it’s mostly virus-free. Hackers generally don’t write viruses for Linux, because companies that have data hackers want to steal don’t use it, Walker says.

As it expands into its new space, attracts more eyes and hopes to partner with more nonprofits, Free I.T. is committed to providing technology opportunities for everyone in Athens, for those who are in need of a computer to those who simply want to learn more about them. Walker believes “every nerd in Athens should be here.”