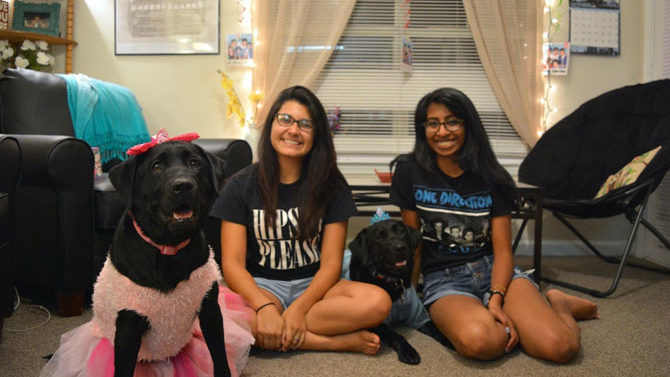 Next time you see a puppy in a little yellow vest relieving itself on the sidewalk or chilling in a restaurant, you might want to refrain from muttering under your breath something about bad dog etiquette. That pup is probably better behaved than your average 10-year-old kid.

Roughly 100 puppies in vests that boldly state “Future Guide Dog” roam the sidewalks and classrooms of UGA and elsewhere in Athens every semester. The dogs are part of a puppy-raising program through the Guide Dog Foundation, an organization that’s been around for 70 years helping to provide assistance dogs to those in need.

Gabbi Markle and Sanjana Ramesh were strangers when they drove to Deana Izzo’s kennel, Happy Tails Playhouse, on Nov. 3, 2014 to pick up their long-awaited puppies, which had just arrived after a 19-hour drive from New York. After being handed their 8-week-old pups and given the puppy-raising essentials—food bowl, leash, collar and some food—they realized they were parked next to each other, then Sanjana was in front of Gabbi all the way home to their apartment complex off College Station Road. From that night on, the two were inseparable—the sister puppies, Barbie and Elsa, demanded it. “They were obsessed with each other,” Markle says.

The Guide Dog Foundation offers several ways a volunteer can be involved. Buddies can watch a dog for a few hours a day, essentially babysitting. Campers can house dogs for multiple days in a row, helping out puppy-raisers when they need to go out of town. Co-raisers share the load of raising a puppy between two people. The most involved is being a full-time raiser. Raisers like Markle and Ramesh typically raise dogs from the time they are 8 weeks old until they are ready to head back to New York for formal training 14–18 months later.

“When you get into it, you really don’t know what you’re getting into,” Markle says. She and Ramesh reminisced about their first years with their pups, saying it was like having a baby to take care of. “We all talk like we’re moms.”

Both girls discovered the program during their freshman year, after seeing the dogs all over campus. UGA dorms don’t allow dogs, though, so they had to wait until their sophomore year to volunteer.

Raising a guide dog starts long before you hold the furry pup in your arms. A six- to seven-month process determines your eligibility. “We have an extensive application process to be a puppy-raiser,” explains Izzo, the Athens field representative for the Guide Dog Foundation. “This ensures we get raisers that have good communication, a good understanding of what they need to do to better ensure the dog they will be raising will be a guide dog and a good history of meeting attendance.”

Aside from the in-depth application process and 80-page manual (complete with quiz), before they’re qualified to raise a future guide dog, applicants have to camp adult dogs, hosting at least one overnight stay, to make sure it’s something they really want to take on.

When Markle and Ramesh found out they were getting puppies, they both wanted male golden retrievers. However, a specific breed or color isn’t guaranteed, and both were handed female black labs from the same litter. It didn’t really matter—they adored the puppies and memorialized them with tattoos and keychains bearing their ID numbers.

The breed choices are slim. The foundation currently breeds labs, golden retrievers, lab/golden crosses and standard poodles. Having a limited selection and breeding them based on temperament and medical history in their own breeding department helps to ensure that the dogs have a high rate of success, according to Izzo.

Names are out of raisers’ hands. “I’m pretty sure the sponsor family had little girls,” Markle says, “since their names are Barbie and Elsa.”

Sponsors sometimes raise, but mostly they choose where the dogs go. They also name them, and somewhere there are two guide dogs named Honda and Odyssey sponsored by the car company.

Once raisers receive their pup and supplies, the hard work begins. A guide dog has to be exposed to everything. You name it, the dog needs to know it. Buses, cars, bikes, bars, tall people, short people, large people, children, all the different human races, all the kinds of animals, phones ringing, sirens wailing, wood, metal, plastic, thunderstorms, drunk people.

It may seem strange to give your dog “experiences,” but the importance is easy to understate. A scared dog or a shy dog can’t make a good guide dog. “There are a variety of reasons a puppy may be released from our program, like fear of cars, fear of metal grates and medical [reasons], too,” Izzo says.

And as for that little puppy marking his territory on the sidewalk? Most guide dogs, according to Markle and Ramesh, go on to live in urban settings and have to be accustomed to using concrete.

It takes a village to raise a good dog. “You learn a lot from the people around you. I learned that through the prison program, because she would learn so much there,” Ramesh says.

Elsa, Ramesh’s puppy, spent 10 months in the prison program at Arrendale State Prison in Habersham County. The foundation trained women in the prison to keep dogs, and they would switch between prisoners so the dog could meet different people. Elsa spent her weekdays in the prison and lived with Ramesh on weekends. (The specific prison program that Elsa was a part of has been discontinued, according to Ramesh.)

“The support system is really important,” Markle says. Both Elsa and Barbie had litter problems. In addition to having each other, “we had monthly meetings where you got a lot of advice and help,” Ramesh says. Sometimes groups of raisers and puppies will work on training their dogs together around town or on campus.

After puppies are raised, they leave the home they’ve known for a year and a half to go back to New York. Think of it as a sort of guide-dog college.

Back at the Guide Dog Foundation, the adult dogs start their formal, months-long training. Most of the dogs go on to be guide dogs for the blind, but if a dog shows potential in another field, the foundation works with other detection schools such as the Bureau of Alcohol, Tobacco, Firearms and Explosives National Canine Division or the MSA Explosive Detection Canine Training, according to Izzo.

A person in need of a seeing-eye dog fills out an extensive application and, if approved, goes to New York for two weeks of training, with expenses paid by the foundation. “We match a person’s walking pace, strength for corrections, lifestyle and other factors to a dog that we feel will be a good match,” Izzo says of the matching process of dog to new owner.

“I know this dog,” Markle told the foundation. She fought, knowing Barbie’s potential and wanting her to succeed. “There was a lot of back and forth,” she says, “but [the decision] shouldn’t be made overnight, so I get it, but it’s hard.”

Markle struggles with Barbie’s rejection. “The feeling of her not going is worse than her leaving,” she says. “I love her with all my heart, but knowing I was going to keep her because she couldn’t be the thing we had worked for was hard. It’s not because I didn’t want her or love her, because I do, but I raised her because I wanted her to be something good.”

Ramesh agrees: “Not being able to get answers is the hardest part,” she says. Elsa is still in training, and while Ramesh gets updates and pictures, she won’t know if her dog made it through training until later in the summer.

Both friends will raise dogs for the foundation again, they say, but not right away. As Ramesh says, “you want to give them stability.”