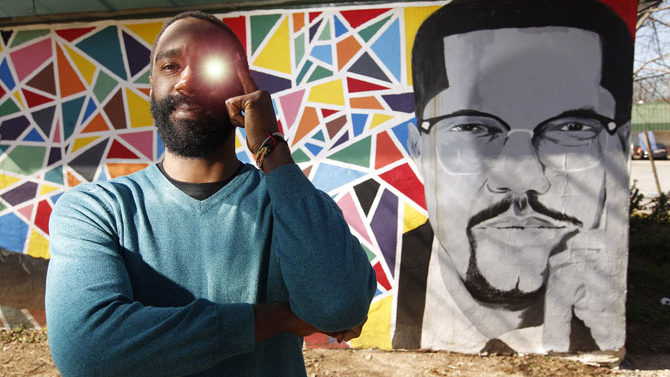 
Superpowers: Spreading love in the community and connecting with others.

“I don’t feel like I’m on the block anymore.” The feeling shared by one of Broderick Flanigan’s young mentees is one of the reasons he does what he does, alongside Lemuel “Life” LaRoche. Life started Chess and Community in 2012, and Flanigan joined the team that year when the two met at a chess tournament at Little Italy in downtown Athens.

The two socially-minded mentors are on a mission to raise up young men and women through art, chess and community in Athens. C&C is a nonprofit that teaches kids to apply the principles of chess to life, and young players who join the official chess team, The Knights, must do community service, maintain good grades, participate in summer book clubs and represent their peers at competitions.

As assistant director of C&C, Flanigan wants to give the kids an outlet to express themselves, in addition to the mind-strengthening they get through chess. “This is what community is about,” Flanigan says, “enriching kids, not selling art.”

Flanigan, who owns a portrait studio on Vine Street, was born and raised in the low-income Iron Triangle neighborhood of Athens. Having had his own mentor in the area who helped him succeed, he was inspired to come back, open up his art shop and become a mentor himself. Every day neighborhood kids hang out in his shop. On good days as many as 10 show up to do personal art projects or work on larger ones such as the MLK/Malcolm X mural at Triangle Plaza across the street from the studio, which was completed in January with donated funds.

Many of the kids who are part of C&C have been in and out of the juvenile system, and the club has had positive impacts in the lives of kids who have been members for a long time, according to parents who have reached out to Flanigan and Life.

“Either you learn chess here or you learn it in jail.” That’s what Life, whose superpower is connecting with others, tells some of his chess kids, and he uses the game to teach them important life lessons—thinking critically, understanding concepts behind the game, identifying how pieces work and how that can be applied to life. Chess is an important tool for Life, who wants to teach the kids to respond, not react, to situations.

A native of New York City, Life moved from Atlanta to Athens in 1999 and got a master’s degree in social work from UGA. He started or worked in several programs at Whit Davis Elementary School and Clarke Central High School, where he started to incorporate chess to teach kids to think critically. He realized the significance that chess could have in the lives of those he was mentoring. But Life doesn’t stop at the chessboard. C&C has many other outlets for kids, such as book clubs, entrepreneurship training and community service.

Both men know that their weakness is their tendency to spread themselves too thin, trying to help everyone, and Life adds that “some people, they take kindness for weakness.” They know they can’t help everyone, but their programs and their mentorship has made such impacts on kids’ lives that some have gone away for college, then returned to share the love and mentor in the same way Flanigan did.