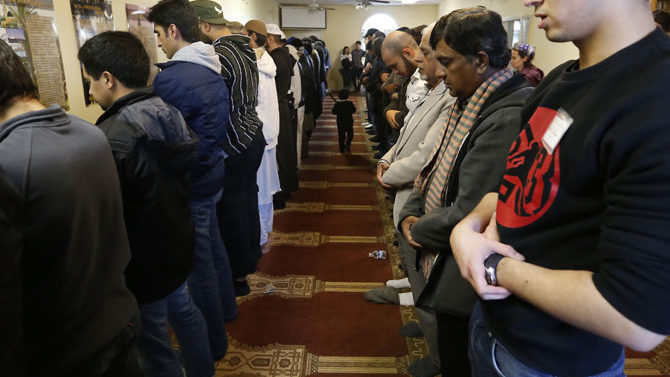 Inside the mosque children clamor between legs and abayas, Muslim women’s traditional floor-length garments. It’s the quickest way to keep up with one another in the bustling Al-Huda Islamic Center in Athens during a recent open house. The afternoon-long event was part of a larger “Get to Know Your Muslim Neighbor” initiative by mosques in Georgia.

The goal: to invite the non-Muslim community to an Islamic center where they could meet Muslims and learn more about Islam during a political and social climate which increasingly views Islam with negativity and fear.

The Association of Religion Data Archives conducted a study in 2010 and found that 762 Muslims reside in Clarke County, a number that more than doubled since their last study in 2000. Because of efforts like the open house at Al-Huda and the curiosity of the American people after 9/11, Adel Amer, the imam at Al-Huda, says the number of Muslims in America skyrocketed as people began to discover the peaceful message Islam teaches and find comfort in its practice.

“There is a disconnect between what you see in the media and in real life,” Amer says, frustrated. (Perhaps most notably, presidential candidate Donald Trump has played into fears of terrorism by calling for banning Muslims from entering the U.S.) Amer describes the mosque as an Islamic center for the American people, because the goal is to bring Muslims and non-Muslims together and try to counteract the rhetoric that has caused that disconnect.

The name Al-Huda means “the right path” or “the right guidance,” according to Talal Alothman, a member of the mosque’s welcoming committee, which gave tours and provided information during the open house Jan. 23.

The tour starts at the front door, where guests are asked to remove their shoes or put blue coverings over them. Just beyond the front entrance Mustafa Gad stands serving coffee and tea, a job he’s being doing for 27 years, since about the time he and other graduate students at UGA founded the mosque in the 1980s. Across from Gad’s drink table, an ablution room provides the necessary basins for washing before prayer.

Further down the hall is a kitchen and a female-only gathering room. The main prayer hall is just inside to the left of the front entrance, a large room with an Islamic library attached, as well as rooms for children and other instruction purposes. Devout Muslims pray five times a day, which can be done at the mosque or elsewhere, but 150–200 people come to the Friday noon prayers, the most-observed of the week.

Guests could view Islamic art, have their name written in calligraphy, read about the Quran or experience it through a multimedia program, have a henna design drawn on their hands and taste Arabic foods.

Although the open house was coordinated with many mosques as a way to peacefully push back against anti-Islamic rhetoric, Al-Huda has received much community support in the months after the San Bernadino, CA and Paris attacks. Other religious institutions and individuals in the community let the mosque know that they stood behind them, helping build a strong interfaith network with which Al-Huda partners for events and promotions.

Zeeshan Rizvi, another member of the open-house committee and a PhD student at UGA, says Al-Huda typically plans one or two open houses on its own each year. He stresses the importance of connecting with non-Muslims. “You can be in a cocoon, or the other option is to invite people out and let them meet with us,” he says.

The members of Al-Huda take community participation seriously, with events such as volleyball games on Sundays, visits to nursing homes, monthly family nights and even a Muslim running club, all of which are open to non-Muslims.

When their granddaughter learned about the open house through school, David and Gail Kurtz decided to join her in visiting the mosque. They’d never been before and didn’t know much about Islam, but enjoyed the event. Gail says “it presented people with a different face than they have been shown.”

Islam is an inclusive religion that attracts more converts from all backgrounds than any other faith in the world. Al-Huda Islamic Center has members representing more than 50 nationalities, according to Amer, including doctors who lend their services to help members of the mosque, and the welcoming committee puts together “new Muslim” baskets containing an English Quran, books on basic prayer, flyers with online resources and a book on the prophet Muhammad.

The population of Muslims in Athens-Clarke County is largely due to the university, and in 2014 that population grew, in large part because of the newly adopted Intensive English Program, which currently has 75 foreign students. Three-quarters of IEP students come from Islamic countries, according to Marina Doneda, a faculty member in Academic Enhancement and a part-time instructor and event coordinator for IEP.

IEPs are located in many cities in the U.S., some affiliated with universities and some not, though Doneda says UGA is a big draw for a lot of her students, who have to be accepted by a college in the States in order to stay here after their time in the IEP is up. There are eight levels for students in IEP, starting at the beginner level for those students who speak very little English, and activities range from language classes to Stone Mountain field trips.

“Their biggest hurdle is confronting the people who do have those prejudices against them,” Doneda says, but “if you look at the statistics of Georgia politically, we’re pretty conservative, but if you look at Athens I think it’s a lot more liberal, and I think that translates to UGA.”

She recalls the Parade of Lights in downtown Athens last December, which was about a month after the Paris attacks. “It was interesting in the parade to see people look at [Muslim students’ float] and do a double take, like their first thought was ‘Oh, that’s interesting,’ and I would say that 80 percent of them, after they realized there was a group of Muslims there, they went out of their way to smile bigger and be nicer.”

Doneda didn’t have much experience with Islam before working with IEP and starting the weekly conversation group that meets at Hendershot’s Coffee Bar, but she has enjoyed learning about it through her Muslim students. “There are a lot of similarities between Christianity and Islam that I didn’t know about before,” she says, “and every [Muslim] I come into contact with is super open to having those discussions and telling you about what they believe and listening to what you believe.”

The conversation group started in the fall 2015 semester, with a handful of IEP students meeting to practice speaking English with others in the program, as well as with other UGA students and members of the community. What started as just a few students grew into a group of 30–40 who meet every week. While the group may not be solely Muslims or Arabic-speaking students, a large majority of them are, and the off-campus meet-ups have become a way for them to become involved in the larger Athens community, which is encouraged to participate and talk with people from different backgrounds. 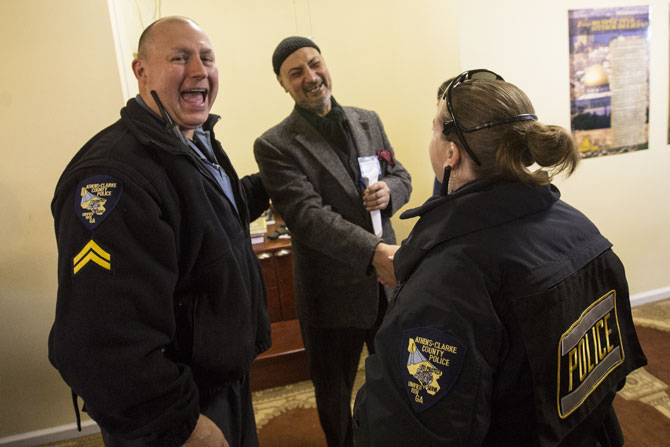 The Muslim Student Association at UGA, presided over by Huriyah Malik, a biology major, is another, more university-centric outlet for young people of the Islamic faith. “We’re [Muslims and non-Muslims] all the same. Our job is to let them know we’re all normal,” Malik says. Her goal for MSA is “to foster a community for Muslims. It’s their home away from home. That’s what it was for me.”

The group was started in the 2009–10 school year and has grown so that roughly 60 members attend their general body meetings and they average 100 at larger events. They also host “halaqas,” which happen every Thursday evening and are a way for people curious about Islam to reach out to MSA and have their questions answered.

Last semester MSA hosted game nights and socials every week, encouraging non-Muslims to join them. In the future they want to continue expanding, which will help them as they also try to partner with Al-Huda to do more service work, which Malik says is “always a priority of MSA.” One of the projects MSA is working with the mosque on is a food bank every other Wednesday.

Interconnectedness is important to MSA and Al-Huda members, with many young people members of both institutions simultaneously. Also stressed is interfaith connectivity; both the Catholic and Wesleyan student groups on campus are active supporters of MSA.

Malik echoes a sentiment that Amer and Doneda both understand and promote within their communities: “It’s a religion of peace, and it’s really important to know that.”