The Best of This Year’s UGA Game Day Blotter 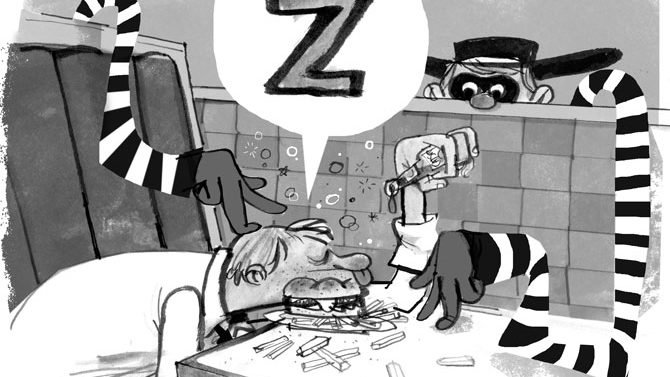 Georgia fans (and those of opposing schools) are known to have, uh, a Dawg-gone good time on football weekends. Flagpole checked the police blotter after this year’s home games to find the funniest and weirdest incidents. The following information is taken entirely from Athens-Clarke County police reports.

THAT’S A BIG BEER FUNNEL: Officers observed a man collecting items in the area of Lumpkin Street the night of the Georgia-Louisiana Monroe game, Sept. 6. When confronted, he initially advised that the items were given to him, including a cone from the UGA Catholic Center, where the man claimed to be a member. Officers spoke with the Catholic Center and found he was not a member. The man admitted he had been drinking, and that some of the items, if not all, did not belong to him. In the man’s wallet, officers located a second ID card with a different date of birth, which the man said a friend had made for him. The 19-year-old was issued citations for underage possession of alcohol and a fake ID, with the possibility that the owners of the stolen property could swear out warrants as well.

TRAINING DAY: An officer was dispatched to the Waffle House at 140 W. Clayton St. on Saturday, Sept. 20 in response to two disorderly men who allegedly tried to assault a homeless man in front of the nearby parking deck. The officer observed the two men notice him enter, and they began to run up the parking deck stairway. The the officer yelled at them to stop and come back down; however, the two disregarded the officer’s commands and continued up the stairwell.

Additional units arrived and secured the exits to the parking deck. Two officers began a floor-to-floor search and located the two men on the fifth floor after 10 minutes. They claimed they had not heard the officer’s commands. The men—a 20- and 21-year-old from Athens—were arrested on charges of obstruction for leaving the scene of an alleged crime and ignoring the officer’s verbal commands.

While searching the 21-year-old, an officer found four Xanax in his right pocket, and he was charged with possession of a Schedule IX substance. The man became hostile towards the officer. During transport, the man made the statement that if the officer didn’t have a uniform and badge, and if he wasn’t handcuffed at the time, he would show the officer what his military training could do.

BOMBS AWAY: An officer on patrol Saturday, Sept. 19 at 1:20 a.m. on East Clayton Street noticed two people in a second-floor apartment above the Cabin Room Bar leaning out of the window and pouring liquid out of beer cans onto the crowd below. The officer flashed his flashlight on the subjects, and they went inside the apartment. The two men—a 23-year-old and a 20-year-old, both of Athens—appeared in another window, and the officer observed the 23-year-old spit out of the window onto the crowd below. The management of the apartment complex was summoned to the scene, and the men were warned that activity of this nature would not be tolerated.

THEY DRINK ‘SHINE IN JERSEY?: At 12:36 a.m. Sunday, Oct. 4, an officer observed a man on the East Clayton Street sidewalk remove a jar of moonshine from his pocket. As the man was drinking from the jar, the officer asked for his information. The man gave the officer a fake New Jersey license. The 20-year-old Suwanee man was arrested and charged with possession of a fake ID, underage consumption and open container.

THE REAL TAILGATE: An officer was investigating a battery in the area of Farmer’s Exchange apartments around 2 a.m. Sunday, Oct. 4 when the officer was approached by a man asking “where the real tailgate was.” The officer responded “everywhere,” and could tell the man was under some type of intoxicant that was not alcohol.

After the encounter, the man went back to his vehicle, where the officer could see another person inside. The officer believed the man was trying to distract him from a crime that was about to occur or was already occurring.

The officer patrolled the parking lot looking for broken car windows and any evidence of crime, and he noticed the man’s vehicle was from out of town because of all the Alabama flags on the vehicle. The two men in the car appeared to be just hanging out with no intent of visiting someone at the complex.

The officer went to the driver’s window and spoke to the man, who again asked “where the real tailgate was.” The officer could smell marijuana coming from the vehicle. The officer asked to search the vehicle and the man, now in handcuffs, said “yeah.” A search of the vehicle revealed a blunt, a jar of marijuana and a bottle of MDMA pills.

The 36-year-old Ellenwood man then told the officer that his brother, 35, of Norcross, had nothing to do with the drugs in the car and claimed them.

DUDE, WHERE’S YOUR SORORITY?: An officer responded to the Cook Out on Waddell Street at 2:57 a.m. Friday, Oct. 16 after the manager called in reference to a driver who had fallen asleep in the drive-through for 30 minutes. The truck left before officers arrived and was found on Dearing Extension in gear with the engine running and lights on. The driver, a 19-year-old Athens man, told officers he had been drinking and was under the impression that he was in the parking lot of a sorority. He was arrested and charged with DUI.

THE HAMBURGLAR STRIKES AGAIN: An employee of The Grill flagged down an officer at 12:48 a.m. Sunday, Nov. 8 because a couple had walked out without paying their bill. The employee told the officer they had ordered food, but were kicked out of the restaurant for eating French fries off a plate belonging to another customer who was passed out. According to the couple, the passed-out customer didn’t seem to mind the fries being eaten when he woke up.