Who’s Driving the Bus? A UGA Student, That’s Who 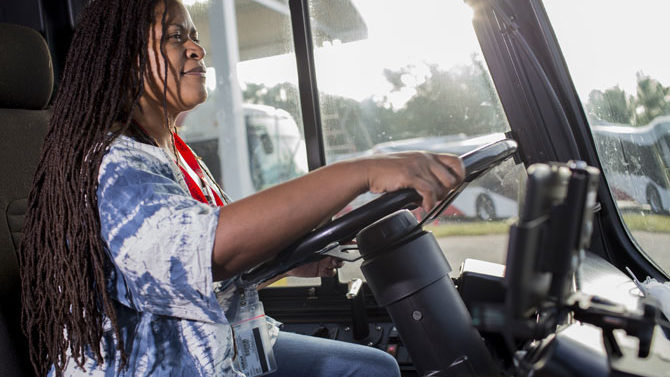 Driving buses for the UGA transit system is one of the highest paying jobs on campus, but the road to becoming a full-fledged bus driver involves commitment and a rigorous training process.

“The attraction of the work is an individual thing, but some of the perks are a fairly high rate of pay, schedule flexibility to work around classes, responsibility and relative independence, compared to many other jobs,” Hamlin says. “With longevity in the job and good performance, students can advance in responsibility as a student supervisor or trainer, along with other opportunities.”

The high pay was what initially caught the eye of UGA transfer student Nicole Ambush. “They said it was the highest paying job [on campus.] Coming from a full-time job to a part-time job, I needed to maximize money and hours,” Ambush says.

Ambush also was impressed by the job’s flexibility surrounding class schedules. “You submit your schedule, and then they try to fit [the hours] around your schedule,” she says.

Despite the high number of student drivers, becoming a driver is no small task. UGA Transit’s training program, which includes obtaining a Class B driver’s license, averages 150 hours. “For a student, this is about a semester. It involves several different levels, from lab training and basic instruction on bus operation, to preparation for the commercial driver’s license, to learning the routes under the guidance of a driver-trainer, then operating the bus in live service still under guidance,” Hamlin says.

The road to becoming a UGA bus driver begins in the office of Dave Tollett, who is in charge of recruiting and training drivers. The basic requirements are a clean driving record and being at least 19 years old. Beyond that, before applicants can be considered for the job, they must pass a drug test and obtain a Class B permit.

“The permit test is quite difficult. If you have any memory of your driver’s permit test, that one wasn’t too bad, [but] this one is a tradeskill-oriented kind of test. It’s kind of like learning a whole new language in about a week, so I explain to them that they need to put every bit of effort into it as if it were a midterm or a final exam,” Tollett says. “To be truthful, 25 percent of the people who come in to visit me will pass that test the first time. It’s a horrible pass rate.”

According to Tollett, the permit test’s difficulty ensures that prospective drivers are of a high caliber. “I think once we get all of our hires in we get some of the best, most accomplished people out there,” he says.

After applicants obtain their permit, they begin their paid training. Initially, trainees spend most of their time learning the basics in a classroom, but by the second full week of training, most trainees are driving on the roads.

“By the time they’re finished with this phase of training, they’ll have every bump and crack in the pavement learned, pretty much. So every turn is mastered, every stop name memorized,” Tollett says.

Most of the training for new drivers is overseen by trainers hired by Tollett from the pool of current UGA bus drivers. There are several full-time trainers, but UGA students can also apply for those positions.

“What I want from my trainers, ultimately, is someone who’s going to be welcoming, supportive, encouraging—all throughout the process,” Tollett says.

Ambush’s experience with the trainers has been positive. “Excellent training,” she says. “Everybody that I’ve worked with has been super polite and followed a very strict regimen. The driver-trainers are very professional. Some are younger than me, actually, but they’re so professional and very skilled.”

Ambush believes that, regardless of the training, the transition from driving a car to a bus can be difficult. “It’s three times longer than your car. You have to maintain curb distance, watch your lanes, and it’s wider than a car as well. To me, it’s been a learning experience,” she says.

For Ambush, the learning experience has carried over into how she drives her regular car.

At the end of the day, Tollett believes that the key requirement for drivers is motivation.