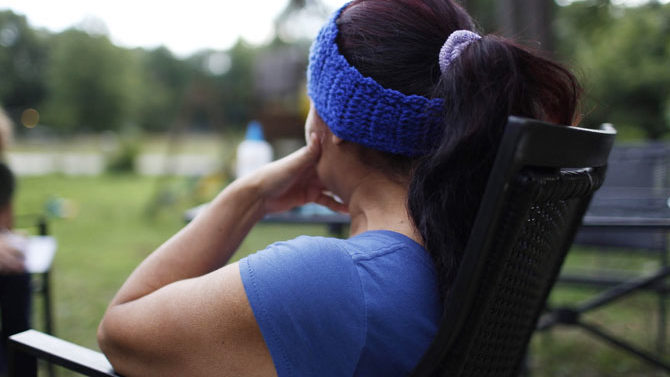 Victoria won’t tell her grandchildren that the man they consider a grandfather is in a detention center in South Georgia. She’ll wait until he’s deported back to Mexico to tell them that immigration agents took him away in early May. She doesn’t want them to picture him in jail, even if it means she has to continue stalling whenever they ask why he’s not there to take them fishing or push them on the swings in the front yard.

“They have only seen good things from their grandfather,” she says through a translator, recalling trips to the beach and other family memories. “I don’t want them to think of him as a bad guy.” (Victoria agreed to be interviewed on the condition that Flagpole use pseudonyms for her and her husband; however, their real names were used to verify her story.)

Her husband calls her from a detention center in Ocilla every day, and they talk about what’s going on at home in Athens. They are drawing out the time and pursuing all his options to stay in Athens, where he has lived and worked the past 22 years. Some days, she admits, she just wants it to be over, even though once he’s deported, Victoria may never see her husband again.

Immigration and Customs Enforcement Agents swept through Athens beginning Mar. 1 as part of Operation Cross Check, an enforcement action targeting undocumented immigrants who have been convicted of crimes sometime in the past. ICE’s Enforcement and Removal Operations arrested 2,059 people in a four-day, nationwide raid that “focused on the arrests of public safety threats,” the agency said in a news release.

ICE also said that more than 1,000 of the detainees had been convicted of felonies in the past—meaning more than 1,000 had lesser charges like DUI or misdemeanors related to domestic violence on their record. Victoria’s husband was convicted of DUI in his early 20s and criminal trespass, disorderly conduct and interfering with a 911 call in Clarke County in 2008. In the second case, the judge fined him $200 and required family counseling; probation was suspended once he completed those requirements, according to court records.

Most of the local families affected by the detentions say the same thing: The man of the house committed a misdemeanor sometime in the past, but losing his presence as a breadwinner, husband and father is devastating.

ICE insists that some of the immigrants picked up in early March are really bad guys. Of more than 2,000, 58 are known gang members or affiliates, 89 are convicted sex offenders and 476 had illegally re-entered the U.S. at some point, the agency says.

Matt Hicks, who teaches language and literature at Cedar Shoals High School, saw two students’ very different reactions as they lost parents to deportation this spring. A girl despaired about her family and her future. A boy who also lost his father took it differently. “He was so very angry and went through the normal stages of loss,” Hicks says. “Ultimately, he decided that he now was the man of the house and needed to get a job. His education, which was so important before, was less important than that.”

Since August 2012, undocumented students have been able to apply for DACA (Deferred Action for Childhood Arrivals), a temporary reprieve that allows them to live and work without fear they will be deported. President Obama signed a similar exemption for parents, but it is held up in the courts.

When children of undocumented parents hear about another family split by deportation, they naturally worry about their own, Hicks says. If Dad is 10 minutes later than usual getting home from work, they fear the worst.

A few years ago, the father of one of his students was detained just before graduation, Hicks says. Not only did the father miss his youngest son’s ceremony, the immigration system transferred him several times from one detention center to another. For a couple of days at a time, the son didn’t know whether his father was behind bars in the U.S., released to come home to Athens or deported back to Mexico. “He should have been thinking about his own graduation, but all he could do was worry. It was wrenching,” Hicks says.

Locals who advocate for immigrants believe that 14 people in Athens were detained in the first few days of March as a part of the Cross Check operation. That doesn’t include anyone detained before or after. Different support networks are doing what they can to help the families that have lost their source of income, many of them families with children.

One of those groups, Athens Immigrant Rights Coalition, formed in 2011 in response to House Bill 87, the Illegal Immigration Reform and Enforcement Act that requires employers to check immigration status. This spring, the group started to pair volunteers with immigrant families to help advocate and lend support after a relative was detained or deported. “These are previously stable families with kids,” says one of the coalition members, Richard Milligan. “There are lots of people who aren’t gang members who are getting deported.

“The way (immigration officials) concentrated it all at once, it has left lots of families in crisis,” he says.

The group set up a GoFundMe campaign and raised a few thousand dollars to distribute to families that need rent. With school-age children, many of the women don’t seem willing to leave Athens unless they have to, Milligan says.

Immigration courts across the country dealt with 306,405 cases in 2014, up from 277,277 the year before, according to the U.S. Department of Justice’s annual report from the Executive Office of Immigration Review.  “[Immigration officials] seem to have really gone on the war path lately,” says Athens immigration attorney Blair Dorminey. “The Obama Administration probably has deported more undocumented aliens than previous administrations.” Advocates for immigrants point out that Obama has pushed through DACA and the related DAPA for parents, but those aren’t permanent solutions.

When an undocumented immigrant is detained, there are some arguments he can make to stay—but they are tough standards to meet. For example, a person might be allowed to stay in this country if he can show good character, 10 years of residence in the U.S., no convictions and that deporting him would cause extreme hardship to an American citizen.

Because they can’t meet those criteria or don’t want to burden family, most detainees sign a form agreeing not to fight deportation. Of the 136,000 cases immigration judges decided last year, 72 percent of people were removed from the United States. Slightly fewer than 15 percent were allowed to stay in the country. (In the rest, the charges were unfounded or the defendant had already begun the naturalization process.)

“The immigration courts in Georgia are some of the toughest,” Dorminey says. Most detainees are either sent to the Irwin County Detention Center in Ocilla or the Stewart Detention Center in Lumpkin. Stewart County also has an immigration court, which completed 4,471 cases in 2014, more than any court other than ones in Dallas, Houston and Miami. Of those cases, only 9 percent of the detained immigrants appealed to stay in the U.S.—the lowest rate in the country (tied with Oakdale Federal Detention Center in Louisiana). Across the country, detention centers have an average of 38 percent apply for relief to stay here.

Critics say the system unnecessarily separates families in a traumatic way, but they are particularly critical of the private detention center in Stewart County, which Hicks calls “a money-making machine.” A faith-based group runs a hospitality home across the street from the detention center, El Refugio, to give relatives a place to stay and prepare to visit.

When agents swept through Athens in March, they didn’t take Victoria’s husband, Luis. (The couple has been together for six years and considers themselves married, but they do not have a marriage license.) Luis left home before dawn, and immigration agents stopped his truck as he and several Hispanic passengers exited the Athens Perimeter onto Chase Street. The truck was legally registered and in good operating condition, Victoria says, and Luis isn’t accused of a traffic violation. She feels like he was targeted, she says.

People sometimes ask if local police look for Hispanic drivers or assist in immigration enforcement, says Athens-Clarke Police Lt. Christopher Nichols, but that’s not the case. “We are not concerned with a person’s legal status,” says Nichols. “Either you were the victim of a crime or you weren’t. Either you committed a crime or you didn’t. Those are the questions that concern local police.”

Local police did not assist with the immigration operation, he says, and don’t use profiling to look for unlicensed drivers. “If you were to do that, you would be in a lot of trouble,” Nichols says. “Unless you personally know someone, you can’t look at them and tell they don’t have a license. If you are doing a traffic stop, it better be based on the fact that you have reason to believe a crime was committed.”

But immigration agents can set up checkpoints, Dorminey says. He’s been through one himself.

Victoria didn’t think Luis would get stopped, especially after agents swept through in March. Life went on after the March raids, and Victoria did what she could to help her friends who weren’t as fortunate.

One of those families was a young mother with two children who didn’t know how she would pay rent, let alone buy clothes for one daughter’s upcoming first communion. Though it wouldn’t solve their larger problem, Luis took the wife and children shopping to buy the girl a dress and shoes. He took them all out to eat afterward, and both families were looking forward to the service on May 16. Luis was stopped by ICE agents on his way to work on May 7.

“The service was so sad,” Victoria says through an interpreter. “This little girl had already lost her father. Then she lost the man who had become like her godfather. How is it possible to lose both your father and godfather at the same time?

“I don’t know why things happen, but it’s almost a circle,” Victoria says. In the detention center, Victoria’s husband met up with the girl’s father before he was deported to Guatemala. Now, his wife has given up her apartment and is renting a couple of rooms in another home.

Most of the broken families will do the same.