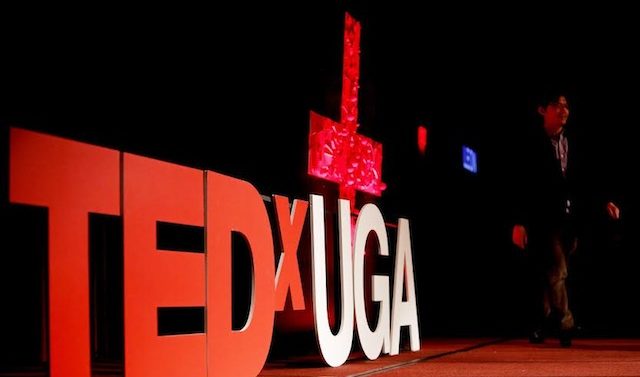 Fifteen students, alumni and faculty presented “ideas worth spreading” Friday afternoon at TEDxUGA, an event that sold out in less than an hour.

“At UGA we are not satisfied with the world the way it is,” said Scott Shamp, director of the New Media Institute and the announcer at the event. “We want to help the world grow,” Shamp said to the 480 attendees, the highest attendance so far of the yearly event.

Local band Dangfly, which has appeared on an AthFest compilation album, performed several songs during breaks between speakers.

Presenters shared ideas at TEDxUGA from protecting butterflies, technological literacy and using the popular game Jenga to predict the spread of disease.

• Lisa Taylor, an UGA alumna who is now a civil rights attorney at the Department of Justice, revisited her years as a junior officer in the military during her speech, telling the story of her successfully convincing leadership to remove all pornography from the ship she was stationed on. Even as a junior officer, Taylor was still a leader, she said. “We all have it in us to be leaders, whether we know it or not,” she said.

• Han Park, a UGA faculty member and internationally recognized expert on North Korea, explained his lifelong fascination with peace, focusing on the several parts necessary to achieve it. “Peace is not the absence of conflict,” Han said, but rather a combination of communication, harmony and diversity, made possible by strong education.

• Stephanie Jones, a PhD student at UGA, said that children should be allowed to read the books they want and that can relate to their real life, rather than trying to make traditional English class books their real life. These books can change students’ lives, Jones said, and shouldn’t be avoided because a teacher is intimidated by the conversations they may provoke.

• Sonia Altizer, an ecology professor at UGA, explained her concern for the future of Monarch butterflies, saying their population has declined by 90 percent, mirroring the increased use of genetically modified crops that can be sprayed with pesticides several times, killing the weeds that butterflies grow in. But that’s not the only cause of Monarch’s endangerment, Altizer said it is “a tragedy of many causes” including deforestation, car strikes, disease, climate change and drought.

• Julie Rushmore, a UGA alumna, used her experience studying chimps in Uganda to illustrate the importance of “one health”, a theory that says humans’ health is connected with the environment and animals. The spread of disease could be viewed as social network, and this has led to needing 35 percent fewer vaccinations to stop the spread of disease.

• Chris Dixon, a UGA alumnus, told the story of how a single article assignment covering a place in the ocean that is home to many drownings and ship wreaks led to him authoring an entire book. Dixon was intrigued by people’s stories of why they still visit the dangerous bank and said understanding people and gaining their trust is crucial to telling stories.

• NCAA March Madness brackets are not just fun, they are economics, Myriam Quispe-Agnoli, a UGA faculty member, said. So are romantic partner decisions, she said, and even human behavior and happiness is analyzed using economics. Economics is not only for economists, but for everyone and can be used to answer important questions.

• The son of NASA employee, student Connor Lewis, defended the organization’s importance inspiring people, saying it used to be “the crucible for dreams and dreamers,” but its lack of funding is undermining its ability to inspire and discover. Space gives people a sense of wonder and hope, and NASA needs to receive the funding necessary to discover what truly lies in space.

• Jenga is not just a game, but a way to make important advancements for public health, John Drake, a UGA professor said, as a played a round of the game with his young daughter during a discussion. Like Jenga’s two conditions, a stable tower or a pile of blocks, illnesses also have two conditions—outbreak and an epidemic. Finding the switching point between an outbreak and epidemic of an illness was discovered using the game, and this discovery can help proactively stop illnesses and forecast their spread.

• Technological literacy is not only important for programmers and web designers, student Michael Bottone said, it is important for everyone and can help them “understand their life.” The majority of people now own smart phones and use the Internet, and understanding technology can help them make important decisions, fix their own equipment and not be one of the people who contributed to the almost $800 million in Internet scams last year.

• Plans are good, but not always as good as “living by your vision,” alumna Michelle Blue said. After achieving her goal of getting an internship at a corporation her freshman year, Blue realized that wasn’t the best path for her and founded a clothing company to support young women. Blue said your vision is not always about what you want, but about helping others.

• Dawn Bennett-Alexander, a UGA faculty member, said that no matter your views on race or sexual orientation, tolerance and acceptance is important to avoiding conflicts and lawsuits in the workplace. Bennett-Alexander said people may not even realize they are discriminating and that throughout people’s lives different factors contribute to their views of people. Finding the source of people’s views is important for avoiding conflict, however.

• We must remember to use our words to include and accept others, student Emily Hiers said, telling the story of her young sister being diagnosed with a rare genetic disorder. After hearing people insult her sister, Hiers realized the importance of not isolating a community and told the audience to imagine that their flaw was a universal joke to understand how often-ridiculed minorities feel.