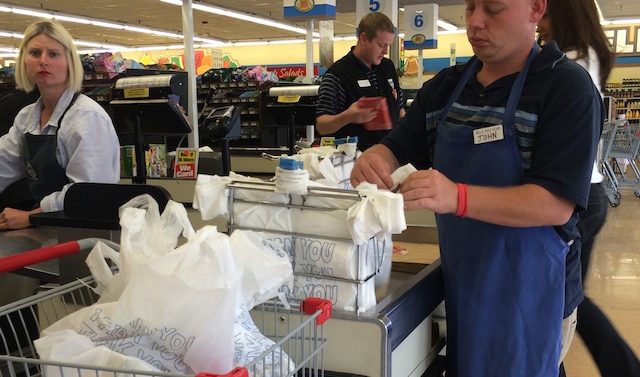 It’s no secret that plastic bags are, well, terrible. They’re made from nonrenewable petroleum; they’re non-biodegradable, and they take up valuable space in landfills. They kill sea turtles, clog drains and fly off garbage trucks to settle in tree canopies and water sources for eternity.

In fact, the little buggers are so sinister that Bangladesh banned them in 2002 after they were the main drain-clogging culprit in its massive 1988 and 1998 floods. Italy, Rwanda, Hong Kong and Mexico City all have similar bans, and so do a myriad of American cities, including Chicago, Portland, OR, Seattle and Boulder, CO. In fact, in September, California passed the first statewide ban in the U.S.

But while effective, bans are difficult to implement. So, concerned citizens are discussing something a little more feasible for Athens: a legally mandated plastic bag fee. Basically, grocery shoppers would pay a few cents for each disposable plastic bag they used at checkout. The idea is to encourage patrons to bring their own reusable bags and thus reduce film plastic waste on the part of shoppers and retailers.

“Those bags cost the retail establishment money to supply them to customers,” says Athens-Clarke County Commissioner Jared Bailey. “So if there’s a way to limit their use, it would be good for the environment but also would save money for these retailers and also save oil. We could be utilizing that oil for another purpose, or just using less oil in the United States.”

The retailers themselves may not even mind folks using fewer plastic bags; it’s not like they’re making money from them now. In fact, says Bell’s Food Store general manager Jenny Smith, the customers would probably care more than the grocery stores. A lot of them already use reusable bags, though.

Decreasing plastic waste “would definitely be a good thing,” Smith says. “I think that it would also create a lot of complaints from customers, but I think they would eventually get accustomed to it. I think the only thing with our customers would be when we get $500, $600 grocery orders that take two or three buggies—that would be a lot of reusable grocery bags. So I’m sure that they won’t be too happy about it.”

Earth Fare, says store manager Philip McWhirter, only offers paper bags and reused boxes to its patrons, and has never heard a complaint about its lack of petroleum-based crinkle. In fact, he says, “A large percentage [of shoppers] bring their own bags, because our customers and our employees are dedicated to saving the environment.”

This isn’t the first time a bag fee has been proposed; various commissioners have been bringing it up for years. In 2009, a solid waste task force led by commissioners Doug Lowry and Kelly Girtz suggested a fee of 10 cents, with three cents going to the retailer and seven to county waste-reduction projects. But logistical challenges meant that nothing came to fruition. The city would have to decide how many bags to include in the ordinance. Most proponents are willing to limit the fee to just grocery bags, but there is also the question of film plastics found at dry cleaners and the mall.

If Athens passes an ordinance, it will be the first county in Georgia to do so. But while some foresee a simple-to-implement fee, there is uncertainty about how it would be treated under state law.

“It’s obviously a tax,” Lowry says. “We can’t just put taxes on things anytime we like. That all has to be approved by the state. So I don’t know where that’s gonna really end up.”

Another consideration is how a bag fee might affect Athens-Clarke County’s relations with businesses in Oconee County. “Some of the logistical challenges are trying to figure out the degree to which we would need to coordinate with surrounding counties,” Girtz says.

And no one wants the measure to be onerous for financially disadvantaged Athenians—the reason Mayor Nancy Denson gave when she objected to Tim Denson’s idea for a bag fee during the May mayoral race. An exception could be provided for EBT (food stamp) recipients or the WIC nutrition program for mothers and babies, but that might not be the most realistic solution. “We might consider waiving the fee for them, but that would be quite an administrative burden for everybody,” Commissioner Jerry NeSmith says.

Girtz says it might be easiest for the government to supply reusable bags ahead of time, preparing everyone for the change. He suggests using schools as a conduit for waste-reduction education and bag distribution. “Getting lots of bags into the hands of people in advance is going to be critical,” he says.

But if the fee proposal didn’t work out in 2009, what’s different this time around? For starters, there’s more community support. In fact, an entire organization now exists to combat bag-shaped plastic waste. Bag the Bag UGA has been fighting this fight since 2012, installing bag recycling bins on campus, offering educational programming, hosting community cleanups and advocating for legislative change.

Bag the Bag members attended the Oct. 8 Mayor and Commission meeting to present their ideas on plastic bag waste reduction, and legislative head Landon Bubb says their presence will continue in the coming months. The group spent time in work session meetings last semester and says it hopes to finally see some action in the spring, once the commission has reset.

“We’re going to keep going, at least have one or two people speak at each meeting and encourage the commissioners,” Bubb says. “We’re really pushing toward collecting petition signatures and business support by January.”

Bag the Bag has based its legislation proposals on the fee passed in Washington, D.C. in 2010. The capital city charges five cents per bag, with a portion going to the business and the rest to community projects. “The first six months saw a 60 percent reduction of plastic bag use,” Bubb says. “So even five cents, people just start bringing the reusable bags.”

“I know that there’s a much more extended timeline on some of these activities than I’d prefer to see,” Girtz says. “I’m certainly a proponent of having a clear timeline with a strong education in bag reuse or a reusable bag distribution program prior to implementation of the fee. So I could imagine something like a year in which we make an enormous push, get bags into the hands of everybody possible and then implement the fee.”

But some are confident that in the face of mounting pollution, greater social awareness and increased community pressure, something’s got to give. “I don’t believe it’s a question of whether local governments should put measures in place to discourage use of plastic bags, but a question of when they will do so,” NeSmith says. “And it’ll be interesting to see if Athens has the courage to be the first.”

For now, ecologically minded shoppers can reduce their waste by recycling film plastic in the proper places (the designated bins at your chosen grocer), and by shopping with their own reusable bags. Sturdy options are available for a buck or two in the checkout line, and ACC Recycling gives them away for free.

It’s not that the bags aren’t recyclable; they’re just difficult to recycle. Disposable grocery bags are made of film plastic, which forms everything from Ziploc bags to toilet paper packaging and isn’t processable in ordinary recycling facilities. So, although these bags can be recycled if you put them in the right bins, they cause a lot of trouble when well-intentioned people toss them into the wrong ones.

“They’re made to stretch,” says Suki Janssen, waste reduction administrator for the ACC Solid Waste Department. “They can wrap around conveyor belts and screens. They probably cost less than a penny to make, and they can break a piece of equipment that costs thousands of dollars to fix.”

In addition, the company that buys bags from the recycling facility is more particular about the crinkly carriers than a typical plastics-buyer. “They want really clean film plastic,” Janssen says. “In order for us to sell bags, they have to be pretty pristine, they have to come in separately, and they have to be free of water, food and other debris. So we do recycle bags, but unfortunately, it’s not as convenient as recycling other materials.”

Bag issues aside, Athens recycles a lot. Since switching to single-stream recycling in 2011—the reason people no longer have to separate plastics, metal and glass from paper—the volume has already surpassed the commission’s goals for 40-percent waste diversion by 2015, with only a 6–8 percent contamination rate at the recycling facility.

Future goals include a 75 percent waste-diversion rate, county-wide composting initiatives and construction waste cleanup. But right now, Janssen says, we need to do a better job of recycling the right way. That means no food, no soggy cardboard—and no bags.

“A lot of the work revolves around getting organics out of the waste stream and getting people to recycle better,” Janssen says. “People are doing overall a great job of recycling in Athens, but they tend to do things like put things that are incorrect—like bags—into the recycling stream, which only hurts us and not helps us.”