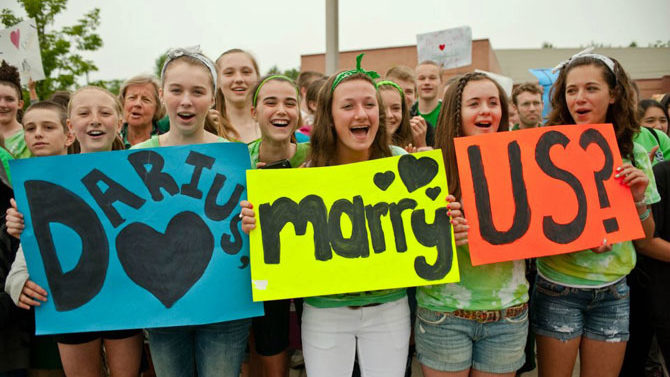 Ten years ago, a group of good ol’ Athens boys set out west in a long-shot effort to have a friend’s wheelchair overhauled by the once popular MTV show “Pimp My Ride.” Sadly, it didn’t happen. However, the teenagers started a fundraiser to support their trip and, wisely assuming that people would not be enthusiastic about funding a simple cross-country joy ride, decided to document the whole trip—despite the fact that none of them had any experience with film.

That wheelchair belonged to Darius Weems. Twenty-eight film festival awards later, the movie Darius Goes West has inspired thousands of viewers and raised awareness about Duchenne Muscular Dystrophy, which Darius suffers from and which killed his older brother, Mario. Darius had never left home before, and he perhaps didn’t have much longer to live, making the film especially poignant.

Nowadays, Barbara Smalley—the mother of Logan Smalley, the documentary’s director, who met Weems while a counselor at a camp for children with disabilities—is responsible for coordinating the anniversary’s events and Darius’ appearances. Back then, though, Barbara had her doubts the movie would even be finished, as she describes how Logan taught himself the editing program Final Cut Pro and suffered through several computer crashes (all while he was also still a student). He did finish it, and it debuted in 2007 at the Morton Theater to a packed house.

“I think people thought it would be a cute movie made by hometown boys, and they were blown away by the story,” she says. “At the end of the day, what connects people to the story is that it’s a story of friendship.”

In the 10 years since the debut, Darius and the crew have been busy raising over $1 million for research. (Think about that the next time you donate to a Kickstarter.) Darius visits schools across the country to talk to kids about following their dreams and to teach them how to “live like they’re living.” He’s also broken into the music world, having put out a rap album, which he often samples during his appearances and Skype sessions.

Occasionally, Darius, now 24, has the chance to meet other kids with DMD and, according to Smalley, his demeanor totally changes around them. “He’s so kind to them,” she says. “But he never treats them with pity, of course. It’s like a secret language… Darius Goes West has always been about ‘Let’s live life to the fullest, and let’s have some fun.’” Also, around Darius’s 20th birthday, MTV publicly apologized on CNN, donated $10,000 to DMD research and showed the film on two of its channels.

Since former Athens-Clarke County Mayor Heidi Davison officially declared July 22 Darius Goes West Day in 2004, the anniversary of the original trip has been celebrated here in Athens. This year, though, the crew has gone all out in planning a truly memorable celebration, one which includes something for everyone.

There’s a Texas hold-em tournament called “Dealing for Darius/Casino with a Cure” at 7 p.m. Thursday, July 24 at The Rail. The $20 donation gets you a stack of chips that you’ll probably lose in the first 10 minutes, so why not go ahead and plan to play twice?

The always well attended Family Carnival will take place from 6:30–8 p.m. on Friday, July 25 in the parking lot of The Body Shop and includes camel rides, caricatures, games, a DJ and barbecue. A $5 donation gets you 20 tickets which can be used on anything at the carnival except food.

The “DGW Second Annual ‘Run, Stroll, and Roll’ 5k”starts at 7:30 a.m. Saturday, July 26 at Sandy Creek Park and allows participants to go through the race in a wheelchair. The price is $30 to register, and if you win, you’ll be taking home a unique work of art by Tina McCullough.

The final event of the week, “A Decade of DGW + Dinner with Darius & Crew,” includes dinner (provided by Harry’s BBQ) and a movie, both on Saturday, July 26 at Ciné, startng at 6 p.m. If you haven’t seen the film (tsk, tsk), this is a great opportunity to do so and hang out with Darius and the crew afterwards for $20.

You could participate in all these events for less than $100, or you could attend just one. Either way, your donation will benefit Duchenne Muscular Dystrophy Research and continue to bolster the awareness that small group of boys, especially Darius, inspired 10 years ago.