Dreaming of a Train Through Campus

This is the sixth installment in a series of articles by University of Georgia College of Environment and Design professor Jack Crowley. In this series, Crowley explains the downtown Athens master plan effort that his team generated to guide development downtown.

My previous column noted  that only a very short segment of the Downtown Master Plan’s recommended local light rail system runs through downtown. The remainder transects the developed length of the UGA campus from north to south. Along with a well developed commuter bicycle corridor system, the 3.8-mile light rail project will have a profound positive effect on downtown for the next 20 years. The impact will result directly from those projects themselves and from the developments they will attract.

Remember, it’s a very dense square mile of campus with more than 40,000 residents during the day. Students, staff and faculty are already using transit to the tune of 10 million boardings a year. In addition, the campus has a very high concentration of significant visitor and academic destinations, many of which are located close to the existing rail alignment.

It will obviously require the university’s participation, and it will involve the development of a corridor that neither UGA nor Athens-Clarke County owns. This complex issue has been under study for more than 18 years, and its feasibility is in fact high. In addition to the many who access downtown by car, substantial new numbers will gain access by bicycle and rail. Another new population (students) is choosing to live downtown, greatly lessening transportation needs altogether. None of these new student housing developments will add to the existing strains on streets and parking.

This column will introduce you to this idea by taking you along as a visitor to Athens on a morning ride on the proposed light rail system. It’s fairly easy to imagine a student traveling to and from the campus for classes, living, working and recreation. 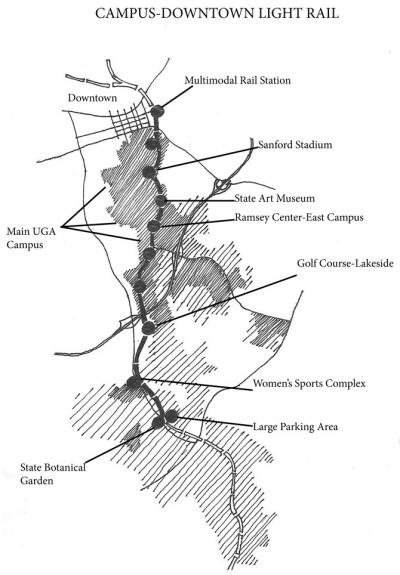 Our visitor—in Athens with a partner who is attending a conference at the Classic Center—finishes her breakfast at the Hilton Garden Inn. She crosses Thomas Street and walks across the Classic Center parking bridge and garage to the elevator tower, which takes her down to the rail platform adjacent to the Multimodal Center.

She boards a train. Traveling southward, she passes through the first station at Mitchell Street, where students going to North Campus get off. The second stop at the south end of the Baldwin Street bridge sees students getting off to go to classes in psychology and journalism. Our visitor gets off at the Sanford Stadium stop, crosses a plaza that spans East Campus Road and walks through Reed Plaza to the Tate Center bookstore, where she buys a frame for her law school diploma.

Returning to the train with a few additional UGA trinkets, she travels past the Cedar Street stop, where employees of the Central Plant, agriculture students and a couple of fraternity brothers exit. At the next stop, she gets off again with students in education and social work and buys tickets to the Atlanta Symphony’s performance that evening at Hodgson Hall.

She crosses the quad to view a new sculpture exhibit at the Georgia Museum of Art. She then elects to walk across Carlton to the next rail stop at the Ramsey Center, where students are exiting in large numbers to return to one of the 2,000 beds on East Campus, work out at the Ramsey Center, get an early lunch at the dining hall or get their shots at the Health Center before studying abroad.

On the train again, our visitor witnesses a couple getting off to return to their apartment and others going to the intramural field. The next stop is family housing, followed by a busy stop serving hundreds of private apartments at Lakeside, as well as a couple of guys with golf bags. At the women’s sports complex, most of the crowded rail car gets off on their way to an SEC softball game. At the final stop at the State Botanical Gardens, she gets off with some university staff heading to their cars in the inexpensive surface parking area. She phones from the station shelter for the golf cart shuttle to the botanical garden, where she will visit and have lunch.

The train crosses over to the northbound track to return to the downtown station. Our visitor and her partner will return by train that evening for the symphony performance after dinner downtown.