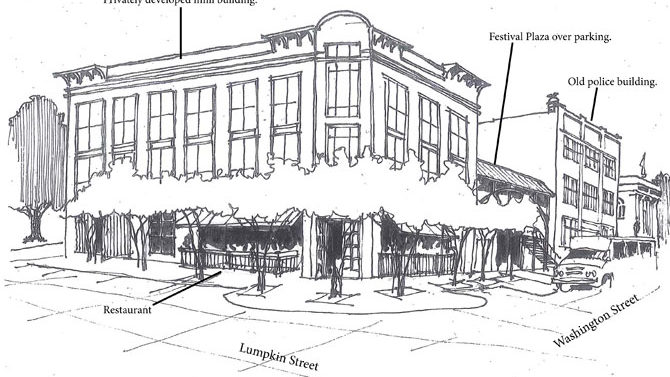 This is the ninth installment in a series of articles by University of Georgia College of Environment and Design professor Jack Crowley. In this series, Crowley explains the downtown Athens master plan that his team has generated to guide development downtown.

Athens’ already vibrant downtown is complex. Thousands gave us input on their visions to make it even better, and the plan has a large number of suggested ideas and projects.

Hopefully these visions for improvement will get adopted, but complex plans for a complex downtown can find themselves stored on dusty shelves. The goal is to keep these ideas in front of the many who are in positions to implement them on behalf of the public or private sectors, or both in partnership. All of the aspirations of the 2030 master plan won’t get done. Some will change, but each one that is completed will bring us an increment of added downtown quality.

One of the implementation methods I developed for the Downtown Tulsa Master Plan (completed in 2009) was dubbed the “cookbook.” Hundreds of million dollars in projects have been completed there. A master plan, even one covering only 10 to 20 years, is necessarily general. A cookbook takes a vision or project that is timely and critical and develops a more specific plan on how it might look and how it might get built.

First, there is a picture of what a project can look like, just as you might view an elegant cake in a cookbook. It expresses a clear end-product to get you excited about getting started. The cookbook includes ingredients like parking, streetscapes and a mix of developed uses. The “baking” instructions include the likely participants, such as a public/private partnership, development incentives and funding methods.

Like preparing food, a project that would appear to be complex can be clearly explained and separated into easy-to-understand development pieces. The cookbook is developed over time, when particular projects have windows of implementation opportunity. Such was the instance involving the City Hall block, for which the first recipe in the cookbook was prepared. 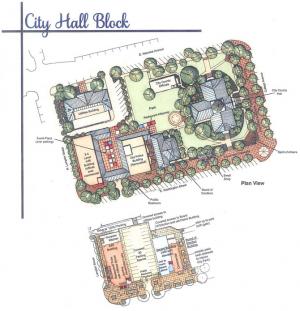 Many participants in the planning process advocated for a family-friendly park in the downtown. By taking the parking lot in the center of the City Hall block and replacing it with a park, this goal would be met both historically and in green space. Athens-Clarke County was about to spend SPLOST money on the very same block, but not with the solution that had evolved in the master plan in mind. To complicate matters further, the plan wasn’t finished and certainly not yet adopted. This was a great chance to implement part of a plan before it was adopted.

A detailed cookbook plan was quickly put together and advanced to the decision-makers, which allowed for improvements to be made on the block that would fit with what would later be called for in the plan. The open space/park portion of the block was presented in an earlier article. The western end of the same block was also covered in the cookbook and is shown here as an example. The site is the open southwest corner of the block, where there is a surface parking lot across from the Washington Street Parking Deck.

The cookbook illustrated a scenario where this underutilized area is infilled by the private sector on land owned by the unified government. The government, using the cookbook plan as a general development guideline, puts out a request for proposals (RFP) to develop the site. The plan suggests a three- to four-level commercial building with a floor area of approximately 6,000 square feet be erected at the corner adjacent to a repositioned parking lot on Lumpkin Street.

Although it’s up to the developer, the building likely would house office space on the upper levels and a restaurant on the street. A planned plaza that covers the parking lot creates a hardscape that is level with the adjacent City Hall Park and expands it. The cookbook diagrams included with this article show a covered parking level with direct access to all four of the surrounding buildings, perhaps reserved during the day for government workers. The park and festival space on top is shown with an outside roof covering the space. With electrical outlets on outside building walls and all-weather roof protection, this is a particularly suitable space for farmers markets and festivals. It can provide self-contained space for small festivals and extension space for larger events, such as AthFest and the Twilight Criterium.

The land rent paid to the government is usually calculated as a small percentage of the rent charged by the building owner, who is solely responsible for the costs to build the facility. The term of the land lease is long enough to make economic sense for the owner. A project like this would tend to need a lease term of between 45–60 years. The income derived by the public could be earmarked in part for the maintenance, enhancement and management of the park and festival space.

This is just one example of how parts of the downtown plan can be implemented using, in this case, both the vehicles of a public/private partnership and land leasing. This doesn’t preclude the government from being the building’s office tenant.