How to Fix Up the Costa Building 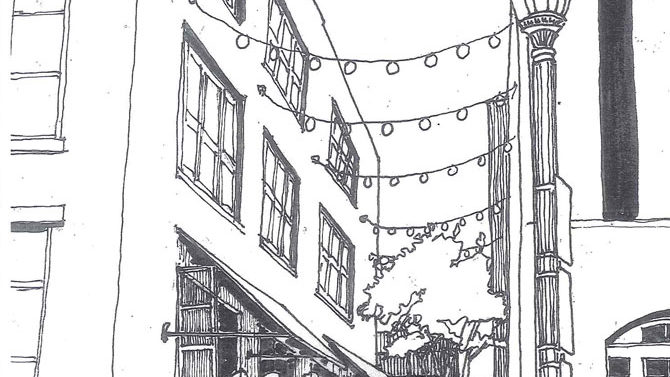 This is part of a series of articles by University of Georgia College of Environment and Design professor Jack Crowley explaining the downtown Athens master plan that his team has generated to guide development downtown.

The downtowns of vibrant cities are complex, and plans for their continued improvement often call for extensive investments in the public infrastructure that attracts private investment. Yet often downtowns can be greatly enhanced by the creative use of small spaces. In fact, a cash-strapped city can keep its momentum during the hardest of times by making improvements on its smallest of spaces. A downtown is as much an assembly of niches, nooks and crannies as it is a grid of large streets and buildings.

There is an alleyway in downtown Athens off Washington Street. It’s very short and lies between Civic Hall (which houses the Board of Elections) and an old vacant three-level Costa Building, which once housed the downtown police substation. In the Downtown Master Plan, the alley would connect the street to the center of a proposed greenspace west of City Hall, but it is fenced off because it is unused—or is it unused because it is fenced off?

SPLOST funding is available to renovate and reuse the vacant Costa Building. So, what if:

• Half of the alleyway between the buildings was built as a walkway between the park at the center of the block, the retail and entertainment along Washington Street and the new parking deck. The walkway might even be sloped to connect the two different elevations.

• The other half of the alleyway becomes the shaded outdoor dining space for a ground-floor café located a couple of steps (or slope) above the street.

• The remainder of the ground floor is leased for commercial or for government-related public service. Citizens could walk in to conduct business with the city.

• The upper two floor levels (connected by an elevator) are used as public or private offices.

• The basement is renovated (reconnected by stair to Washington Street with a new west entry to the parking lot) and is made available to lower-rent-paying nonprofits or technology startup initiatives such as those working with Four Athens. This would be a niche opportunity to encourage the creative class to thrive here in our downtown, where they’d like to be.

In the Downtown Master Plan, this building sits between a proposed city park, a street whose sidewalks are proposed to be widened, a festival space proposed over a redesigned parking area and a commercial building built perhaps by the private sector on publicly leased land. Not a bad location for this “what if?”