This is the fifth installment in a series of articles by University of Georgia College of Environment and Design professor Jack Crowley. In this series, Crowley explains the downtown Athens master plan effort that his team generated to guide development downtown.

This series now focuses on the light rail transit proposal as part of the downtown master plan, and it will be a background to set the stage for more detailed discussion later. It’s a tough topic, because most people will skeptically discount the idea of passenger rail the minute they hear the words “passengers” and “trains.” I’ve had years of experience in transportation development, a number of them as director of the Oklahoma Department of Transportation, and any form of evolution away from big cars on big highways is always controversial.

First, there are two separate passenger rail opportunities related to Athens. One is getting to Atlanta from Athens (commuter rail, often called the “Brain Train”). The Atlanta–Athens passenger rail has long been debated, and an earlier effort was made to have it in place for the Athens Olympic venues in 1996. The subject was further complicated last year by a study of five alternative intercity high-speed rail routes between Atlanta and Charlotte, NC. Two of the five alternatives would serve Athens—but more about that later. 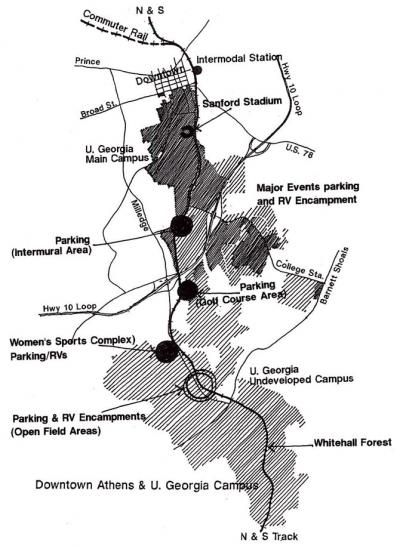 The second opportunity is a local light rail that would run from the downtown Multimodal Center down the length of the University of Georgia campus. This route could provide access to and from downtown for tens of thousands of students, faculty, staff and visitors. The decision to develop this transportation option lies beyond the Downtown Master Plan, largely because only a quarter-mile of the initially proposed segment of two-and-a-half miles lies within downtown. It will require the university’s approval and participation and will involve land they don’t own.

Focusing on this local segment is more important than focusing on the connection to Atlanta, though, because the feasibility of the latter is in part contingent on the existence of the former.  Introducing an alternative longer-range form of transportation makes it dependent on the ability of its passengers to get to their local destinations after getting off of it. Since downtown and campus collectively have the most destinations and population densities in the region, local rail service should most logically start there. MARTA is beginning to do a decent job of giving commuters options on the other end. Local light rail is also a much smaller and less expensive project that would have a better chance of realization.

Another bigger picture consideration is that experts in determining the feasibility for developing rail transit will focus on potential ridership, and that means urban density. The threshold is generally seen as densities in the range of 15 residential units per acre, and Athens is less than half of that. It’s also widely held that low-density urban areas are not cost-effective in providing good urban services, and that higher-densities are better. The automobile form of transportation is not capable of encouraging those densities. Fixed guideway (rail) passenger transit does encourage higher densities. A more progressive argument, then, is that we need to develop rail transit to encourage the more cost-effective densities, rather than wait around for them to happen with cars or not at all.

That particular argument is made moot by understanding that a much more dense development already exists and already justifies rail transit in Athens. Its educated demographic of students, faculty, staff and research scientists is also an ideal target ridership. It’s also a demographic used to an existing but slower form of bus transit. The built-up part of the UGA campus that abuts downtown is roughly one square mile (640 acres). Its daytime population approaches more than 40,000 people, a density in one small area that rivals Boston or Chicago. There are 10 million boardings on the UGA bus system per year, another statistic that falls well within the ridership level justifying rail. This is true even projecting that only half of that ridership might be captured by a rail service that would transect the full length of the oblong-shaped campus.

Keep in mind that the Norfolk & Southern Railroad owns the track and its right-of-way. They have often said that while a local short-line operator railroad (the Hartwell Railroad Co.) leases the line for occasional freight operations, they might like to keep it as a potential freight corridor to bypass future congestion in Atlanta. That should be a bit frightening to the bucolic UGA campus.

It’s also been known to be for sale, not as a short segment, making the rest of the track useless, but as a 38-mile length between Center, a small town north of Athens, and Madison. The acquisition price is likely less than $10 million, and many attempts to convince the state Department of Transportation to buy it over the past 20 years have failed. Hartwell Railroad is presently attempting to purchase it, and they have mentioned the potential for a partnership. Ironically, they transport coal to the UGA Central Plant, and the possible switch to another type of fuel may well change the freight-rail landscape.

Local purchase in one form or another will allow a bicycle/pedestrian corridor to parallel the relatively flat course of the railroad, and improvements on the rail portions of the corridor should always include the specifications for freight as freight rail transportation will be an important part of our economic future.

There’s always been the criticism that transit rail requires subsidies. So does highway transportation. What sort of tax structures do you think it takes to keep fuel costs at rates half of European prices? Local streets are maintained and often built by local taxes.

Finally, a big frustration with passenger rail startups has always been our failure to realize that when the day comes that fuel costs and highway congestion cause us to begin to believe that we need an alternative, it will take 10–15 years to get the new form of transportation in place. We won’t be able to get in line for federal startup funds then, because many cities are already in line, and the wait will add another five years or so.

So, at great risk to my personal reputation and for good and logical reasons, I say we need to start planning to implement light rail transit now, and yes, it should fall in the 20-year window of our Downtown Master Plan.