Smoking Stubbed Out on the UGA Campus 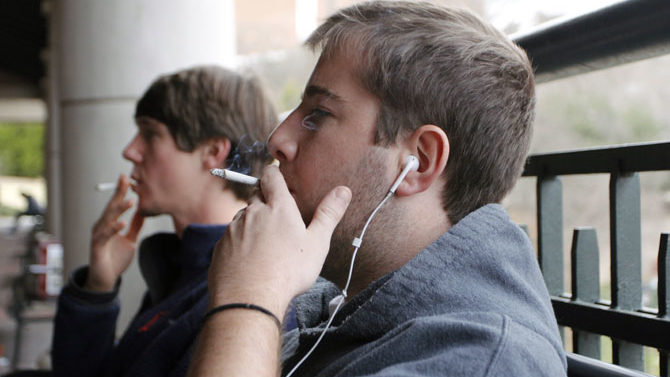 Smoking will be banned on the University of Georgia and other public college campuses effective Oct. 1 after a state Board of Regents vote Wednesday, Mar. 19. The tobacco- and smoke-free policy states that the use of “all forms of tobacco products,” including cigarettes, cigars, pipes, chewing tobacco and electronic cigarettes, will be prohibited on any property “owned, leased, rented or in the possession of” the University System of Georgia, which means no smoking anywhere on UGA’s campus, including the parking lots.

The goal of the policy, according to higher-ed officials, is to improve the overall health, comfort and environment of students, faculty or anyone visiting the campus. But many students say it will do little to actually stop people from smoking.

“There are ‘no smoking’ signs all over the benches here, and people still smoke out here,” says Molly Cutts, 22, an advertising major standing outside the Miller Learning Center. “I don’t think people are going to go all the way downtown to smoke, and if you’re in the MLC during finals and it’s open 24 hours, of course you’re going to go out and get a cigarette.”

David Jernigan, 23, a German and sociology major at UGA, also says it won’t stop him or anyone else from smoking. “I think it’s going to be really difficult to enforce, especially on UGA’s campus because it’s massive,” he says, adding that it will be an “unrealistic ban.”

Jernigan says he understands that secondhand smoke is dangerous, but he wonders what difference it will make when so many students drive their cars, which “emit greenhouse gases,” to school.

During midterms and final exams, the MLC and Tate Student Center are filled with students, some of whom smoke. Nick Ganger, a 21-year-old student, says that at any given time you can see 50 or more people outside smoking.

“I come out here during my study breaks to give my brain a chance to absorb all the information that I’m getting. I don’t like that rule at all,” Ganger says. “I don’t like how it could affect my enrollment at any institution based on the fact that I smoke cigarettes, and I think they should change that immediately.”

The overall enforcement and authority on the smoking ban policy, including any exemptions, will lie with President Jere Morehead (who could not be reached for comment), but it will also be a shared responsibility among all students, faculty and staff to help keep the campus tobacco-free. Anyone who is employed by the university has the right under the code of conduct to ask a student for an ID. Any student or employee caught violating the policy will be referred to human resources or student conduct.

UGA Police Chief Jimmy Williamson says he is confident that the majority of people will follow the rules. He doesn’t expect to devote many resources to enforcement. “The policy was not created to be a police issue. We’re not going to have any special smoking police or tobacco police out there looking for things,” he says, adding that they’re going to be reactive with this policy like with other potential conflicts, such as someone skateboarding and getting in the way of pedestrians. “I have yet to see a situation where there’s massive pushback,” he says.

The university is still in the midst of talks regarding what punishments would be handed out for offenders, Williamson says. Visitors refusing to comply may be asked to leave or escorted off campus.

Ganger says he finds that hard to believe. “I feel like everybody’s probably still going to keep smoking. If everybody continues, they can’t kick everyone out,” he says.

Ganger’s smoking companion, Justin Hess, 20, is more measured. “I can understand the purpose behind it,” he says. “I mean, honestly, everyone knows smoking’s bad. We’re adults, we make adult decisions. I never tried to get my smoking in the way of other students.”