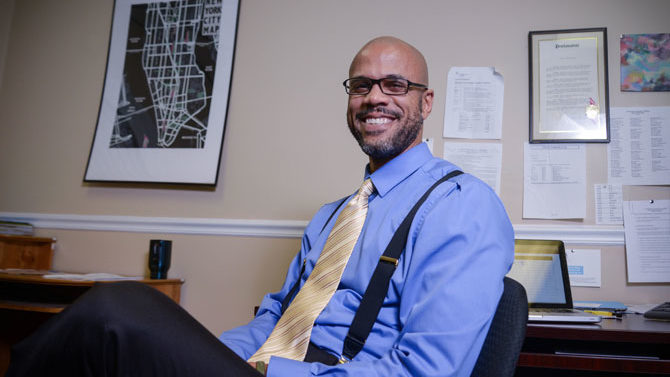 Perhaps it’s serendipity. Perhaps it’s hard work mixed with luck. Perhaps it’s what happens when you live in places like Athens or New Orleans that are really small towns disguised as larger cities.

As Fenwick Broyard sat on a recent Saturday morning at a local coffee shop, it happened again.

Broyard, who started work last year as the executive director of Community Connection, wasn’t talking about the MLK Day of Service coming up in two days or the nonprofit’s big annual fundraiser, A Taste of Athens, in a few weeks. He had just described his plan to implement GIS mapping software at the agency. The idea is to overlap the locations of the calls coming in to the 211 help line with the locations of service agencies in Community Connection’s coverage area. The result is a visual solution to provide services in areas that need them most. The project is in its infancy, with Community Connection just starting the process of working out financing and programming.

A man leaned over from a neighboring table, introducing himself as a professor at the University of Georgia. He teaches a graduate class that is learning GIS mapping, and the students are looking for a project to tackle.

Another serendipitous connection made.

The GIS idea is just one of several projects Broyard plans to take on now that he’s getting the feel for his new position. He also happened to come to Community Connection in its 30th year and says he’s reinforcing the organization’s roots of connecting social service agencies to those who need them—and finding gaps that need to be filled.

“My intent was to get back to the core of why it was founded,” says Broyard, who has taken time in his seven months at Community Connection to talk to local leaders who have held the position in the past. “Reconnecting to that vision has been my vision; we’re at that point now where we say, ‘Let’s pull back and see where we are.'”

Broyard has been in Athens for three years. Since arriving, he’s crossed work on his master’s degree at UGA with volunteerism and work on new community-driven projects. As a student, he worked with the Athens Land Trust and the Clarke County School District to start the West Broad Market Garden, a community garden and farmer’s market at an abandoned school. He also started a work-study program at Classic City High School that teaches teens about running a business and pays them for their work in the garden.

Before he was breaking ground on an urban garden, Broyard was learning how to manage one in North Carolina. And before landing on a farm, he was working at a homeless drop-in center and studying for his master’s in public health in New Orleans. And before that, he was studying for his PhD in geophysics at Columbia University, thanks to a Packard Foundation fellowship.

Oh, and he’s also an accomplished slam poet with a self-published book.

Broyard’s journey began in his hometown of New Orleans when a high school teacher inspired him to study physics in college. Everything was going according to plan until his senior year, when he had a chance to take more esoteric social sciences classes. He realized a seed—planted years ago by his mother, a nurse at a school health clinic—was sprouting within him.

“But it was too late,” says Broyard, who ended up attending Columbia as a Packard Foundation fellow, which paid for a doctorate program in the sciences. Serendipitously, his roommate, a political science graduate from Amherst College, arrived with a library of books that called to Broyard. “I did just enough to keep my fellowship, but studied his library,” he says. When a close friend from high school died, Broyard realized he was setting himself up for a life that wasn’t what he wanted.

“Every man dies, but not every man truly lives,” Broyard says, recalling a quote that inspired him at that time. “So that emboldened me to pull out of the [fellowship] program.”

It took many years for his family to stop chiding him about that decision, but he’s never looked back. He returned to New Orleans to teach middle-school math, but not long after leaving the city, the Sept. 11 attacks again had him soul-searching. “So in the wake of social justice and international diplomacy, I found myself with a lot to say and not enough places to say it.”

Which is when he discovered spoken-word poetry.

He’s more comfortable simply smiling and shaking his head about that time in his life, but it left a mark nonetheless. For a year, he worked odd jobs and toured around the Southeast, selling his book while his singer-songwriter girlfriend sold her CDs. When they returned, his mother asked him to lend his youthful New Orleans voice to a meeting with social workers. “A woman at the meeting invited me to come help her. She brought me on to do street-level outreach,” he says. “Performing eradicated any fear I had of talking to people. I really enjoyed that work, but the problem is, you can’t make a living doing outreach.”

His boss encouraged him to apply for a master’s in public health program at nearby Tulane University. He set up a meeting with the dean and was accepted on the spot—he just had to fill out an application. On the day of his orientation, Hurricane Katrina struck.

“We woke up and saw Katrina on TV, and the mayor of New Orleans was basically crying, telling people to leave,” he says. He and his fiancée decided to go temporarily to Atlanta, where Broyard’s family now lives. They intended to return. “On my birthday, the levees broke,” he says. “We knew we didn’t have a home to go back to.”

After spending his “Katrina semester” at Emory University, Broyard made his way back to Tulane and eventually completed his master’s—only to discover that all the jobs he wanted required a master’s in social work.

With his family now in Atlanta, “UGA made the most sense for me,” he says. “Very few programs offer financial support toward a master’s degree [and] I was awarded an assistantship.”

One of Broyard’s professors at UGA, Tom Holland, says he continues to be impressed by Broyard’s abilities and leadership. “He was one of the most capable, quickest students I’ve ever had. A real natural leader,” says Holland, professor emeritus in the Institute for Nonprofit Organizations. “I found him a delight as a student. He was more mature than most of my students, so I had very enjoyable conversations with him. And after a couple of months I invited him to go along with me to a couple of consulting jobs, and he just took to it like a fish to water.”

While he was awaiting his acceptance letter from UGA, Broyard’s path took one more turn—this time to a farm in North Carolina. Inspired by a job opening for a community garden coordinator at the Athens Land Trust, Broyard and his young family—his daughter was born in 2011—went to learn more about farming methods.

“We went to North Carolina, I got my acceptance letter from UGA and I decided I really enjoyed growing food and getting it to young people,” he says. “I wanted to establish a farm training program for at-risk youth.”

Within months of arriving at UGA, Broyard had made a connection with the Athens Land Trust, which eventually offered him a paid internship to revamp the organization’s community garden network. He then worked out an agreement with the school district to begin farming land at the old West Broad School site.

As graduation drew nearer, Broyard learned that Community Connection’s previous director, Julie Meehan, was leaving to pursue her own master’s degree. Holland, who was president of the agency’s board, encouraged Broyard to apply for the position. And he did, with Meehan’s blessing.

Former Athens-Clarke County Mayor Gwen O’Looney, who started Community Connection 30 years ago, met Broyard when he was a UGA student; they were both volunteering at Classic City High School. She says she’s excited to learn of his plans to focus on Community Connection’s core services—the 211 help line, nonprofit development and volunteer coordination through HandsOn Northeast Georgia—and he brings a new outlook to the agency. “I’m delighted about bringing a stronger focus on consumer advocacy and followup,” O’Looney says. “I think he’s seeing a higher level of accountability, and that means a higher level of service.”

Tim Johnson, executive director of Family Connection/Communities in Schools, served in the same position at Community Connection for 11 years. Johnson’s organization—along with Project Safe, the Athens Area Homeless Shelter and The Ark, to name a few—came from the nonprofit development arm of Community Connection, which seeks to fill gaps in social services. “I can’t imagine anybody better for the position,” Johnson says. “He’s smart, and he’s got a good vision for where Commuity Connection is and where it can go. He has a good understanding of the community, and he’s been here long enough, but brings a fresh perspective.”

Along with the GIS mapping project, Broyard is working to expand the network of volunteers through a high school program and one with companies. The high school program trains rising seniors and places them with a nonprofit; it’s the students’ job to help promote that organization and do fundraising, with the end result not only helping their resumes but also getting them involved in their community. Broyard is meeting with business owners who want their companies to become more involved, picking a project or cause and donating employees’ time on a workday to the effort.

Broyard contends that while there’s plenty to do Athens is equipped to handle it—no matter how much serendipity may be involved. “We’ve got the skills and the resources,” he says. “It’s our job to make sure the resources get to who needs them.”

But O’Looney disagrees that serendipity has anything to do with the path that brought Broyard to Athens.”It’s not serendipity,” she says. “It’s knowing that’s your passion—keeping it in focus and in front of you. The resources are all around you, it’s just broadening your reach.”

WHAT: A Taste of Athens

WHERE: The Classic Center