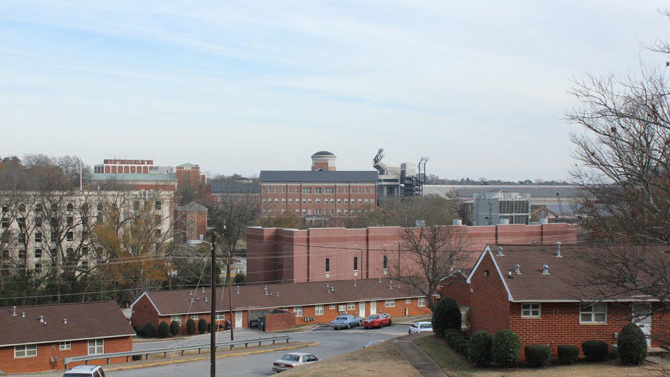 Living across the street from freshman dorms at the University of Georgia, 16-year-old Zaquira Evans is well acquainted with campus life.

A student at Clarke Central High School, Evans says she’s been to campus lots of times, sometimes to hang out at the Tate Center, but other times to walk through the campus or the academic buildings.

“I’ve been over there—there’s a lot of things to go and see,” Evans says. “I know a lot of teenagers who want to go to school out of state. If I had a choice [for colleges after graduation], it’s one of my choices. But when you’re here your whole life, you want to go explore.”

More students will have that chance, thanks to Experience UGA. The idea behind the partnership, which launched earlier this year, is to bring Clarke County students to campus at least once a year during their time in the school district, says Claire Coenen, the program’s coordinator. That means up to 13 opportunities to visit the campus—and each time learn something in the process.

There’s a dichotomy, to be sure, between the expensive buildings on campus and the low-income neighborhoods like Parkview Homes next door. And in contrast to the many affluent UGA students, the families of most public-school kids in Athens are poor enough to qualify for federal school-lunch subsidies. Nevertheless, many children like Evans growing up near UGA say they already feel comfortable on campus.

Dre Taylor, a 19-year-old Classic City High School student, says he’s found a walk through campus can make him feel like he’s already a student there. “It feels like you go to the university when you walk through campus,” he says, although his experiences—watching games at the Tate Center or using the ATM on campus—don’t automatically translate into a college career. “I think it doesn’t matter. Some people go to school for free anyway, so it doesn’t matter.” 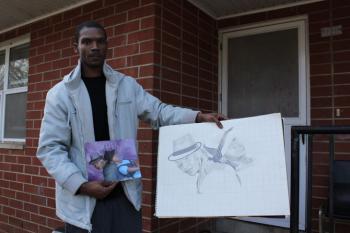 Down the street, David Spinkston, 24, says he would love to visit the Georgia Museum of Art—but he simply doesn’t have time. A former student at the Art Institute of Atlanta, Spinkston had to quit when he couldn’t afford tuition. Now, he’s working at Waffle House and trying to pay down some student loans before he continues his education. “I looked into [applying] at Lamar Dodd [School of Art],” he says, but he’s concerned about his loans.

UGA administrators want to welcome local K-12 students onto campus in a more formal way. Coenen and the advisory board of faculty and staff from both educational entities have been reaching out to various colleges within UGA, looking for ways to incorporate experiences or lessons into the curriculum at various grade levels.

“Different departments on campus have found out about us, and they’ve been in contact, interested to get involved,” Coenen says. “We’ve worked with the school board to see what fits.” 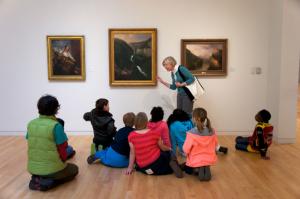 Clarke County fifth-graders on a trip to the Georgia Museum of Art.

The College of Engineering, for example, has an idea to bring students in for a hands-on physics lesson. The Georgia Museum of Art already has an established program to bring fifth-graders into the museum that’s being folded into Experience UGA, and this fall a group of seventh-graders traveled to the State Botanical Garden to learn about food production and growing plants.

Shannon Wilder, director of the Office of Service-Learning, which is coordinating the project, says it’s these varied experiences that not only enhance students’ lessons in schools, but also allow them to experience college life. By interacting with professors and college students, they get a glimpse of life after high school and can envision themselves in a college environment.

“The Office of Service-Learning at UGA is all about experiential learning for UGA students, so it’s been a wonderful partnership with Clarke County schools to work with them to create experiential learning opportunities for CCSD students,” Wilder says, adding that field trips are often one of the first “extras” that are cut when a budget shrinks.

Anisa Sullivan Jimenez, director of public relations for CCSD, says it costs $13 an hour to send a bus on a field trip, plus another $2.25 per mile, for an entire grade. That means, if a school wants to send a class on a field trip that’s just five miles away, it can easily cost $300 for a half-day trip with four buses. But with funding from the UGA President’s Venture Fund, the office of the vice president of service and outreach at UGA’s Franklin College and a few other sources, the money is there to at least begin taking kids on these field trips.

Although, Coenen points out, the program is not yet fully funded. An event planned for this spring will not only raise more money for the program but also raise awareness of the costs. She says many parents and UGA staff also have expressed interest in helping to fund the program.

For low-income students, especially, the experiences gathered during a field trip can multiply when later applied in the classroom, according to Matthew Wheelock, a former teacher who in 2005 started the nonprofit Live It Learn It. In a column written for the Washington Post—and cited by Wilder—Wheelock writes: “To bridge the experience gap, schools should reinvigorate the much-maligned field trip. When done right, a field trip is an inexpensive but powerful form of experiential learning that can boost academic skills and motivate students to excel.”

But ask many middle or high school students about their impression of the UGA campus, and they are likely to know it for its football or basketball games and game day crowds—unless they’ve gone for a field trip.

Jermaine Johnson, 8, a student at Barrow Elementary School, recently spent time at the Georgia Museum of Art. He also took a trip to Lake Herrick with his class and recalls studying the ecosystems of the fish and wildlife there. Eleven-year-old Joel Rodriguez, a student at Clarke Middle School who lives within walking distance of campus, says he’s been there to shop at the bookstore or hang out at the Tate Center. Going with his classmates, though, would be different, he says. “You’d be learning about something.”

One aspect of the Experience UGA program that makes it effective is its repetition, Coenen says. By going every year and seeing something different, students graduate from high school with a range of experiences. “There’s a lot of exposure,” she says. “The mission is twofold: We want to take advantage of the current resources to enhance the students’ education and also get students to think about higher education. In my mind they’re equally important. I just think it’s really important that students feel welcome on campus.”

Evans thinks the program will benefit students who, unlike her, don’t live within walking distance of campus. “I think it would make a difference if people know what [UGA] has to offer,” she says.