Expanding ACC’s Animal Shelter Will Save More Dogs and Cats 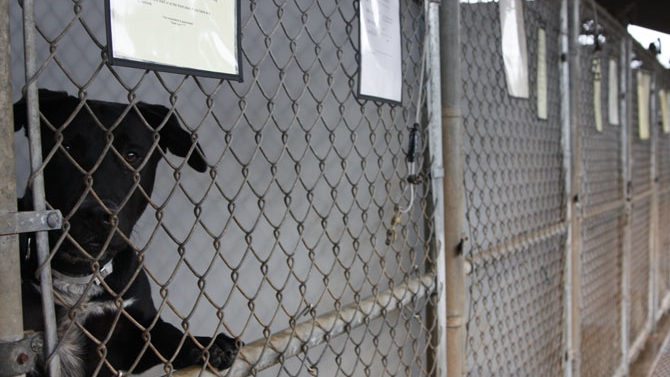 The Athens-Clarke County Animal Control facility will soon be getting more space to house stray cats and dogs.

As part of the project, which is broken into three stages, Animal Control wants to add five kennels to the existing 30 right next to the current building, says superintendent Patrick Rives. They will be separate from the existing kennels to house dogs that are quarantined for potential rabies. The extra space will mean that Animal Control can keep more dogs for longer before they must be euthanized.

The upcoming expansion will benefit people as well as animals. The addition will include more office space for the current staff. Five officers and a supervisor currently share one telephone and two computers in a small room. All of the evidence they collect in abuse, neglect and biting cases, along with the case files, is also stored there. Rives hopes to have a dedicated evidence room to increase security as well as an area specifically for general storage to free up office space.

There are plans to turn the current office space into an indoor volunteer area, where people can come in and perform tasks such as bathing dogs. A “puppy room” is also planned, according to ACC Manager Alan Reddish.

Rives acknowledges that this is just a “basic building footprint” right now and in the upcoming weeks hopes to have actual schematics for the upgrades. “At this point, the architect is actually coming up with schematic options incorporating the feedback from the mayor and commission about what it is they wanted to see,” he says.

The commission unanimously approved the preliminary concept plans Tuesday, Nov. 4, and is tentatively scheduled to vote on a more detailed set of plans in December.

Rives tells Flagpole that it’s a “constantly evolving thing” and that nothing is set in stone yet. “A lot of these things, we come up with these great ideas and then you run out of money,” he says. “So, it just depends if additional funding can be found.”

Voters approved $601,000 for the animal shelter expansion as part of a package of SPLOST projects in 2010.

The second stage of the expansion is to add a cat area. The current cat shelter is in the former Athens Area Humane Society building about 100 yards down Buddy Christian Way from the dog shelter. (The humane society cut ties with ACC and opened its own no-kill cat shelter in Oconee County several years ago.) The cat shelter sits in the exclusion zone for a planned Athens-Ben Epps Airport runway extension, which according to Rives means “that building eventually needs to go away.”

The idea for the new cat area is to consolidate a wing into the main building, where they currently house the dogs. Rives hopes that the new cat wing will contain an area for intake, food preparation and janitorial services as well as general adoption and several isolation rooms.

“There are obvious efficiencies in coordinating all of our staff in one building as opposed to having our operations separated into two buildings,” he says.

The third and final stage of the ACC Animal Control expansion plans—if there is enough funding—includes two parks for large dogs and two for small dogs, to give the areas a break from continual use. Rives says that having a dog park next door woul bring more people to the shelter, which might lead to an increase in volunteers and adoptions.

Right now, Athens dog owners visit the Wiggley Field dog park at Southeast Clarke Park couple of miles from the shelter, which Rives says is in “poor repair” because of its constant use. “It’s got one large dog area and one small dog area. And it’s used every day, all day long,” he says. Leisure Services also runs off-leash dog parks at Memorial Park and Sandy Creek Park.

Although the ACC Animal Control placement rate is 95 percent, Rives thinks that all three of these new additions will probably help increase adoption rates.

About 3,000 animals come into the ACC Animal Control Shelter a year, and two-thirds of those are dogs. Some of those cannot be put up for adoption for various reasons.

“Not everything that comes here is available for adoption,” Rives says. “We deal with dogs, cats, livestock and wildlife. But if we get a raccoon, we can’t adopt out a raccoon.”