Bring Back the River District 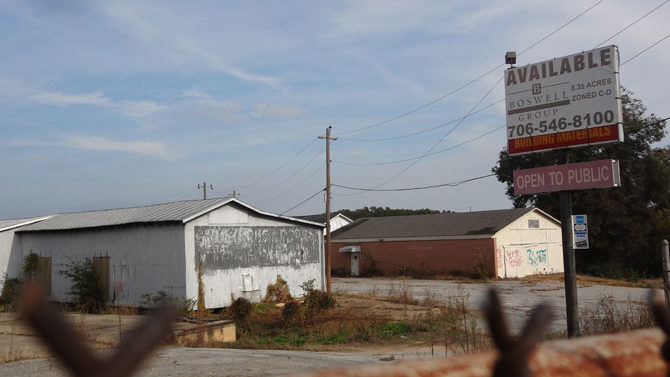 Selig Enterprises’ plan for a massive 10-acre compound of high-rise, student-apartment-coated parking decks on downtown’s doorstep has officially bitten the dust. For the many local activists who opposed the project from its initial announcement in November 2011 all the way through the redesign, official submission and approval this summer, all that yelling and screaming, both online and at the podium, all those phone calls, sleepless nights, calls for action, and constant meetings have paid off—for now.

Some of us never gave up. Even after the project got the go-ahead from the Athens-Clarke County Mayor and Commission, we obtained open records, sent emails, made phone calls and, yes, consulted attorneys.

Who knows if any of this influenced Selig’s decision to pack it in? Their official story about changes in the marketplace is definitely believable, and community outcry certainly stalled the project, allowing several other projects to get the jump on the downtown luxury student housing market. At this point, one wonders if even those already under construction stand much chance of making it in the new economy.

But we also must wonder if GDOT didn’t like the plan to reroute two lanes of state highway into a dog-leg down what is essentially an alley (Foundry Street) to take a left turn up the steep hill of East Broad Street. Or perhaps the State Historic Preservation Office stepped in to protect a National Register Historic District and historic rail corridor.

The ACC Future Transportation Corridors Concept Map shows both a rail-trail and an extension of Hickory Street traversing the property and connecting to UGA’s North Campus at Thomas Street. But the Selig development would have obliterated intended connective corridors between the Multimodal Center, the rails-to-trails project running parallel to Oconee Street, the park-and-ride lot a mile to the southeast and the region’s largest employer, the University of Georgia.

There was an alternative, but Mayor Nancy Denson, who was snuggly with Selig from the beginning, effectively killed the Blue Heron/River District project proposed by the now-defunct ACC Economic Development Foundation and local developers in 2010. Blue Heron was a $25 million public-private partnership proposal to lure business, tourism and research development to the area between downtown and the North Oconee River. The Armstrong & Dobbs tract between East Broad and Oconee streets was to make up the lion’s share of the district.

ACC officials had misgivings about voters’ willingness to support bonds to fund the project. Denson then delayed the release of a warm, fuzzy economic feasibility study that projected Blue Heron would bring $4.2 million in tax revenue and 2,500 jobs with average wages of $65,000 until after Selig acquired an option to buy the property. She then called an illegal, closed-door meeting to cancel hiring a project manager in September 2011, revealing that a private developer had gained rights to the property and Blue Heron was no longer feasible. Two months later, Selig announced its plans, and the rest is history—along with the Selig project.

While the mayor served as Selig’s head cheerleader all the way through the planning process, open records reveal that ACC did not inform nearby property owners of a December 2012 pre-application conference with Selig, one that also excluded the commissioners whose districts were affected: Kelly Girtz, Alice Kinman and Harry Sims. Planners subsequently brushed aside concerns about the development from the Transportation and Public Works and Leisure Services departments, the Greenway Commission and the Rail-Trail Committee.
When the project came up for the final vote, citizens lined up by the dozens to plead for a delay. ACC Planning Director Brad Griffin, Manager Alan Reddish and Attorney Bill Berryman shrugged off the corridor issues in an expertly choreographed tap dance. Commissioners Jared Bailey, Jerry Nesmith and George Maxwell sensed something was rotten, but Commissioner Kelly Girtz’s last-minute compromise to improve bike and pedestrian access through the development provided enough of a rose-colored smokescreen to obscure the project’s very real transportation problems.

As the dust of Selig’s folly settles, let us take a step back to three years ago and see if perhaps Blue Heron can rise again. Don’t count on Mayor Denson to lead the charge.

“I am very sad to see what I considered a very good project for our downtown, built by a reputable company who build to keep and manage versus a speculative build-and-flip project, abandoned,” she said.

Add to that the fact that the EDF has been dismantled and replaced with an Economic Development Department overseen by ACC Manager Alan Reddish, who had nothing good to say about Blue Heron from the beginning.
The fact of the matter is, for the most part, the project complied with the ACC zoning code. Another one just like it or worse could come on its heels if the powers-that-be do not start to heed our adopted plans and policies. We should also move to implement new regulations dictating reduced density, updated parking guidelines, historic and natural landmark protections and a greenway overlay zone to guide appropriately scaled and buffered development along alternative transportation corridors to ultimately encourage their use.

It is now up to everyone out there who hated Selig’s plan to barrage the Mayor and Commission with pleas to prevent a similar fiasco from ever happening again. Let them know you really mean it by showing your faces at City Hall the first Tuesday of every month wielding pitchforks at the podium until they follow through.