Downtown Athens Is at a Crossroads 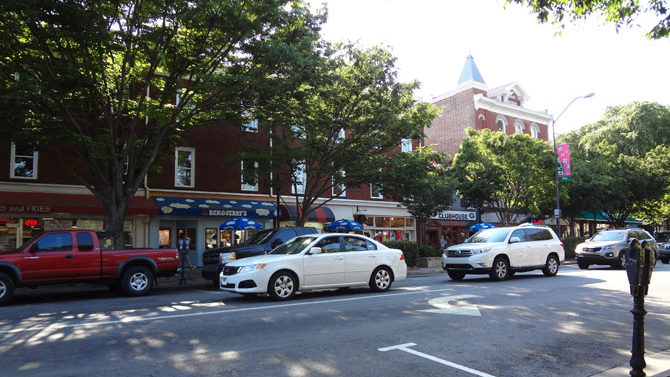 Athens is abuzz these days with planning the future of its built environment. The recent Great Walmart Debacle lit a fire under the masses who cried out for some policy action to insure the protection, preservation and smart growth of our treasured downtown.

While a downtown master plan is nearing completion, a recent visit from the acclaimed author of Walkable City: How Downtown Can Save America, One Step at a Time, Jeff Speck, assured us that we’re “not that screwed up.” But we stand at a crossroads where we could very well take the road to screwed up soon enough. The public, as well as economic pragmatism, screams for walkability, yet those with big bucks and the ears of the powers-that-be are chained to a failing auto-centric past with a primary concern for maximum short-term personal profitability. Exhibit A: Selig Enterprises’ mixed-use development on the Armstrong & Dobbs property, which features two parking decks with 1,400 spaces—one for each and every student who will live in the apartments wrapped around them and then some.

Master Plan to the Rescue?

At least the downtown master plan will assure some smart growth guidance for our precious cultural center, right? Not so fast! While the master planning team is to be lauded for its efforts, outreach and concepts, it is becoming evident that their recommendations, which are based on public input, are being rehashed, watered down and abandoned behind closed doors and away from the public eye by people with ulterior motives and a limited understanding of the needs and wants of the everyday people who live, work and play downtown on a daily basis.

Some of the work is being withheld from the public as the Athens Downtown Development Authority-appointed steering committee thwarts public comment by forbidding the team from presenting concepts for College Square and a downtown river district. Those concepts have been fully developed, and the public overwhelmingly supports addressing both those areas in the plan.

The team was also directed to ignore Clayton Street, which has SPLOST funding for a total infrastructure and streetscape redesign. Logically, this could be the first project from the downtown master plan to see fruition, but instead it remains fully in ACC’s hands and will be addressed through the usual barely publicized, sparsely attended and minimally guided ACC public input process.

It is becoming evident that the downtown master plan might just be lip service intended to shut up recent public outcry against overdevelopment of our thriving cultural center—something to keep us distracted while very real decisions are being made behind our backs. One must wonder if, despite urgings from both the public and Commissioner Jared Bailey, the mayor refused to consider a master plan as a part of ACC’s fiscal 2012 budget and handed the project over to the ADDA to assure that the final plan is determined by a body with limited public accountability. Our elected officials can thus wash their hands of real responsibility.

The mayor sits on the ADDA board, but her distaste for public input and open information and her “bring on the bulldozers; toss up the big boxes” approach to intown development leave little hope that she will heed the pleas of smart-growth advocates. Commissioner Mike Hamby also sits on the ADDA board, but his role in the resignation of Executive Director Kathryn Lookofsky casts doubt that he would exercise some influence in assuring that the public is given full information and allowed to participate as the process moves forward.

It is utterly confounding that the ADDA would accept the resignation of its director—a tireless advocate for local businesses and creative culture—smack dab in the middle of the planning process. It remains to be seen if a new director will continue such advocacy or instead serve as a corporate tool for big development geared toward franchise businesses and their minimum wage service jobs that provide college kids with beer money while the profits leave the community to line the pockets of billionaire CEOs, shareholders and Atlanta real estate moguls.

Masters Behind the Scenes

The final decisions on the downtown master plan are being made by a very select few. In fact, many downtown property and small business owners from the retail, bar and entertainment industry were excluded from an organized meeting leading up to the master planning process. Bailey—president of the Downtown Athens Business Association, one of the founders and executive director of AthFest, former small Business Coordinator for the ACC Economic Development Foundation, former co-owner of the 40 Watt Club, founder of Flagpole, an ACC commissioner and the logical go-to guy for all things downtown, music scene and small business—reports that he was never once invited to offer input on the master plan. Joey Tatum, owner of multiple downtown properties and long-standing businesses, including the Manhattan Cafe and Little Kings, reports the same. That also goes for Clayton Street shop owners Airee Hong and Jane Scott, two of the more active voices against the Walmart that Selig originally wanted to put downtown that led up to the master planning effort.

So who is calling the shots on the downtown master plan? In addition to Denson (who won election in a campaign bankrolled by development interests and Republicans) and Hamby, the ADDA Board  includes Selig’s public relations liason (who is also a Republican Watkinsville City Councilman and sits on the board thanks to his position as Athens Area Chamber of Commerce chairman), a real estate agent and developer, two lawyers (one of whom is a Republican state representative, the other a former local Democratic Party chairman) and a restaurateur who’s lived in Athens less than five years.

These seven individuals appointed an nine-member steering committee that includes three developers. One specializes in suburban strip mall and medical offices, another is currently engaged in a large downtown project on the SunTrust property and another also sits on the ACC Historic Preservation Commission.

Also included are one retail business owner who has written multiple letters to the Athens Banner-Herald opposing bike lanes and championing cheap parking and more decks; a bar/cafe owner who once supported Charlie Maddox for mayor (the same Charlie Maddox who was an outspoken supporter of the downtown Walmart); an accountant who once ran as a Republican candidate for ACC Commission; a trust manager who also sits on the Athens Cultural Affairs Commission—the only committee member with any creative culture credentials whatsoever—and a planner formerly with ACC now with UGA. Only a few members have any real interest in or experience with preservation or smart growth initiatives. And none of them have any real ties to the local music industry—the very scene that put downtown Athens on the map in the first place.

The Republican representation on the ADDA and the downtown master plan steering committee is skewed, considering the solidly progressive Democratic leaning of intown Athens. The GOP has been trying its damnedest to hijack Athens politics by making local elections nonpartisan, moving them to the summer and redrawing commission district maps—all ploys that have failed to get Republicans elected in Athens. Their only hope to gain local power is to step up to serve on boards such as the ADDA, where they work tirelessly behind the scenes to guide ACC policy.

The state Republican convention settled into the Classic Center last weekend, and downtown Athens was swarmed with rich old white dudes. Remember, Republicans weren’t just invading downtown for the weekend. They are actively determining the course of its future.