Runners Are Getting Organized as the Sport Grows 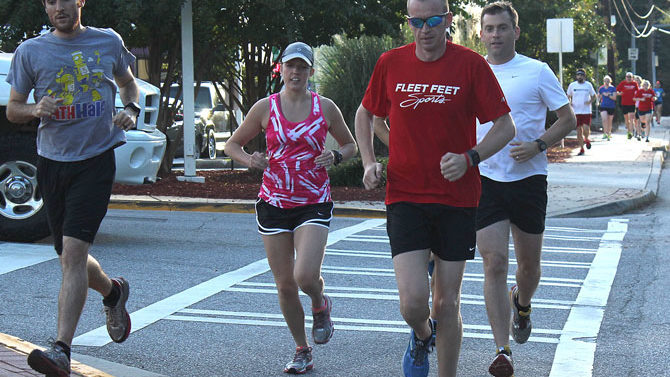 If it seems like a lot of people are in a hurry lately, you’re probably right.

No, we’re not talking about people driving too fast through your neighborhood, although that’s probably true too. These fast people are going on foot, running in droves down Milledge Avenue or through myriad Eastside subdivisions. They’re running for miles at a time, many with one goal: to finish the annual AthHalf, the Athens half marathon on Oct. 20 (athhalf.com).

But a funny thing has happened since this 13.1-mile race began four years ago. People began making the leap from the “couch-to-5K” programs and started training for this longer run through their hometown. Coupled with a slowly improving economy and people realizing it’s a fairly easy way to get a good workout (no gym membership needed, just a pair of shoes), and you have the makings of a sport that’s grown to the point where it’s supporting its own micro-economy.

David Laggis and Mark Schroeder, who opened Athens Running Company on the same weekend as the first AthHalf in 2010, say they can tell the time of year by looking at their sales receipts. Along with a surge of new customers in January—thanks to New Year’s resolutions—they also see a large uptick in business in late summer and fall, in time for the 13.1-mile race. While they call the AthHalf a “happy coincidence,” it’s clear the race has helped drive more interest in running, and more business to their store.

“We had no idea how it was going to affect our business,” says Laggis. “Whenever we start to fit people to shoes, we ask them how they’re going to use them. In that aspect, we take a tally of how many people are training for the half marathon.”

Originally opened in the Bottleworks, Athens Running Company moved to Five Points earlier this year, with Fleet Feet, another specialty running store, on its heels about a block away on Lumpkin Street. Neither planned on the other when looking for a location—each of the store owners had their own reasons for moving to Five Points—but they see the stores as mutually beneficial. And the end result, with each store hosting several running groups throughout the week, is a hotbed of running activity. This is something veteran runners say was hard to find just a few years ago.

In determining the need for a Fleet Feet franchise, Dustin Shinholser, operating partner of the store, said he found in his research that Athens residents were driving to John’s Creek, the next closest store, for their shoes. But today, the two recently opened specialty running stores in Five Points join New Balance on Epps Bridge Road—along with the running shoe selections at other sports and shoe stores.

AthFest Educates started the AthHalf to help support its nonprofit music education program, and AthFest Director Jared Bailey says the registration numbers support what the store owners are seeing on their balance sheets. Bailey says the first year drew about 2,000 runners, with more coming from out of town than nearby (Bailey counted runners from contiguous counties as “in-town”). The following year, the registrants were about evenly split between the categories, and last year, roughly 60 percent of the 3,000 runners came from the Athens area.

“We’re getting more local runners, or the number of local runners is growing,” he adds, noting that the race is drawing about the same number of out-of-towners as past years. “Basically, the running community in Athens is growing.”

Veteran runners in Athens say there has always been a decent number of distance runners in the Athens area. Fleet Feet’s Shinholser, who grew up competing on area high school track teams, says any time you have an educated community who realize the benefits of good health, you’ll have a running community. But because of the solitary nature of the sport, there was no central meeting place.

“The biking community was really organized, but the running community wasn’t at all,” says Julie Thompson, president of the Athens Road Runners and a pastor at First Presbyterian Church. Thompson’s group formed about seven months ago and now has more than 250 members, with about 75 running in the AthHalf this year. “The Athens Track Club was the only running club in town, and you had to kind of dig to find them,” she says.

Thompson notes another key event in the timeline of Athens running enthusiasts that helped unite the community: the passing of Will Chamberlin. He co-founded Classic City Race Services, known for decades as the official timekeeper of any race worth running. Thompson officiated at his funeral in the spring of 2010, the first year of the AthHalf, and contends that sad event became the catalyst for change in the Athens running community.

“I remember officiating at his funeral, and hundreds and hundreds of runners came. They said, ‘Come in your running clothes,’ which was amazing,” she says. “It overcame me, and I was like, ‘Oh my gosh, we need a place where people can gather.'”

Nearly a year would go by before Thompson would meet longtime local running coach Al Jeffers, and as he helped her train for the AthHalf, she began to meet more and more people getting into more organized running. That spiraled into a more organized effort to create a running club, and last year Thompson and several others found the national Road Runners organization fit their needs, and they started an Athens chapter.

“We launched the day of the Taste of Athens 10K (in February); I had a table at the finish line, and now we have 268 members, seven months later,” Thompson says.

Today, with the dozens of runners who show up Saturday mornings for the Road Runners and WoW (Workout Warriors) boot camp organized long runs, plus other well-attended runs throughout the week, she says the running scene has change dramatically. “It’s a total running town.”

Shinholser agrees. His store had been open less than a week when he started its own half marathon training program, and even so, 50 people showed up for the program. The WoW boot camp training program, which meets Saturday mornings at the YMCA, attracts nearly 100 runners on any given weekend. Down the road at Hendershot’s Coffee Bar, the Athens Road Runners get together for a run and complimentary coffee afterward, and dozens show up there, too.

“There always has been a pretty strong running community before the half marathon,” Bailey says. “But I do think, as the sport becomes more popular, it’s part of the natural progression. If you have a longer race, more people will need to train… When we decided to do the half marathon, we thought this would have a positive effect on the economy.”