Athens PRIDE Is This Weekend 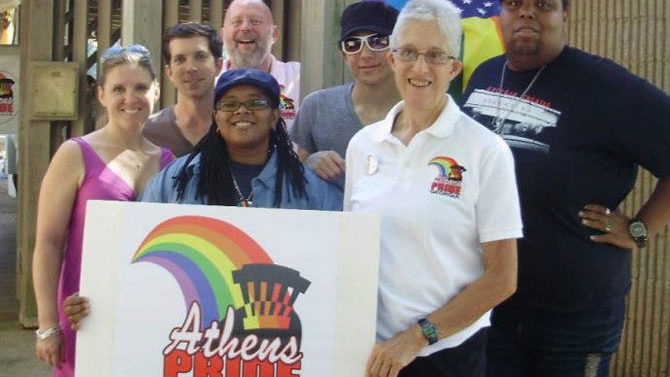 Thursday, Sept. 12 is the start of this year’s Athens PRIDE Weekend. But before celebrants enter the bars for Friday’s Dragaoke and Saturday’s Wigout, they’ll kick things off at… the library.

UGA GLOBES, the campus gay/lesbian/bisexual/transgender advocacy group, has held a reception each fall since 1994. When the first Athens PRIDE Weekend happened three years ago, GLOBES began making its reception the opening event. And this one is taking place in the UGA Special Collections Library.

“It’s a beautiful library, but it’s like no one knows about it,” GLOBES chairwoman DeeDee Kane says. “It’s a great space, and we’re excited about that.”

The reception begins at 6 p.m. and is open to UGA faculty, staff and community members. During the reception, a silent auction will also take place to benefit GLOBES. This year, attendees will hear remarks by Melinda Shelton, the deputy director of Georgia Equality—also a sponsor for this year’s weekend.

“We’re trying to do more collaborative work with them around fair employment, benefits equity and other issues,” Kane says.

The summer’s benefits saga isn’t over yet, but this weekend, GLOBES won’t be worrying about that.

“We’re certainly gonna be moving forward with efforts to build coalitions and gather information and continue to work on that issue and others,” Kane says. “But you really do need to take time to have a little celebration every now and then and just be thankful for the opportunities we have.”

After Shelton speaks at the reception, local a cappella group With Someone Else’s Money will perform. Attendees can graze food donated by The Last Resort Grill, and the rest of the event is a chance for mingling. GLOBES will also use this time to unveil its 2012-2013 Friends & Family resource guide to LGBTQ life in Athens, which is its main annual fundraiser. All of this will be followed by an after-party at Georgia Bar.

And thus begins the third annual Athens PRIDE Weekend, which has evolved from an annual cookout that began with the creation of Athens PRIDE in 1998.

“When I got involved in Athens PRIDE, I wanted to expand PRIDE to make it similar to other PRIDE celebrations around the country,” Athens PRIDE treasurer Ricky Roberts says. “Every year, we try to add something so that we can sort of resemble PRIDES in other places.”

This year, that means adding a sponsorship program. “We asked the community to make donations to PRIDE so that we can make PRIDE better and also have programs throughout the year,” Roberts says.

“Athens is a very welcoming town,” Roberts says. “The city has been supportive of my events and LGBT-related issues in general. We try to make our events accessible so that everybody in the community can come out and have a good time.”

Most parts of the weekend are open both to the Athens LGBTQ community and its straight allies. Some events have a suggested donation of $5, but PRIDE promises to turn no one away.

Between Thursday’s GLOBES reception and Sunday’s Athens Showgirl Cabaret performance, Athenians can enjoy such happenings as a Happy Hour at The World Famous, the One World Artist Showcase at Go Bar and the PRIDE Festival at Lay Park.

“My goal for the weekend is always to raise visibility and inspire unity,” Roberts says. “People who have rallied with us and supported us all year—these events are for them as well.”

Some events, however, aren’t open to everyone. Lesbian and bisexual women are encouraged to attend the sapph.fire Meet & Greet at Go Bar, with proceeds benefiting Georgia Equality. The Globe will host an 18-and-under event Saturday night.

“These events celebrate diversity and equality,” Roberts says. “As we see more and more every day with the federal government coming out and being more inclusive to the LGBT community, it feels like people in the South and all over the country are moving away from the hate. And so we have this weekend to further that idea, that love is becoming the new normal.”