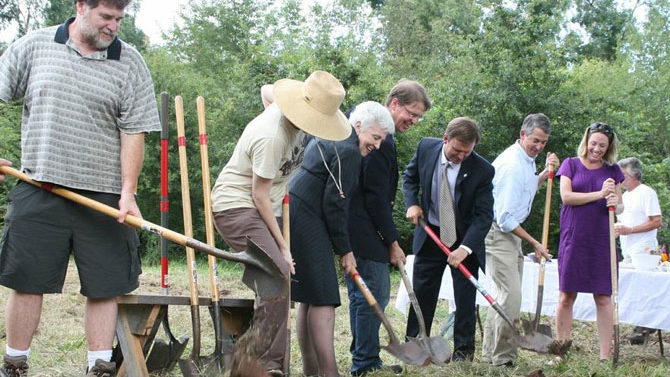 When we say “local food,” we usually mean food produced within about 60 miles from home. But for the farmers at the West Broad Street Market Garden, “local” usually means from down the block.

For two years, the quarter-acre abandoned schoolyard turned mega-garden has been the only urban farm in the city, but the Athens Land Trust has added a second location less than two miles from downtown.

“We’ve just been on [a] tremendous forward roll here,” says Christina Hylton, the land trust’s farmers market manager. “It’s become just a great, diverse way that people can come together to celebrate our community and to promote wellness and sustainable agriculture—a place for the entire community to come together and grow, literally.”

First off, a note to the jaded: anyone who has seen community gardens come and go in Athens over the past 10 years should make a point to visit the West Broad Street Farmers Market Garden on a Tuesday afternoon or on the first Saturday of the month. It’s, objectively speaking, kind of magical.

Elderly women from the Rocksprings and Hancock Corridor neighborhoods, students from Classic City High School, University of Georgia students and recent grads have all worked together to make the quarter-acre in the shadow of the formerly rat-ridden Rutland Academy into a lush garden oasis. It’s become the cornerstone of a 15-community garden network that the Athens Land Trust is now managing.

At the new plot, Land trust board members and staff spent a year negotiating the purchase of what seems like the last piece of land near downtown that’s not covered in apartments, a six-acre plot sandwiched between Ruth Street and the Loop. Garden volunteers, land trust employees board members and city officials broke ground Thursday, Aug. 22 and plan to have fall vegetables ready for harvest by this October or November.

“I’ve seen this farm back here for the past six years,” says state Rep. Spencer Frye (D-Athens). “It’s great that the land trust had the forethought to preserve it before Athens consumes it. Places like this, so close to an urban area, are few and far between.”

The five acres, purchased from the Williams Family for $250,000 and put into a conservation easement, will increase the amount of food available at the West Broad Farmers Market and the number of people who are involved in the urban farming project. The West Broad Street school will continue to host the Tuesday evening and Saturday farmers markets. There has always been more demand for the West Broad Street Farmers Market Garden vegetables than the land could supply.

While there won’t be a public farmers market at the new site, the new farm will allow the land trust to increase its CSA membership from 15 people to close to 45 and expand the amount of produce they can sell to local restaurants, Hylton says.

Currently, the land is zoned for residential use, but it has been a working farm since the 19th century and is grandfathered in for agricultural use.

“I can’t think of many other urban areas that would have five acres like this in the middle of the city,” says Mayor Nancy Denson. “Five acres is a significant piece of land. It’s enough land to grow enough here not only to feed people but to earn some income to support other projects.”

Denson speaks from experience. Her parents were able to feed her and six brothers and sisters on a one-half acre plot when she was growing up near Memphis, she says.

She adds that the current community garden movement is not new to Athens. It has been around informally since she was on the city council in the 1980s, but the concept had been left by the wayside until recently.

The land trust’s short-term goals are simply to increase fruit and vegetable production on the land, but eventually the board would like to see the land used as an agricultural outreach station—offering workshops on organic farming and giving Athenians a chance to work the land.

Volunteers from the University of Georgia and the Clarke County schools have played a big hand in getting the new site ready and will help with tending the new farm.