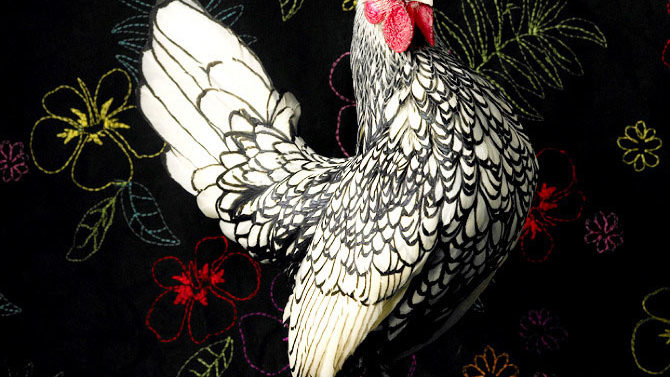 Anyone who has ever tried to take portrait photos of a toddler or a dog knows how hard it can be to get them to stand still—much less look at the camera.

Now imagine trying to keep the attention of a chicken. Now imagine 250 chickens.

Patience-trying? Feather-ruffling? Not for Tamara Staples. Staples makes her living shooting still-life photos for book covers and editorial compositions for magazines, but her passion is shooting portraits of chickens.

“There are specific birds that have a personality, and you just don’t know which bird that’s going to be,” she says. “When you put it on set, that’s when you find when they [have] personality—just like people.”

Staples will be in Athens from 6–7 p.m. on Thursday, Mar. 28 signing copies of her newly released book, The Magnificent Chicken: Portraits of the Fairest Fowl, at the Athens-Clarke Heritage Foundation office in the old firehall next door to Avid Bookshop.

Staples grew up in Atlanta, but spent a lot of time in Athens, and that’s where her fascination with our avian friends began.  Her uncle, now-retired University of Georgia professor Ron Simpson, had chickens at his home in Athens. They would sit and watch them together while they talked.

“He would just sit with me and chat,” she says. “After we were finished talking about my pathetic, 20-year-old problems, we would end up talking about chickens.”

Her uncle took her to her first poultry show in Jefferson in the late 1980s, and from there she was mesmerized.

“They were gorgeous;  they were beautiful,” she says. “And there were these people who bred them, and this whole subculture.”

If you’ve never been lucky enough to attend one of these shows, just know that the broilers we see in the cages packed onto the back of semi-trucks are a pale facsimile of what is on display at “fancy poultry” competitions. Chickens come in a whole range of patterns, shapes, sizes and colors, with more decorative plumage than a Sunday-hat shop. People who show chickens are a breed of their own as well, and there’s a camaraderie and kindness that Staples finds engaging.

She started making portraits of the fancier birds at chicken shows across the Midwest in the early 1990s and released her first book, The Fairest Fowl: Portraits of Championship Chickens, in 2001.

Back then, that book was one of only a handful of chicken publications out there. A few people might have had a few hens in their backyards, but certainly no one intown anywhere.

“Since that time people have gone crazy for chickens, and I’d like to think that my book may have had a hand in that,” she says.

Staples decided to revisit her favorite subject to celebrate the public’s new interest in fancy chickens—stemming from the urban homesteading movement and changing municipal laws regarding backyard flocks—and because she’s better at what she does now.

“My skills have improved; I’m better at what I do,” she says. “And I thought I could do a better job of showing the chickens in the way I wanted to show them.”

For her latest book, Staples traveled in a van outfitted with a small version of an Olan Mills-style portrait studio in the back, complete with interchangeable backdrops and glamor lighting. She shot at 10 shows across the Northeast and in Ohio, shooting about 25 birds per show, trying to capture their distinct personalities.

Birds are difficult to photograph. They scratch. They’re easily distracted, and they’re bound to poop on a set. Despite the challenges, Staples captured each bird looking straight into her camera—something she’s very proud of.

There was never one breed or one type of bird that made good pictures, she says. “I don’t really have a favorite breed,” she adds. “It’s more of an individual bird’s presence or a pose than the type of bird.”

She remembers one older bird, an Ameraucana, who stood tall and straight despite his messy feathers. “He was a little bit tattered,” she says. “But he posed in such a way that you can tell he’s a thoroughbred.”

Staples, who is based in Brooklyn, is looking forward to her homecoming and to introducing Athens to her world of feathery models.

“I wish everyone could know a chicken,” she says. “They’re great creatures. They really are.”