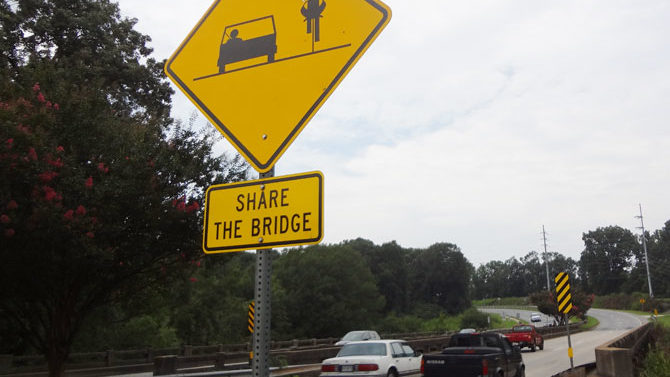 The biggest open question on the long-awaited project:  should bike lanes be four feet wide or five?  Most citizens, and BikeAthens, favored the wider lanes.  “Let’s do it right,” one citizen commented, saying even five-foot lanes are “barely adequate” on the busy road.

College Station already has bicycle lanes from the University of Georgia campus to a narrow river bridge, forcing cyclists to merge with traffic to cross.  They pick up again after the bridge before petering out at Research Drive.

Bike lanes will be added all the way to Barnett Shoals Road (probably during 2015) just as Georgia’s Department of Transportation is replacing the narrow bridge with a wider one (likely by 2016) that will have room for bike lanes and sidewalks, ACC Transportation Administrator Jerry Oberholtzer tells Flagpole.

Both projects are expensive and extensive, and both have been priorities for local bicyclists and their supporters in local government for years.  The old river bridges are “functionally obsolete,” Oberholtzer says, and cannot be widened. Replacing them will take two years.

To add bike lanes and consistent sidewalks to the eastern end of College Station will require moving the centerline and repaving the road, although the additional right-of-way width required will be no more than 10 feet, he says.

Narrower bike lanes would “greatly reduce the construction cost” by 16 percent on the $1.9 million project, according to a county handout.  But BikeAthens Executive Director Tyler Dewey says four-foot widths are narrower than standard.

At least one more public meeting will be held on the design, and it will go to ACC commissioners for a final vote.

UGA, too, is planning to better accommodate bicyclists in future years, says Kevin Kirsche of UGA’s Office of Sustainability.  “The current priority is Sanford Drive”—the major north-south route through campus—which could get bike lanes, “bike boxes” where bicyclists can wait at stoplights and be seen more easily, and semi-separated bike lanes.  Proposals by UGA’s Grounds Department and a BikeUGA Task Force will be vetted with an eye to current funding, Kirsche says, and “actual improvements along a portion of Sanford Drive should be completed by next summer.”

Last year’s UGA Bike Study made extensive suggestions for facilitating bike movements on various campus streets and intersections, including allowing bikes to continue through red lights at some intersections, widening some streets, eliminating some parking and changing bus bays.  Sanford Drive should be a priority, the study said, followed by bike-friendly improvements at intersections, and adding missing bike lanes along East Campus Road, Carlton Street, and River Road.