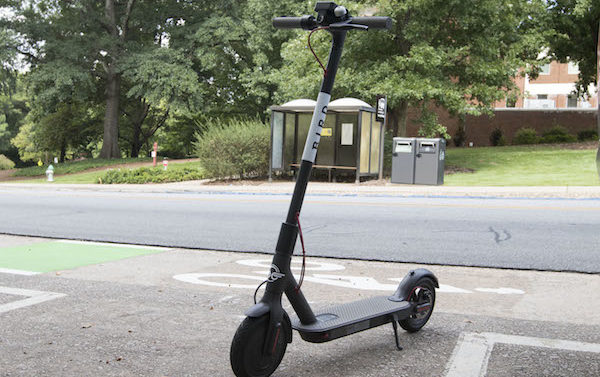 Having just extended a temporary ban on “shareable dockless mobility devices”—mainly scooters rented via phone apps—Athens-Clarke County commissioners seemed less than enthusiastic last week about allowing them at all. “I’ve heard from no one who wants these shareable scooters to come back,” Commissioner Russell Edwards observed at an Oct. 8 work session.

Last year, Bird e-scooters appeared all over downtown and at UGA. Based on safety issues, including scooters blocking or being illegally ridden on sidewalks, UGA confiscated over 1,000 scooters from campus—Bird eventually settled its fines and took them back—and ACC asked Bird to remove the rest, which it did. The ban does not affect scooters owned by individuals.

Bringing the scooters back would be “a very complex issue with a lot of moving parts,” ACC assistant attorney Sherrie Hines told commissioners. The scooter companies, having no local office, leave responsibility with riders and, by default, county government for safety, enforcement and liability, while collecting a per-minute charge to ride. “There’s just a whole lot of risk for the users,” Hines said; riders cannot signal turns while riding, which requires both hands, and must assume the vehicles are safely maintained. Riding on sidewalks is illegal, and riding on streets can be dangerous. UGA will not likely allow them on campus, Hines said, unless state legislation now being developed forces it to. If ACC does allow them, she suggested hiring a consultant to advise the local government on setting fees to recover costs from the scooter companies for constructing scooter parking downtown, and for enforcement and oversight costs.

TADs have long been discussed by local government wonks as funding devices to provide amenities to specific geographic areas. The first TADs have now been proposed for two areas of Athens: Newton Bridge Road and adjacent areas, and a vaguely defined “river district” east of downtown. Properties within a TAD whose assessments increase would have the additional tax money spent only within the TAD area, rather than throughout the county, for the next 20 years. The money could go to any capital infrastructure: trails, sewer lines, parks, even buses.

Development is already increasing in the two areas, which makes them attractive as TADs. Both areas have higher-than-average joblessness and poverty rates, which might be helped by TAD investments. New amenities could speed up private development, too. But for a TAD to be successful, the Clarke County School District would need to buy in, consulting attorney Dan McRae told commissioners—even though the district would miss out on the additional taxes during the period of the TAD. McRae and ACC Manager Blaine Williams briefed the school board on TADs earlier this month.

Why not a TAD for North Athens, asked Commissioner Ovita Thornton—the North Avenue area, which needs investment worse? “North Athens should be standing out like a rock star when you’re talking about a TAD,” she said, citing homeless people and an abandoned Big Lots store that’s “become a dump.”

Commissioners also had questions—some of them pointed—for ACC elections director Charlotte Sosebee. Why was no place provided last year on the Eastside for early voting, and why was a meeting on the subject closed to the public? Sosebee, who has been in the job for three years, said she had not had enough staff for a fourth early voting location, but this year she will hold early voting at the tennis center in Southeast Clarke Park, a location that was criticized by some commissioners as not being easily accessible by bus.

“I asked the board to go into executive session because I thought the process could have been handled a little better,” Sosebee explained. “I didn’t want to embarrass anybody. I didn’t want to embarrass myself.” State law requires such meetings to be open to the public with few exceptions, like personnel matters and real estate purchases. She said the board is in the process of adopting written bylaws.

In August, the AJC reported a voting machine anomaly in Winterville during last November’s election: “On machine No. 3, Republicans won every race. On each of the other six machines in that precinct, Democrats won every race…” Sosebee told commissioners that the first sentence of that report was correct; the second was not. She and her staff checked out the machines—which have been quarantined pending a check by the Secretary of State’s office and will not be used this November—but found no problems.

Edwards asked Sosebee to explain her earlier comments, published in Flagpole, that had given “heartburn” to a number of his constituents—she had said “two hours [waiting to vote] shouldn’t have turned people away.”

“I apologize, because that sounds very insensitive,” she said in response. But she personally felt, she went on, that “if I can sit two hours to wait to be seated at Pappadeaux [a restaurant], I can spend two hours on line for voting.”

The railroad trestle that loomed high over Trail Creek near Dudley Park, behind Mama’s Boy, became an Athens landmark when it appeared, kudzu-choked, on the back cover of R.E.M.’s 1983 Murmur album. The trestle was abandoned and then partially disassembled by the railroad, but trail advocates hoped to restore it as an elevated bike/pedestrian trail from downtown. Engineers disagreed: The trestle was too dilapidated to repair, and its future has been a question mark.

Now, with $3.2 million in funding from the new transportation sales tax, plans are coming into focus to incorporate parts of the old trestle into a high bridge as part of the Firefly Trail to Winterville and eventually beyond. Over 100 written public comments responded to several proposed designs. Commissioners will approve a final design in November, and the trail bridge could be finished by spring of 2021.