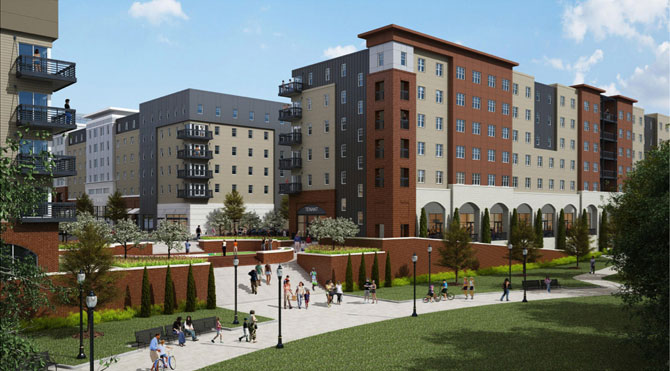 “It meets zoning requirements,” ACC planning director Brad Griffin told commissioners, but the county’s greenway coordinator has raised questions about how  access will be provided from Oconee Street to the county’s long-planned but unbuilt rail-trail from downtown out to Winterville Road, and perhaps eventually to points farther south.

The “Firefly” rail-trail will proceed, but developers are supposed to provide an access spur from Oconee Street.  In a memo, Greenway Coordinator Mel Cochran raised questions about the developers’ proposal: “If the bike lanes, plaza and ramp are an attempt to provide that access, there are a number of safety concerns that would make that route unsafe for Greenway users.” She suggested that a wider off-road path might substitute for the two bike lanes, and that the “blank walls at eye level along the entire trail corridor” need to be broken up visually.

ACC Commissioner Jerry NeSmith questioned whether Selig’s plan can even meet the county’s requirements, insisting that “nobody’s going to ride their bike up that ramp.” But Griffin and County Attorney Bill Berryman said they could work out assurances that the developer would come back and build a suitably level trail access whenever the future trail gets built. The grading question will be on the commission’s agenda for an August vote, but its approval is not required for Selig to go forward, Griffin told Flagpole.

Although critics have suggested that ACC has set aside an old railbed through the property for a Firefly Trail-Oconee Street connection in the legally binding Transportation Corridor Concept Map, county planners contend that the connection doesn’t have to follow that exact route, and Selig’s proposal meets the intent of the map.

Approval of the plan looks likely. Selig is asking only for an exemption to allow ground-floor apartments (rather than retail shops) along Wilkerson Street at the foot of the hill, and by granting that, commissioners will gain assurance that the binding site plan will be followed. Otherwise, the developer could build even more apartments on the site. For the same reason, but with some reservations, the advisory planning commission approved the proposal unanimously.

No public input was taken on the proposal last week, but citizens can have their say before the commission vote on July 2. At earlier meetings, citizens have criticized the proposal as out-of-scale and autocentric.

Neither a controversial Wal-Mart nor any big-box retailer will be part of the $90 million Selig project, which will fill nine acres between downtown and the Oconee river, and neither will a hoped-for grocery store.

No grocery store will be included, the developer’s website says, because “grocery stores operate on slim profit margins” and cannot support the costs of parking decks; and “during the past year, one new grocery store has opened in Athens, another has completed a significant expansion, and another is planned in northeast Athens.” That statement seems to be referring to the Fresh Market on Alps Road, the Alps Road Kroger and another Kroger that will be built on Highway 29.

The extensive project of five-to-six-story apartment towers will be built along Oconee and East Broad streets, marching downhill to the river.  They will also face a new public street, required by the county, that will bend from midway down the hill on Oconee street around to East Broad.  Ground-floor shops will line all the streets, with 375 new apartments filling the upper stories.  Parking decks built into the apartment towers will barely be visible. Angled street parking (possibly “reverse-angled” parking slots that drivers must back into, making them safer to exit) will line both sides of the new Hickory Street.

Construction could start this fall and finish in 2015. All present structures on the old Armstrong & Dobbs lumberyard and adjacent properties (including the funkily adapted Jittery Joe’s Roasting Co. on East Broad) will be demolished to build the complex.

The development fulfills earlier predictions by a consultant that, unless the county made other plans for the land between downtown and the river, “the opportunity to develop the riverfront as a major employment center is lost if these 16 critical acres are converted to more student housing.”

The “Blue Heron” river district proposed by the Economic Development Foundation in 2011 would have required the county to borrow $25 million for land and buildings even beyond the Selig site. It envisioned a hotel, research park, offices, retail space and an amphitheater. But local government officials lacked enthusiasm for such a speculative plan at a time when tax revenues were down and budgets were being cut.