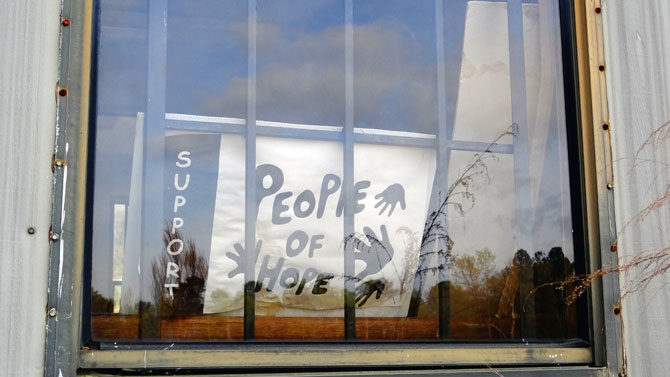 A $5,000 pile of dirt appears to be the final obstacle that the People of Hope could not overcome.

After more than a decade of fundraising, permitting and wrangling with a neighboring property owner, work on the resident-owned trailer park ended earlier this year when the group could not pay a contractor for fill dirt needed to finish a sewer lift station, according to a consultant who’s worked on the project.

“Basically, the contractors have pulled off the job,” says Ken Beall, the landscape architect who did land planning for the 18 acres off Freeman Drive. “It’s more or less an abandoned project.”

People of Hope started in 2002, as residents of Garden Springs mobile home park were forced to move from the North Avenue site to make way for student apartments. While some of the families owned their own trailers, many of the homes were too old to move, so the families were forced onto the streets.

A coalition of church members, Hispanic support groups and affordable housing advocates banded together to find them places to go. Once the immediate problem was solved, they turned to finding a permanent solution.

“We found places for people anywhere we could. People opened up their own houses, their basements,” says Valerie Aldridge, one of the volunteers who helped find temporary housing and then raise money for a new neighborhood.

“Everybody thought, ‘We need to have a place that people can go when this happens again—a self-managed community,’ ” Aldridge says.

That seed of an idea grew into a plan for a resident-owned mobile home park where the neighbors would collectively own the land under their homes, ensuring that development could never force them to move.

The group found and bought land in 2004, but faced challenge after challenge to build there. The land had to be rezoned to allow for mobile homes—a change that the planning commission frowned on because it went against the land use plan. The 41 lots needed their own sewer line and pump station—infrastructure that the county had never approved for a multi-family development. Then, they landed in court with their neighbor over the pump station.

Along the way, money and focus were always issues. While a charity called the Georgia Community Loan Fund worked to raise $1.3 million to build the park, People of Hope also had to try to keep up with former Garden Springs residents, many of whom moved on. “They just came across so many obstacles,” Aldridge says. “Everybody gave a lot of time, money and effort to make it work. It just got so complicated.”

The funding included $377,500 in federal housing grants—$175,000 in HOME funds and the rest in Community Development Block Grants—as well as $150,000 from the Presbyterian Church (USA) and tens of thousands of dollars in smaller donations from local businesses, churches and individuals.

After two failed attempts, the group also received a $446,443 grant from the Affordable Housing Program of the Federal Home Loan Bank, according to the Athens-Clarke Human and Economic Development Department. (It is unclear if the group ever spent this money. Calls and emails to the official People of Hope agent, the attorney and a long-time board member were not returned.)

The site has been cleared and graded; a detention pond was built. The sewer line is nearly finished. But the only sign that the property at 225 Freeman Drive belongs to the People of Hope is a vandalized construction trailer—the building that the group dedicated in 2007 as a temporary community center. The windows are shattered, though one still has a People of Hope poster taped to the broken glass.

The People of Hope long ago missed deadlines complete the project, and now the Athens-Clarke County government has to give up HOME money for affordable housing projects in 2014 to pay back the feds. “The project wasn’t finished and HUD wants its money back or to see a finished product,” says ACC Commissioner Mike Hamby. “So do I.” He’s not sure whether county leaders will push People of Hope to sell the land to a developer.

The area already has lots of duplexes and small homes. The neighbor, Steven Hill, says he is close to a deal with investors that would allow him to continue with a residential project next door.

The infrastructure on the People of Hope property would support other affordable housing projects, Beall says. “I’ve had this thought on several occasions,” he says. “That would be the easiest adaptive reuse.”