There is a place not far from here with a rich and colorful history. I’m talking about one of those truly Southern Places, shaped by Native American, African and European influences. This place sits in a complex ecosystem alongside a major river that once fed a good-sized little town, a successful textile industry, agriculture, the exchanges of commerce and a decidedly unique public citizenry. 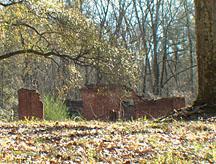 Not much is left of Scull Shoals, once a bustling community.

Not very long ago, a major flood put the whole place under water and forced its inhabitants to evacuate. They had endured floods and various other natural catastrophes many times before, but this time the waters had a different look to them. Menacing and powerful, the river rose up as if God – or maybe some other force – was at last dealing a death blow. When the floodwaters finally receded, they revealed unspeakable images. Homes had crumpled and collapsed underwater. The town’s toll bridge had been set loose, and was now floating downstream. Silt and mud covered everything. Valuable dry goods were washed away or ruined entirely. Even the most optimistic eyes could see that the river, which once fed the town, had at last destroyed its tenuous bargain with existence.

What was left was the ghost of a community that once thrived and the wreckage of lives touched by nature’s capacity for destruction. Not long after the flood, the last inhabitant of Scull Shoals, pop. 600, moved on down the line, and the town’s ruins slipped into oblivion… almost. 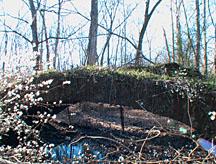 The flood that signaled the end of Scull Shoals (one of many signals, it would turn out) happened way back in 1887, roughly 100 years after the town was founded.

Following that flood, Scull Shoals never flourished again. The site’s dual reputation – as a robust center of agriculture and industry, yet also as an easy mark for floods, drought and economic peril – made it a kind of real estate hot potato for some years to come. Ownership of the town changed hands several times as different investors hatched varied, ill-fated schemes to breathe new life into the place. None of them were very successful, and finally, in 1949, the geographically isolated ruins of Scull Shoals became part of the Oconee National Forest. It is here, in a swath of protected woodlands 15 miles south of Athens, that present-day visitors can now stand on the banks of the Oconee and explore one of Georgia’s few remaining ghost towns.

Now, for a lot of people, the phrase “ghost town” might elicit a long-stored memory of the “Ghost Town, U.S.A.” episode of “The Brady Bunch.” This is the episode when that shifty old prospector tricked and trapped the entire Brady clan in an old-timey jail cell. This was bad enough. The fact that the jail sat smack-dab in the middle of a deserted ghost town made things considerably worse. Just how in the hell all this transpired, I do not quite recall. But I remember how they escaped: Mike fashioned a lasso out of a bunch of belts and managed to wrangle the key to the cell, which the demented prospector had neglectfully left within wrangle-distance. This McGuyver-like stroke of genius on Mike’s part saved the entire family from an inevitable Donner Party-like demise. It’s safe to say that the event was the closest brush with collective annihilation the Brady Family ever experienced. Whether or not the Bradys learned anything from their dance with death I cannot say. (Though subsequent episodes tend to suggest that they repressed any memories of the traumatic event.) But if any real-life moral could be abstracted from this episode, it’s that sometimes escape is the only option. Either that or stick around and die a slow and painful death. Like Kenny Rogers once crooned, “You gotta know when to hold ‘em, know when to fold ‘em.” Damn straight. Just ask anyone who’s had to pick up and leave her hometown because the water’s six feet high and rising. 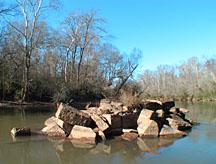 The Oconee looks peaceful here, but it can turn into a raging torrent.

Scull Shoals, The Ghost Town, is of course, nothing at all like this or any of the other popular ghost town images we’ve all seen a thousand times. This is an important point, because real life has a way of smashing our illusions about it. Quite often, that smashing is served with a side order of disappointment. So let me be up-front about this: There is no dirty, dusty Main Street, no Old West cantina with swinging doors, and nary a tumbleweed to be found at Scull Shoals. The chances of being held captive in a jail cell by an eccentric lone inhabitant are nonexistent, given that there is no jail left standing at Scull Shoals. In fact, the only standing structures are the crumbling brick walls of the town’s warehouse and an old arched bridge at the edge of the forest. That these structures are still standing at all is a near-miracle, likely owed to the protection and obscurity afforded by the Oconee National Forest. It’s this protection and obscurity that has also kept Scull Shoals out of sight and mind from most folks, except for a handful of locals. Finally, there are no “skulls” at Scull Shoals… well, not any visible ones anyway.

As for the origin of the town’s name, well, that’s a bit of a mystery. There are a number of theories circulating about this, including a popular suggestion that the name might be a misspelled reference to the remains of a well-documented Native American presence in the area. Two Lamar Indian mounds dating back to 1250 A.D. lie not far from the ghost town, and bands of Muscogee Creeks are known to have settled the area before European settlers arrived with slave labor to grow cotton and other crops from the good dirt of the newly-deforested lands. The Creeks led raids against the new inhabitants of Scull Shoals, who were doubtlessly regarded as alien invaders. There was bloodshed on both sides. The “skull” of Scull Shoals, it has been suspected, may be a grim nod to the spent lives of natives and European settlers who, once upon a time, clashed here on the muddy banks of the Oconee. Most likely, though, “Scull” is either a family name, or a reference to the oars or “sculls” used to power a small river skiff.

Now that I’ve stripped Scull Shoals of its more sensational trappings, you might be wondering why anyone, besides the odd archaeologist or history buff, would ever even want to visit the place. Let me explain. 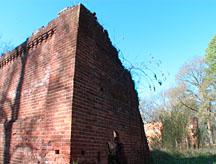 Imagine that you’re standing there on the banks of the Oconee River. It’s a mild, overcast Sunday afternoon in mid-December. Barren hardwoods huddle together, their leafless branches reaching skyward. A shallow stream of chocolate-brown river water works its way through the shoals, lapping at the muddy banks. An old pier, broken down by nature and time, rises up out of the water. It’s one of the piers that supported the old covered bridge that was sent downstream in the flood of 1887. A couple hundred yards east of the river, the ruins sit silent. Weeds and bramble twine around the brick pillars of the old company store and warehouse. A dense moss bed blankets the old arched bridge, a bridge that once provided passage for a townspeople that have long gone. Now you pick up a smooth river stone and skip it into the Oconee. Or maybe you say “Hey, there” to the middle-aged man who just pulled up in his pickup truck and is now casting a line into the river. “You fishin’ for catfish?” you ask him. “Catfish, bream, whatever I can catch, man,” he’ll say, slowly reeling in his line. Somewhere, off in the distance, you hear the plaintive cry of a rain crow.

Now, if that’s not about as far as you can get from Mike Brady, suburban sprawl and anything else that’s fabricated and unnatural, then I don’t know what is. And, naturally, that’s why Scull Shoals has value and significance. The place is real. If you spend a little time there, you can actually get a break from these worrisome modern times. You can forget, for example, that Atlanta is bristling and sprawling 45 minutes away (and getting closer every year), or that we live in a troubled nation that, at its worst, worships only wealth, youth, “progress” and “improvement.” Buggy, remote and deserted, Scull Shoals is no Disneyland… which is my point exactly. It doesn’t sell illusions: it smashes them.

Here, in one of the last sanctified remnants of the Piedmont, it’s possible to cut loose from the sensory overload imposed on us by the world we’ve built up and filled with cars, buildings, roads and power lines. You can re-calibrate here, unwind and start to feel like a natural human being again. Who knows? You might decide to get outside more often and unplug yourself from the usual set of predictable distractions. Hell, you might even get curious about the real, natural world, what it’s been through, and where we’re all headed. If you don’t, that’s okay, too. It’s surely not necessary to wax philosophical about that place in the woods. It’s enough just to go there, see it and be quiet for awhile.

Of course, we can all sit and observe nature just about anywhere. Scull Shoals offers something extra, though: those ruins. Beautiful and crumbling, the ruins at Scull Shoals serve as a fitting memorial to the town’s citizenry, right down to the inhabitants forced to abandon their homes in the rising floodwaters of 1887. From this vantage point here by the river, it’s easy to see that Scull Shoals – the ghost town, the historic site, and the place of ruins – is a monument to anyone who has had to pick up and move on down the line because of the simple facts of existence.

To get there, head south on Georgia Highway 15, out of Watkinsville. In about 12 miles, after you cross the Oconee River, look for Macedonia Road off to the left. Turn here. In two miles you’ll see Forest Service Road 1234 on your left. Turn here and stay straight for about three miles. This road will take you directly to the gravel parking lot at Scull Shoals.

The Political Year In Review

Come Get You a Piece