The Political Year In Review

The political year began in January with State Senator Ralph Hudgens’ introduction of a bill to redraw Senatorial districts 46 and 47, splitting Athens-Clarke County in two, with a part in each district. His Republican colleagues in the House and Senate and the Governor’s office quickly passed and signed the bill into law despite their professed distaste for splitting communities of interest for political purposes. Sen. Hudgens’ law would prove decisive in the District 46 contest between Republican Bill Cowsert and Democrat Jane Kidd, with Cowsert winning the seat with the heavily Republican part of Walton County added to the district, while losing two-to-one to Kidd in Athens-Clarke County, where they both live. Hudgens himself went on to win easily in the new District 47, where he ran as the incumbent against political newcomer Mac Rawson. By winning in District 46, Cowsert replaced his brother-in-law, Sen. Brian Kemp, who ran for Georgia Commissioner of Agriculture but was defeated in the Republican Primary by Gary Black, a Jackson County farmer and lobbyist. Even though Kemp was not successful, his brother-in-law kept the District 46 seat in the family.

The Republican-dominated Georgia legislature and Governor Perdue, after cutting $1.2 billion dollars from the education budget over the last three years, put $800 million back in the budget, this being an election year and all.

Gas prices got really high for a while in 2006, and then they went down, just in time for the midterm Congressional elections. Some people thought that was weird.

Assessing the legislative session, Flagpole Capitol corespondent Tom Crawford summed up by pointing out that the state was falling behind in education with one of the highest dropout rates in the country and last place in SAT scores; the state was squeezing money from the rural counties and losing good jobs with the closings of plants like Ford and General Motors, while the state’s population was sicker but had less health insurance. The Governor and the legislature did not address these problems, but concentrated instead on legislation to make it illegal for schools to prohibit “Merry Christmas,” authorized local governments to post the Ten Commandments in city halls and courthouses, approved Bible studies in high schools and blew the whistle on high school clubs for gays. Democrats in the legislature beat back a measure that would have mandated state stream buffers at 25 feet, superseding local ordinances like Athens-Clarke’s that extend buffers to 75 feet and also defeated a measure that would have allowed another trans-state Georgia Natural Gas pipeline to be paid for by home heating customers.

In May, Rep. Jane Kidd filed a lawsuit challenging the redistricting of Senate District 46, for which she was a candidate, but after twisting through the courts for months, it finally came to nought. The Democratic Primary gubernatorial campaign between Lt. Governor Mark Taylor and Secretary of State Cathy Cox turned uglier as Cox’s campaign manager resigned after admitting to doctoring a reference to Taylor in the online encyclopedia Wikipedia (ah, modern campaigning!).

In May, a State Superior Court Judge in Atlanta ruled the Georgia amendment against gay marriage unconstitutional. Gov. Perdue threatened a special session of the legislature to re-write the amendment and put it back on the ballot if the judge’s ruling was upheld. Both Taylor and Cox supported that idea, currying favor with what they and the Governor saw as the state’s homophobic voters. The issue was eventually rendered moot and off the ballot by a later Georgia Supreme Court decision, but it cost both Taylor and Cox support (which Perdue had already lost) from gay voters and their friends. 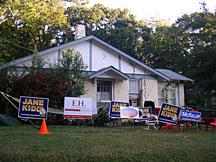 Some won and some lost in the end, but in the brief camaraderie that followed October episodes of indiscriminate yard-sign theft, all the candidates were equal.

In Commission District 3, pastor Deborah Walker-Lucas signed up to run against incumbent Commissioner George Maxwell, but she was ruled ineligible because of the location of her residence. 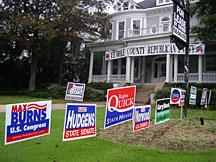 Only in an election year could the yard across the street from The Grit look like this.

The advent of non-partisan Mayor and Commission races created a somewhat confusing political landscape for local voters. Statewide, in the Republican and Democratic Primaries, there were contested elections for Governor, Lt. Governor, Secretary of State and other state offices. Locally, there happened to be no Republican or Democratic Party Primary contests for the State Senate or the State House of Representatives or any judgeships. So, on the local level, there was only one contested race in the July 18 Democratic Primary and none in the Republican Primary. All other local races would be voted on in the Nov. 7 General Election.

In the sole local Democratic Primary race, three attorneys – C.R. Chisholm, Bill Overend and Brian Patterson – vied for the position of Solicitor General, the prosecutor in State Court, a local court of lesser jurisdiction than the Superior Court, where the District Attorney is the prosecutor.

Chisholm came in ahead of the other two, but was in a runoff with Overend, who finished 798 votes behind the frontrunner. In the runoff election, Overend almost accomplished the impossible but lost by 33 votes to Chisholm.

Because there was a less than one-percent margin, there was a recount, which confirmed not only the vote, but also the suspicion that in this era of paperless touch-screen voting machines, a recount simply means putting the same vote-tallying cards back into the same machines and getting the same result. No more hanging chads, but, effectively, no more recounts, either.

On the state level, in the Democratic Primary race for Governor, Mark Taylor defeated Cathy Cox and, because of their ugly campaign, himself. In the General Election, he proved no match for Gov. Sonny Perdue and was less than popular among many Democrats. Perhaps more significantly, Sen. Casey Cagle handily defeated former Christian Coalition head Ralph Reed in the Republican Primary for Lt. Governor, after a summer of newspaper stories about Reed’s ties to convicted Washington über-lobbyist Jack Abramoff. Greg Hecht and Jim Martin went into a runoff in the Democratic Lt. Governor’s race, which Martin eventually won. Brian Kemp lost to Gary Black in the Republican Primary race for Commissioner of Agriculture. 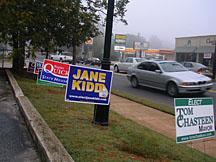 Aren’t you glad all those signs (well, most of ’em) have gone away?

Meanwhile, on the local level, Charlie Maddox emerged as a serious challenger to Mayor Davison, while Tom Chasteen’s campaign had trouble gaining traction, Richard DeRose was essentially a one-issue candidate (the dangers of biocontainment) and Andy Rusk (the “No Bullshit Candidate”) was driving back and forth to Atlanta to work every day, leaving him little time to campaign. Maddox put together a coalition of black voters, conservative Republicans and citizens disaffected with Mayor Davison. Maddox was vague on issues but strong on charm and involvement in community activities. Rusk later withdrew in favor of Davison in a dramatic, surprise announcement at the conclusion of a mayoral debate sponsored by the Athens Press Club at The Melting Point in downtown Athens.

After another month of campaigning, in the Dec. 5 Runoff Election, Davison defeated Maddox 55 percent to 45 percent and Kelly Girtz polled 59 percent to defeat Alvin Sheats.

The political year wound to a close with what appeared to be a solidly progressive Mayor and Commission here in Athens-Clarke County surrounded by a sea of conservative Republicans. Out beyond the South, however, the 2006 General Election returned both houses of Congress to the Democrats.

On Dec. 1, former Athens City Councilwoman and former Athens-Clarke County Commissioner Miriam Moore died, marking an era during which African Americans fought their way into participation as elected officials in local government. Her funeral was a celebration of her life and came the day after Charlie Maddox polled 45 percent of the vote in the hard-fought mayoral election, showing that the legacy of Ms. Moore and her compatriots lives on in Athens.