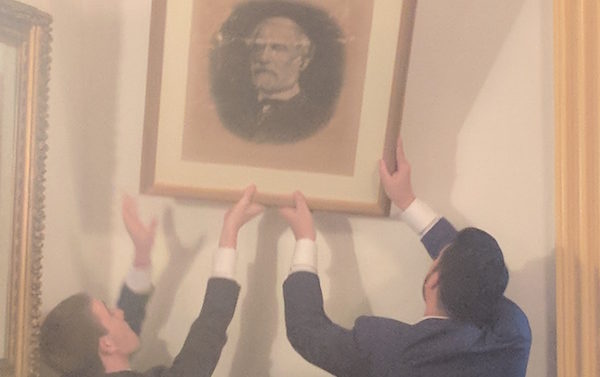 Members of the Demosthenian Society take down a portrait of Robert E. Lee after debating whether to remove it.

The national discussion over Confederate monuments and memorials reached the floor of the Demosthenian Literary Society Thursday night, as the organization debated whether to remove a portrait of Robert E. Lee that hangs in its chamber.

A portrait of Lee has been in the chamber for several decades. Although some members estimate the portrait was hung up in the 1910s, the portrait itself is likely dated between 1875 and World War I, Head said.

Lee is one of three honorary members whose images hang in the society’s chamber. Emma Goldman, a 20th Century anarchist, and Martin Luther King Jr. are the other two.

“I especially like the dichotomy here,” Head said, pointing out King and Lee’s portraits on opposing walls of the chamber.

Over a nearly hour of debate, several society members and guests took to the podium. Most of them were in favor of taking the portrait down.

“This debate is not about the other portraits,” said society historian Warren Furman Smith. “This is about a single goal: To say unequivocally, with one voice, that Robert E. Lee does not belong in this hall.”

Smith brought the resolution to the floor in the wake of the recent violence in Charlottesville, VA, but the idea was a long time coming. The society wanted to debate the removal following the shooting at an African-American Charleston, SC church last year, but other debates and topics delayed the resolution.

“My family is from the South. They served in the South Carolina regiment,” Smith told Flagpole. Seeing the debate over the Confederate flag last year, Smith wanted to be proactive in removing Lee’s portrait, and brought the resolution back after Charlottesville.

Reed Hennessy said the portrait was put up during a different time, and the world has changed since 1880.

“The personal views of those who put him up there was a message that we do not welcome here,” he said.

Usha Rahn, a historian and member of the society, said she did not want the organization associated with the Confederacy.

“I am a fan of remembering our history, the ugly and the beautiful,” she said. “But I am not a fan of this society appearing as a supporter of General Lee and the Confederacy.”

Most of the speeches came from white members and guests. One of the most powerful speeches of the night came from Cerille Nassau, an African-American society member in the late 1980s.

“I was shocked to find out the first African Americans joined this society in 1983,” he said.

The Demosthenians are currently led by their first black female president, Alanna Pierce.

To Nassau, Lee’s portrait represents division and oppression, and it is unwelcoming to new members.

“There is a stigma attached to these societies, that [African-American students] won’t feel welcome, and certainly having someone like [Lee] in the sanctimonious area is not going to make them feel welcome,” he said.

After roughly an hour of debate, the society voted unanimously to remove the portrait. Following custom, members took the portrait down immediately following the vote. The society is looking to donate it to the University Archives, Smith told Flagpole.

Head spoke at the podium after the vote, saying he had concerns about what the motion means for the future.

“I worry about what precedent this may set for future societies,” he said, possibly leading to other portraits being found objectionable and coming down later.

Head was also saddened that the Martin Luther King, Jr. portrait no longer had a counterpart.

“We no longer have a graphic depiction of where were are and how far we’ve come,” he said.

A portrait of diplomat Lynne Tracy will probably take Lee’s place on the wall, Nolan Hendricks, the former president of the society, told Flagpole.

Rep. Chuck Williams May Be Stepping Down, Too