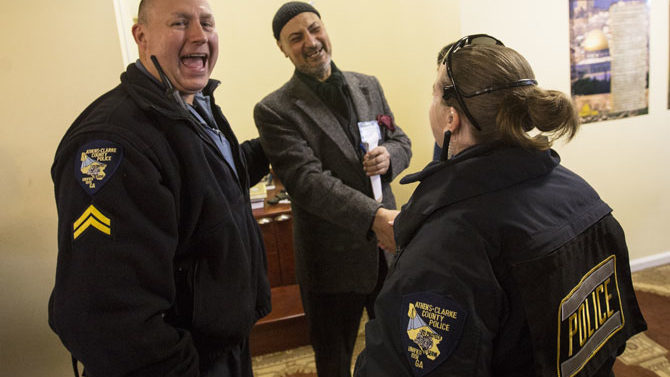 “The timing is so crucial to give people a window to know about Islam,” said imam Adel Amer. “Actually the problem is with ignorance, we have to fight ignorance, and you won’t be able to form or crystalize an opinion about someone without reading about him, so instead of hearing about us you’re going to hear from us. Because when you hear about us… the whole portrait will be the same color, or throw all the Muslims in the same basket, and that is not necessarily true. We have bad people, we have crazy people, like everybody else. But this is not the norm.”

An open house last January drew about 600 people, and Amer is expecting a drastic upswing in attendance this year.

Al-Huda has been working to reach out to other faiths because of today’s trying social and political climate. Amer said that the mosque’s Thanksgiving service was the first he knew of to include readings from not only the Quran, but the Torah and the Bible as well, with the focus on the common and unifying themes among the texts.

Amer stressed the need for unity: “We have a beautiful community called Athens, and we are a fabric of Athens, which is part of the fabric of the United States of America. We’re no strangers, we’re no outsiders, and all of us need to get together. This masjid, this mosque, is not only for Muslims. It’s for every American who wants to learn about Islam, which is the word of peace that Jesus came with, which is the word of love that Moses came with, which is the spirit of togetherness for the father of the prophets, Abraham. Peace of God be upon all of them.”

Amer said that the open house, which will feature henna, meet-and-greets, Quran readings and more, is “one of the most important events at Al-Huda.” He will also use the day to announce beginner-level Arabic classes starting later this month. They will be free, meet once a week and be open to the public, he said.

Occupying Airports and the Future of Protest