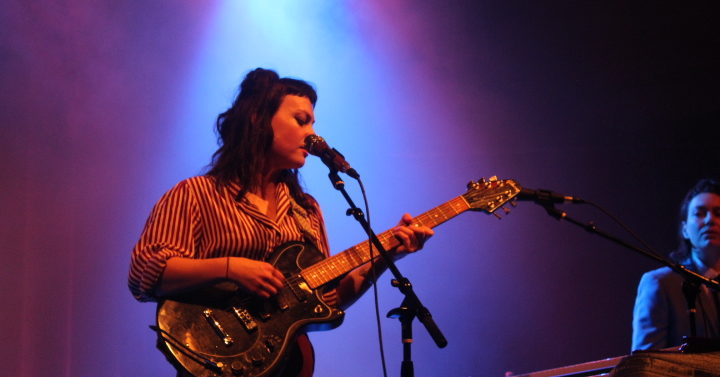 “What day is it?” Angel Olsen asked her audience. “What did the groundhog do?” She was pseudo-miffed to learn both answers. Olsen brought together charming levity and acute focus at the Georgia Theatre Thursday night.

Olsen’s music drips with emotional intelligence and intensity. Though many of her songs exude intense brooding and longing, her performance Thursday was a celebration of these complications, rather than a mere cathartic outpouring.

Her voice has grown in power and quality since her 2010 debut, Strange Cacti, taking on a full-throated, silvery sheen supported by her already-honed spinny, timeless vibrato.

The night’s standouts included the rocllicking and jaunty “Give It Up,” a stripped-down synth version of “Intern” and the sultry and self-aware “Heart Shaped Face”—all from her most recent and most celebrated album, My Woman.

Olsen is adept at starting small, expanding her songs into a fizzy sprawl with a directness and simplicity that demands not to only be heard, but felt. This format was felt most fully with “Sister” and “Woman,” My Woman‘s centerpiece and penultimate track, respectively.

“Everything’s fine,” Olsen drawled through a tapered grin. “Call your local representative. Everything’s fine.” She then eased into the night’s most disarming and direct moment as she began to play “Lights Out,” a highlight from her 2014 LP, Burn Your Fire for No Witness.

“If you feel like quitting now, then try a little harder,” she sang. “The things we need the most, they seem to take a little longer.” Her words were unavoidably overcast considering our present national politics, and they morphed into a survival mantra for the next four years.

While she’s not an expressly political artist, Olsen seemed to be calling on her audience to remain steady in confronting today’s issues. “If you feel like running out, then stand in one place,” she continued. “When you’re still and when you run, there’s something to face.”