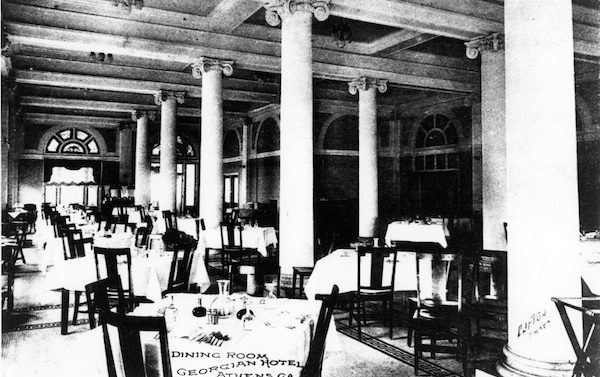 The new owners of the once-famed “Pride of Athens,” the ballroom at The Georgian, showed off their plans to restore it at an Athens-Clarke Heritage Foundation event on Monday.

South Kitchen + Bar owners Kirby and Stephanie Sims, who also own Trappeze Pub and Highwire, are buying the ballroom from Chris Blackmon, owner of Rent Athens, another business in the building.

Several hundred Athens-Clarke Heritage Foundation members filled the ballroom Monday, the more curious wandering through the halls and unused rooms of the former Palm Room, which has been sectioned off from the ballroom.

The Georgian, built as Athens’ first hotel, has undergone many phases in its 108-year life. Its run as a luxury hotel was ended in 1975 by the rise of low-cost highway motels. The five-story building changed hands several times over the next few decades, being utilized as commercial offices, condos, shops, the Rotary Club and the fondly remembered Friends Restaurant, among other uses.

Many of the attendees have memories of the building. Carl Parks lived in the hotel for a month in 1975 while attending law school at night. (He said he was too studious to enjoy the ballroom.) Dick Field was in the Army when he stayed in the hotel for a week late in 1969 with his wife while visiting UGA for grad school; his son later using the ballroom for an occasion.

The ballroom has been used for events such as galas and weddings countless times, and the restoration isn’t going to stall things for long. Gay Crowe, who attended the event, said she looks forward to a family wedding Apr. 23 in the ballroom’s majestic former glory “As long we can get in here, even if we have to move some workers,” the wedding will happen, she said.

Zack Brendel of Oneta Woodworks, one of the contractors involved in the restoration, said he’s confident he’ll meet the deadline.

Brendel and the Sims’ plans for the space take historical accuracy into high regard. They said they want the restored ballroom to reflect the elegance of the Roaring Twenties.

The new plan was framed in blueprint form for guests to view. Walls breaking up the space will be removed and replaced with black walnut accordion doors, opening up the space. Marble underneath the columns will be exposed once again. Brendel expects pulling up the carpet will reveal original tile matching that in the lobby. Broken panels of glass in the half-circle windows, which will be lit from behind, will be repaired as best as possible. (There were once those same half-circle stained glass panels along the top of the northern, outside wall. According to Brendel, rumor has it they were broken in a train car explosion, although there are other stories.)

In addition, a bar will be built on the Jackson Street side of the ballroom, in the Palm Room area. It will feature brass, steel, marble and black walnut, contemporary in design but reminiscent of the Gilded Age.

The Calzone War Rages On in Athens