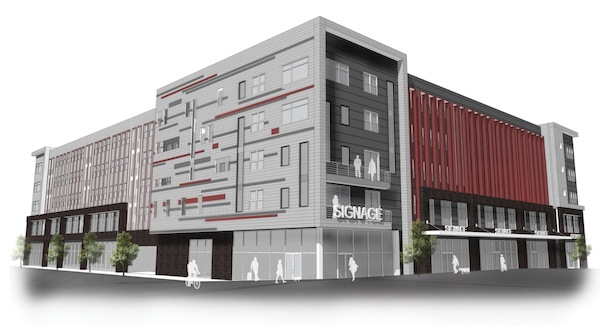 At the top of the agenda for the Athens-Clarke County Planning Commission Thursday night was a plan for more student housing.

Campus Acquisitions, a company based in Chicago, wants to turn 165 E. Dougherty St. into a five-story mixed use development with retail spaces at ground level and student apartments above. Until recently, an office building on the property housed Advantage Behavioral Health Systems, and it’s now occupied by the tech incubator Four Athens.

The biggest concern voiced by the public and the planning commission was the waiver for residential density. The plan would add 81 residential dwelling units, or 237 bedrooms, which is 27 bedrooms too many, according to the current zoning codes.

Campus Acquisitions Vice President of Investments John Diedrich said at the start of the meeting that the company has worked in Athens before—it owned and sold the apartment complex River Mill, off Stone Mill Run, in 2012—and was sensitive to the concerns of the community.

Diedrich stated his biggest concern was that some of the retail spaces might not be sustainable and may end up unoccupied. “We don’t want it to remain vacant and be a bigger eyesore for the community,” he said.

During the public comment period, a handful of Athens residents and business owners spoke out against the plan.

Eubanks added that the focus for downtown development shouldn’t be “building for just tomorrow,” but rather building for the people who are going to stay in Athens beyond the four years it takes to earn a degree.

Melissa Link, newly elected District 3 commissioner, said, “Maybe it is time to readdress our codes…  I don’t think this is the time to be granting waivers.” She added that this plan would be “displacing some downtown businesses” and suggested incentivizing community development agreements to ensure local businesses could prosper in the proposed retail spaces.

Erica Parson, founder and executive director of Hatch Athens, said she owns one of the downtown businesses that Link mentioned and reiterated Link’s concerns. “The student housing we already have is enough,” she said.

After the public comments, the planning commission discussed the plan, and all who spoke were in agreement that a waiver for the residential density increase was not a good idea.

“I could never support a density increase,” said Paul Dellaria.

Hank Joiner concurred with the idea to incentivize community development. “Maybe it’s an opportunity to work with young businesses,” he said. “I’d like to see if there is a way to help young businesses get back into the community and stay in the area.”

At the end of the meeting, Diedrich told Flagpole that the company understands a lot of the concerns and would be going back to “rework the project” to find a way of adhering to more of the zoning requirements.

“We can reduce the density by changing the configuration of the unit mix. Maybe do more ones and twos to maintain the same shape of the building while reducing the actual density count,” he said. “We’ll be doing our homework.”

Clint McCrory said, “It’s remarkable how many things are wrong with [the Campus Acquisition plan].”

District 6 Athens-Clarke County Commissioner Jerry NeSmith, a former planning commissioner, said it reminded him of the first proposal of the Hyatt Place hotel, which is set to be built next to the Classic Center. “Their first design looked like something that belonged on the interstate,” he said. “They heard the objections of the planning commissions and came back with a very appropriate design in my mind. This is the same kind of thing, these guys are coming in with a plan that just doesn’t fit our community.”

“They’ll have to make a lot of changes,” McCrory said.