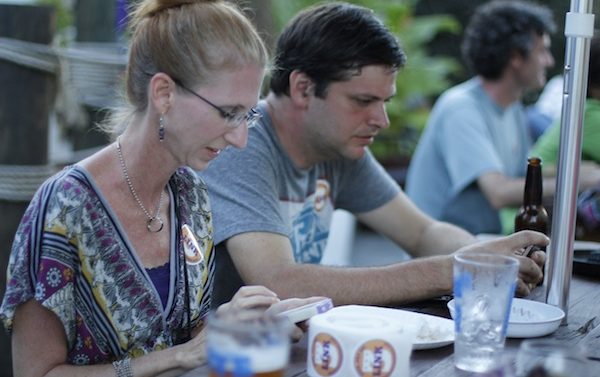 Athens-Clarke County’s new District 3 commissioner is Melissa Link, who won the runoff tonight with 54 percent of the vote, 436 votes to 372, in a low-turnout second round of voting.

In a celebratory speech at Little Kings, Link said she was “ready to work hard,” including pushing her agenda to move forward on better transportation, having serious discussions about downtown development and increasing transparency in local government.

The longtime activist also said she hoped for better participation: “I want to encourage you to come approach the podium [at commission meetings] because I won’t be doing it anymore.”

Rachel Watkins declined to comment, but her campaign manager, Shaye Gambrell, said there were still “glitches in the reporting” of the numbers.

“We’re disappointed, no doubt about that,” Gambrell said. “Over the past seven years, there’s been a dearth of good news reporting.”

ACC election officials said all votes were counted except a small number of provisional ballots—not enough to put Watkins over the top.

Gambrell added that Flagpole made voters feel they needed an “activist” in this position.

“I think RW would have been a very progressive, collaborative, energizing spirit on the commission, and I’m afraid that now we’re going to be looking at the same polarized goverment that we see nationally,” she said.

“We always need an activist,” said Link, responding to comments from Gambrell.

Link and Watkins, both from Boulevard, were the two survivors of a May 20 election that pitted them against Herb Gilmore and Dustin Kirby.

Because of redistricting, “We knew that an African American couldn’t get elected, and we need to represent them,” Link said.

UPDATE: Watkins released a statement this morning congratulating Link on her victory.

It was an honor to run for District 3 Commissioner and I am grateful for the opportunity. Running for this office afforded me the chance to develop relationships and friendships with the community in ways I couldn’t have otherwise. I am a better person because I ran and my children have been affected in positive ways you cannot imagine. Thank you for all the support and encouragement from so many.
Those who serve Athens-Clarke County as elected officials sacrifice more than most imagine. I know District 3 will be represented by someone with passion and vigilance: Melissa Link.

News editor Blake Aued and intern Stephanie Talmadge contributed to this report. This post has been updated to correct Watkins’ place of residence.

Fuze and BuzzFeed Want You to Visit the ‘Athens Theatre’