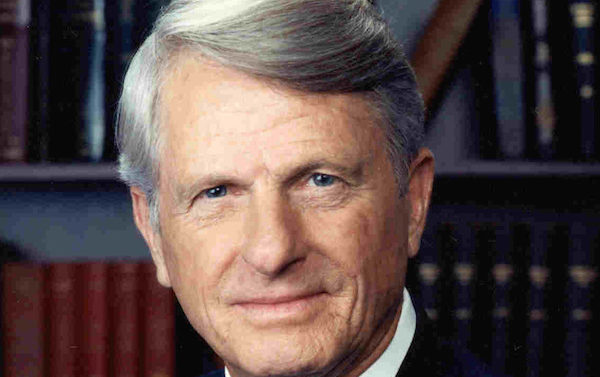 Zell Bryan Miller, who died last week at the age of 86, was known throughout his political career by the nickname “Zig-Zag Zell.” It was a moniker that was honestly acquired.

He could be charming and humorous when he wanted to be. I remember one time, during Miller’s brief tenure in the U.S. Senate, when he dropped by the capitol during the legislative session. We asked him if he was planning to run for a full term in the Senate. “I’m not planning anything,” Miller quipped. “At my age, I don’t even buy green bananas.”

Some years later, when Miller had retired to his home in Young Harris and, I was making regular appearances on the Georgia Public Broadcasting show “Lawmakers,” Zell would tell me, “Tom, I want you to know that me and the dogs get down on the floor every night and watch you on Lawmakers.”

But there was another side to him, as his nickname implied. If I wrote something that criticized him or was insufficiently worshipful, he would call my office and leave an angry message that usually ended with the words, “I’ve just about had a bellyful of you!”

He was an executive secretary to Lester Maddox, the notorious segregationist, during Maddox’s term as governor. But he finished out his own tenure as governor having appointed a record number of women and African Americans as judges.

Perhaps his most notorious zig-zag was in his choice of political parties. Miller was born in 1932, in the deepest pits of the Great Depression, in one of Georgia’s poorest mountain areas, Towns County. His father died less than a month after Zell’s birth, leaving him to be raised by his mother, Birdie.

That hardscrabble upbringing made him a Democrat and informed one of the most eloquent speeches he ever delivered, the keynote address to the 1992 Democratic National Convention at New York’s Madison Square Garden in support of Bill Clinton for president.

“Listen to this voice,” Miller said that night. “It’s a voice flavored by the Blue Ridge; a voice straight out of a remote valley hidden among the peaks and hollows of the Appalachian Mountains—a voice that’s been described as more barbed wire than honeysuckle. That this kind of voice could travel here from a forgotten corner of Appalachia is a testament to the grace of God and the greatness of the Democratic Party…

That was the final straw for many of Zell’s Democratic colleagues, who broke longstanding ties with him and tried to have him kicked out of the party. Miller went on to endorse both Democrats and Republicans during the remainder of his life, but he never changed his party designation.

“I was born a Democrat. It’s not simply a party affiliation,” he wrote. “It’s more like a birthmark for me and many of my fellow mountaineers… I would no more think of changing parties than I would think of changing my name.”

Regardless of the party designation you assign to him, Miller left behind an impressive legacy that included the Georgia Lottery and the HOPE Scholarship fund, two innovations that made it possible for hundreds of thousands of students from humble backgrounds to attend a state university.

Zell Miller could be an aggravating cuss, no doubt, but he made a mark on Georgia politics that will be felt for a long time.