Legislators Turn on Sheriff Who Compared Them to Lucifer 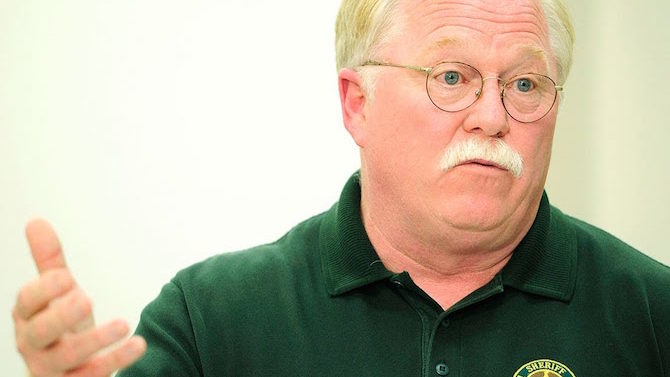 It was a sight you seldom see at the General Assembly: legislators openly attacking a Georgia sheriff. Their target was Putnam County Sheriff Howard Sills, who took some hard shots at Gov. Nathan Deal last week over the latest chapter in Deal’s efforts to revise the state’s sentencing laws and criminal justice procedures.

“This governor has done more for those who perpetrate crime than Lucifer and his demons combined, and every piece of his criminal justice reform that has been passed into law has complicated or burdened our duties and/or endangered the citizenry of our state.” Sills said in an outraged email to members of the Georgia Sheriffs Association. “Never, never, in this state’s history has the criminal element been coddled and fostered as it has been over the last 7 years.”

After the criticisms were reported in the media, House members made angry speeches turning the political attacks back on Sills. “Are you serious?” asked Rep. Scot Turner (R-Holly Springs). ”Because we treat people as human beings in the criminal justice system that we somehow are worse than Lucifer, than the devil?”

“It’s an insult to me, and you should be insulted,” said Rep. John Meadows (R-Calhoun), chairman of the powerful Rules Committee, who called Sills’ criticisms “a bunch of crap.”

“When I read those comments this morning, I got sick to my stomach,” House Speaker David Ralston said. “Few things in my public career have I found as disgusting and deplorable as that statement made by a man who wears a badge. They are wrong and they are an embarrassment to an honorable profession.”

It was an amazing spectacle, because sheriffs are among the most powerful local officials in the state. Legislators would ordinarily be hesitant to attack them in public. You may not like or agree with your local sheriff, but you don’t want to get on the wrong side of him in a public dispute.

Sills was unrepentant. When asked later if he stood by his criticisms of Deal, he said, “I believe that, and by God, I have the right to say it.”

Deal’s criminal justice efforts, which have tried to reduce the population of the state’s prison system by providing such alternatives as drug accountability courts and lighter sentences for non-violent offenders, have generally received high marks from legislators of both parties.

“As a result of our efforts, fewer Georgians were committed to prison last year than any time in the past 15 years, thereby saving millions of taxpayer dollars and keeping families and communities intact,” Deal said in releasing his latest proposals. “From 2008 to 2016, Georgia experienced simultaneous decreases in overall crime, down 24 percent, and imprisonment rates, down 6 percent. In 2017, Georgia saw the lowest number of overall prison commitments since 2002, and the lowest number of African-Americans entering the prison system since 1987.”

Senate Bill 407 would allow judges to take a defendant’s ability to pay into consideration when setting bail for misdemeanor offenses—a move away from cash bail requirements in some instances, which some local governments are already doing. The bill would give judges more flexibility to convert monetary fines into community service, another way to keep low-income defendants out of jail simply because they lack the money to pay a fee. SB 407 would also impose stricter penalties on firearm-related criminal offenses.

None of those proposals call for opening the doors to the state prison system and releasing hordes of hardened felons to prey on innocent Georgians, contrary to the impression you’d get from reading Sheriff Sills’ diatribe. It was so over the top it brought on a reaction you almost never see from legislators—a reaction that I suspect most sheriffs would rather not find themselves caught in the middle of.