Georgia Shows the Real Reason Why Coal Is Dying 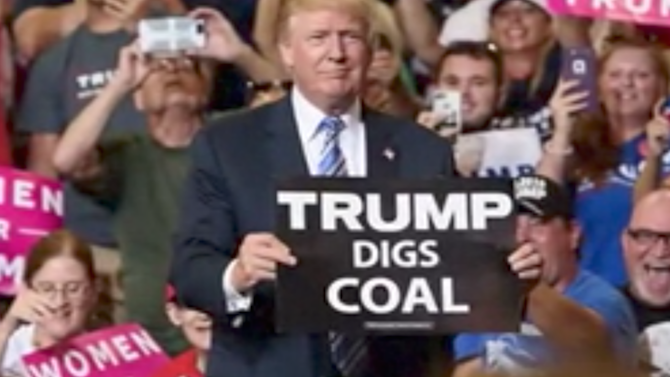 Donald Trump promised that he would single-handedly halt the decline of the nation’s coal industry and bring back lost jobs for coal miners by nullifying the environmental restrictions on coal that were proposed during Barack Obama’s administration.

The most visible sign of the president’s intentions was a news conference held last week in Hazard, KY, in the heart of the nation’s coal mining region. The head of the Environmental Protection Agency announced that the department was rejecting Obama’s Clean Power Plan that would have required utilities to reduce the amount of greenhouse gases emitted through the burning of coal by their power plants. “The war on coal is over,” said EPA Director Scott Pruitt, a global warming denier.

The “war on coal” as described by Trump and Pruitt may indeed be over, but the coal industry is still in a steep decline, with job numbers sinking to all-time lows. Even supporters of coal acknowledge that those old mining jobs probably aren’t coming back anytime soon.

Where the coal industry employed about 250,000 people in the 1970s, the number of coal jobs today is estimated at less than 70,000. By contrast, the retail chain Costco employs 143,000 people in its U.S. stores, more than twice the number who work in coal mines—and Costco employees don’t have to worry about getting black lung disease.

Some of the president’s top policy people agree that the use of coal as a primary source of energy is winding down. “Coal doesn’t even make that much sense anymore,” Gary Cohn, Trump’s chief economic adviser, told reporters recently. Cohn was referring to the factor that more than anything else has killed coal: the low price of natural gas made possible by the widespread practice of fracking. Natural gas is a little cleaner and cheaper to burn than coal, so electric utilities have increasingly been choosing gas over coal.

We can see that happening in Georgia with the state’s largest utility, Georgia Power. At one time, Georgia Power generated about 70 percent of its electricity from coal-fired power plants. Today, the portion of power generation from coal is about 30 percent.

Georgia Power is just one of many utilities making this decision. Since 2010, nearly half of the country’s 523 coal-fired plants have been closed or are being phased out. This is happening even in West Virginia, one of the nation’s biggest coal-producing states. West Virginia’s leading utility, Appalachian Power, has closed three coal-fired plants in recent years and converted two others to gas.

Other factors in the declining use of coal are the increasing deployment of solar- and wind-powered generation facilities. As the price of alternative energy continues to come down, it is expected to eat into coal’s share even more. That would mean even fewer jobs for coal miners.

The real killer of the coal industry hasn’t been onerous federal regulations; it has been free market forces. Utilities know there are cheaper sources of power than coal, and they are choosing those cheaper sources, regardless of what the president might say.