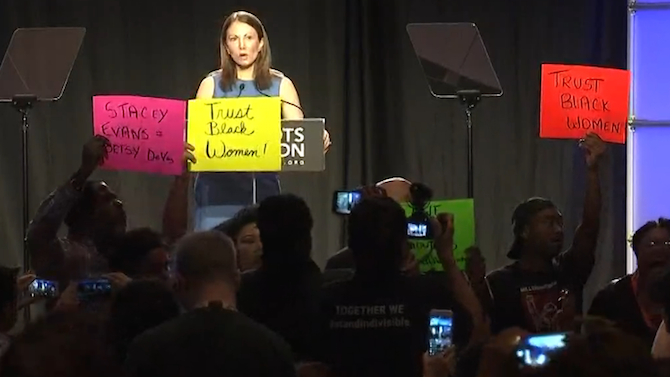 Democratic voters have their choice of two Staceys in next year’s primary for governor: Rep. Stacey Abrams of Atlanta or Rep. Stacey Evans of Smyrna.

There are some striking similarities between the two contenders. They are both attorneys and are two of the most intelligent members of the General Assembly. On the major issues, they have taken similar progressive stands. While there have been some minor differences here and there, both of them have accomplishments in the legislature they can take pride in.

There is one major point of distinction between the two candidates: Abrams is black, and Evans is white.

They have different visions of where they think the Democratic Party should be going. Abrams wants to energize black voters who may not have previously been engaged in the political process. Evans wants to try to reconnect with working class whites. You can make a decent argument for both approaches. But the events of last weekend show that there may be a racial divide coming that rips the party in two.

The occasion was Netroots Nation, a yearly gathering of 3,000 or so progressive activists that was held in Atlanta this year. Abrams gave a rousing speech to the activists on the convention’s first day and received a standing ovation from the crowd. When Evans spoke on Saturday, however, it was a much different story.

It was nearly impossible for Evans to get through her 10-minute speech because pro-Abrams protesters were chanting loudly and shouting her down. The protesters turned their back on her as they waved signs reading “Trust Black Women” and “Evans = DeVos,” a reference to Donald Trump’s education secretary, Betsy DeVos.

The racial animosity displayed towards the white candidate could spell big trouble for Democrats. If the activities at the Netroots Nation conference are any indication, this is a primary election that could get very ugly before it’s all over. You could easily have a situation where Abrams wins the primary by energizing black voters, but in the process turns off white voters who don’t bother to come out and support her in the general election. Similarly, if Evans were to win a bitterly contested primary race over Abrams, that could result in demoralized black voters staying at home during the general election.

We’ve seen this kind of division tear apart the Democratic Party before. Back in 2006, the party’s two major candidates for governor were Lt. Gov. Mark Taylor and Secretary of State Cathy Cox (both white). They were the party’s brightest stars at that point in time. Taylor had served in the state Senate before winning two terms as lieutenant governor. Cox had been a member of the Georgia House before winning two elections for secretary of state.

Taylor trailed Cox in the polls during the early months of a primary race that degenerated into name-calling and mudslinging in the final weeks. It became a political bloodbath between two candidates who clearly had a deep personal dislike for each other. Cox and Taylor both aired hard-hitting commercials that accused each other of lying and double-dealing. Taylor’s campaign, for good measure, also filed two civil lawsuits against Cox and her aides.

Taylor eventually prevailed in the slash-and-burn primary, but it was an empty victory. The nastiness of that campaign turned off quite a few Cox supporters who either sat out the general election or voted for the Republican incumbent, Sonny Perdue. In November, Taylor drew barely 38 percent of the vote in a crushing loss to Perdue. It was the worst showing ever by a Democratic nominee for governor in Georgia.

Is the Democratic Party headed for a similar debacle because of the upcoming battle between the two Staceys? Right now, the signs seem to be pointing that way.