Is Paul Broun the Senate Frontrunner? 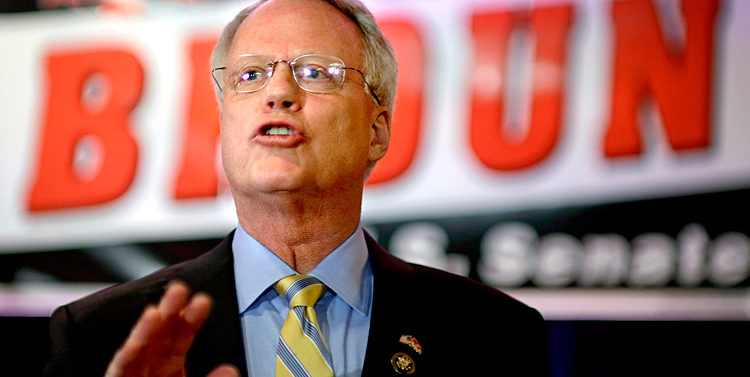 It is too early to predict who will replace U.S. Sen. Saxby Chambliss, but it’s going to be the most entertaining race voters have seen in a long time.

The Democratic nominee will most likely be Michelle Nunn.  As the daughter of retired senator Sam Nunn, she should be able to raise more than enough money to win that primary.

The Republican side is the one to watch, because you have five credible candidates who will be gouging and biting each other all the way to the May 20 primary. The candidate who stands out is Rep. Paul Broun, the ultraconservative congressman who insists that the earth is only 9,000 years old and that the classes he took in medical school were all “lies straight from the pits of hell.”

The prospect of Broun actually winning the nomination is causing some sleepless nights for establishment Republicans.  They are convinced nominating such an extremist will enable Democrats to win the seat. Broun doesn’t appear to be disturbed by those criticisms, however, and he is setting the standard that nearly everyone else is trying to achieve.  Broun’s opponents have been trying to position themselves as being even more conservative than he is—a feat that just isn’t possible under the current laws of physics.

This has resulted in such developments as Rep. Jack Kingston, a somewhat moderate politician, demanding that poor children be forced to sweep out the cafeteria before they are allowed to eat a federally subsidized school lunch. “Why don’t you have the kids pay a dime, pay a nickel to instill in them that there is, in fact, no such thing as a free lunch?” Kingston asked. “Or maybe sweep the floor of the cafeteria… think what we would gain as a society in getting people, getting the myth out of their head that there is such a thing as a free lunch.”

Kingston’s controversial remark was too much for one of the other Republicans in this primary: David Perdue, the retired business executive who is a cousin of former governor Sonny Perdue. “With all the nonsense worth criticizing in Washington right now, Congressman Kingston chose to ridicule children who, through no fault of their own, rely on free school lunches,” Perdue said. Perdue set himself up as a moderate candidate with that comment, but Georgia Republicans are a very conservative group—it could ultimately hurt him.

Rep. Phil Gingrey has also been working hard to show voters how conservative he is. Gingrey may have gone a little too far, however, because he’s been scaring off his own people with some of his rhetoric.  Four of Gingrey’s top staffers abruptly resigned from his campaign shortly after he complained that, as a member of Congress, “I’m stuck here making $172,000 a year.”

The other major Republican candidate is former secretary of state Karen Handel. Handel’s weakness has always been her inability to solicit contributions from her supporters.  She lags behind the other candidates in raising money, although her aides contend she can overcome that with the help of grassroots organizations she put together in earlier statewide campaigns.

Broun doesn’t raise that much money either, but he has already proved he doesn’t need a lot of money to win an election. His supporters are so committed to Broun’s cause that they would seemingly crawl naked over two miles of broken glass to cast their ballots for him on election day.

At this point, the Republican primary looks like a battle among the four other candidates to see which one can make it into a runoff with Broun. It will take a little more sorting out before we know who that other candidate will be, but it’s going to be fun to watch the process unfold.