Hate, not Heritage: The Persistence of States’ Rights as a Fig Leaf for Racism 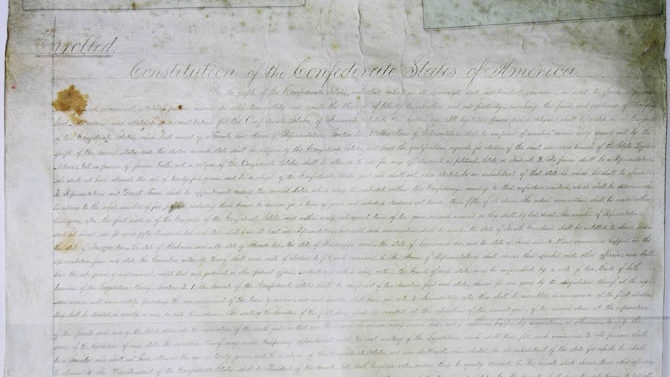 Yet again, over 150 years after Appomattox, we’re still at one another’s throats about the meaning of the horrendous bloodletting that ended with a half-page of surrender terms and a handshake. The proximate trigger for the recent mayhem in Charlottesville, VA and elsewhere was the city’s plan to remove a monument to Robert E. Lee. Now the air is thick with denunciations of similar monuments for valorizing traitors, and defenses of them for celebrating “heritage, not hate.” How can we still be doing this? Why do we keep re-enacting ancient conflicts seemingly without end?

If slavery is America’s original sin, buried deep in our political DNA is the states’ rights fig leaf for the armed defense of it. Before the U.S. Constitution, there were the Articles of Confederation. Wait, don’t check Facebook! We need to understand this because, believe it or not, there are still people out there who’ve never reconciled to the “more perfect union” promised by the Constitution and see the states’ place in our federal system in Articles of Confederation terms. Whether they could tell you the story that I’m going to, there were people who came to Bobby Lee’s defense in Charlottesville who’ve bought into a dumbed down version of it.

So, Articles of Confederation. Right after the first article names the country that it establishes as “The United States of America,” the very next article basically cancels “united.” It says, “Each state retains its sovereignty, freedom and independence, and every power, jurisdiction and right, which is not by this confederation expressly delegated to the United States, in Congress assembled.”

Right up front, the document makes clear that it’s nothing more than a treaty among friendly countries, each of which is its own final judge of whether the other parties are living up to the deal and is free to withdraw from it any time. This is states’ rights on steroids.

So unstable was that arrangement that the 1787 Constitutional Convention went beyond its charge from Congress just to tweak the Articles. Instead it tossed them out and started over.

About 10 years later, Thomas Jefferson invited the Kentucky Legislature to sign off on a bunch of resolutions he’d written. Never mind about what. What’s important for this story is that they made clear that he saw the Constitution as just an updated version of the Articles of Confederation. In other words, he thought the Constitution, like the Articles, was a treaty among sovereign countries, sort of a mutual defense pact. Here, let him tell it: After saying that the Constitution is a “compact” among the “several States,” he wraps up with, “…as in all other cases of compact among powers having no common judge, each has an equal right to judge for itself, as well of infractions as of the mode and measure of redress.”

That’s exactly the Confederation model. “Powers” each having an equal right to judge whether the others are living up to the terms of the pact are sovereign states that have entered into a non-binding treaty with one another. It’s non-binding, because there’s no “common judge” to ensure that all the parties abide by the treaty’s terms. States’ rights on steroids again.

When Jefferson pitched his resolutions to all the other states, he got no takers except for Virginia. Seven states thought Jefferson’s handiwork so incendiary that they adopted resolutions rejecting it, prophetically, as an incitement to disorder and even civil war.

Jefferson had his reasons, which I won’t bore you with, for writing his resolutions. But it’s hard to believe that he didn’t know he was egregiously misreading the Constitution. It was ratified in the states but not by the states. When the Constitutional Convention finished its work, the document circulated around among the states, but not for their legislatures to ratify. Rather, each state called a separate, single-purpose ratifying convention whose delegates were elected by a special procedure. Only after nine of the ratifying conventions signed off on the Constitution did it go into effect. That’s why the Preamble begins with “We the People,” not “We the States.”

But the Preamble papered over the fact that there was fierce if gentlemanly debate in the ratifying conventions about just how much power the allegedly sovereign, independent states would enjoy under the proposed Constitution. There was probably no issue that preoccupied the delegates more. And many of them who voted against ratification did so because they thought the Constitution handed over too much power to the federal government. Unmoved by the arguments of fellow delegate James Madison, the Constitution’s principal draftsman, one of those voting against the Constitution in Virginia was Patrick Henry, of “give me liberty or give me death” fame.

And he had plenty of company. Fast forward to the administration of Andrew Jackson, which featured a runup to the Civil War over, of all things, tariffs. South Carolina (who else?) bristled under some federal tariffs and claimed the right to ignore them within its borders. After a lot of brinksmanship, which put at loggerheads Jackson and John C. Calhoun, another advocate of states’ right on steroids and Jackson’s vice president at the time, both sides climbed down. But the idea that a state has a right to blow off any federal measure that state authorities believe to be unconstitutional didn’t just go away.

We the People? No, We the States

Less than 30 years later, on July 4, 1861—not long after South Carolina’s attack on Fort Sumter in Charleston Harbor—President Lincoln, in a special message to Congress, gave an impassioned if lawyerly argument against the Articles of Confederation model, according to which the Constitution is nothing but a “compact” of sovereign and independent states that have the right to withdraw from it at will. If you define sovereignty as “a political community without a political superior,” he said, then excepting only Texas, none of the states were sovereign powers outside the Union. And if not outside it, then not inside it either. We know how much weight his lawyerly argument carried.

If only this were all arcane ancient history. But the states’ rights fever never broke, spiking again and again after Appomattox, maybe never more virulently than after the U.S. Supreme Court’s 1954 decision striking down school segregation. Just a few years later, when then Alabama Governor George Wallace defied a federal court order to admit two African Americans to the University of Alabama, he claimed to be acting in the name of “the sovereign state of Alabama” against the “illegal usurpation of power by the Central Government.”

And not 10 years ago, the states’ rights fever dream broke out again when the “state sovereignty” movement, ginned up by the conservative Heritage Foundation and the equally conservative American Legislative Exchange Council, saw more than half the nation’s state legislatures adopt resolutions that largely reproduced Thomas Jefferson’s Kentucky Resolutions of 1798, reviving the undead Articles of Confederation reading of the Constitution. Chip Pearson, then a Republican member of the Georgia state Senate from Dawsonville, described the resolution as reaffirming “our rights as a sovereign state” against a federal government running way out of its lane. (You remember who was president in 2009, right?) Dismissing newspaper editorials raising the same alarms that rang in Jefferson’s ear, Pearson soothingly characterized the Senate’s resolution as no more than “common sense” based on principles of “Jeffersonian democracy.” Obviously he either didn’t know or didn’t want anybody else to know about the reception Jefferson’s resolutions got in 1798.

And just recently I watched an interview on PBS with a spokesperson for the South Carolina Secession Party, whose platform didn’t even mention secession but was big on “flagging” as many public places as possible with the Confederate battle flag, all in the name of “heritage, not hate,” of course.

So what about those flags, monuments, plaques, markers and other echoes of the Confederacy? The “heritage” they celebrate isn’t magnolias, mint juleps and Moon Pies. It’s the claim of state “sovereignty, freedom and independence” that goes all the way back to the Articles of Confederation. And that’s the heritage that still tragically rationalizes and enables the white supremacist hate. In part, what’s made “heritage” the brain-eating zombie that refuses to die is that people who want to hide behind it from the unforgiving moral clarity of our Charlottesvilles can invoke the names of luminaries like Jefferson and Henry.

By all means, then, let’s have the conversation about flags, monuments and the rest. But even if they’re consigned to museums, cemeteries or scrap heaps, let there be no illusions about the persistence in too many minds of the “heritage,” spawned in the earliest days of the republic, that abetted the flags and monuments in the first place.